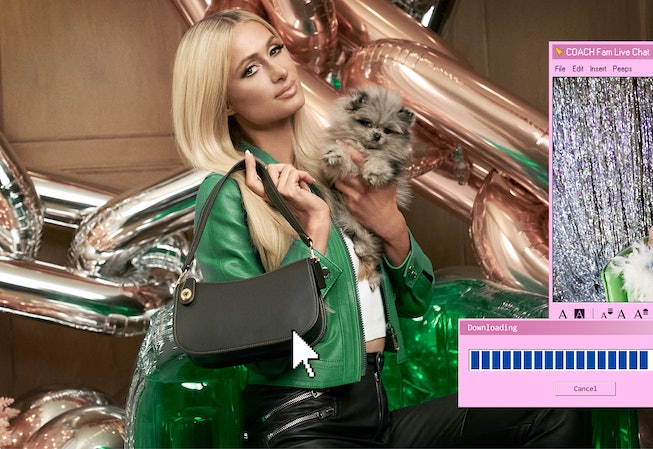 Coach has released its new Y2K-inspired campaign, and its tapped none other than early-aughts pioneer Paris Hilton to lead the charge. Hilton stars alongside Rickey Thompson and Kim Petras in the campaign for the brand's reimagined Swinger bag. The trio also starred in a campaign video, gushing over the new handbag in a pinked-out, retro AIM-style chatroom.

Hilton has a personal connection to the brand, telling Vogue that she still remembers the first time she got her own Coach bag as a teenager in New York. The socialite has been an avid handbag collector for years, though she admits to cleaning out some of her favorites during the early 2000s.

"Because now the 2000s are coming back in such a huge way in fashion. There's so many things that I thought, 'This isn't in fashion anymore, just get rid of it.' And now I wish I hadn't, especially my Dior monogrammed [bags]," she said. "A lot of stuff, too, was stolen by the Bling Ring. They literally came in here eight times when I was out of town, and every time they would pick up as much as they could fit in their arms. They stole like all my Birkin bags, all of my iconic Dior bags, my Louis Vuittons — anything that was designer, they took. It's heartbreaking because I'll never be able to replace any of that."

Fortunately for Hilton, brands are jumping back on the early-aughts trend. She can now add Coach's Swinger bag to round two of her collection.

Check out the photos and video from the new campaign, below.