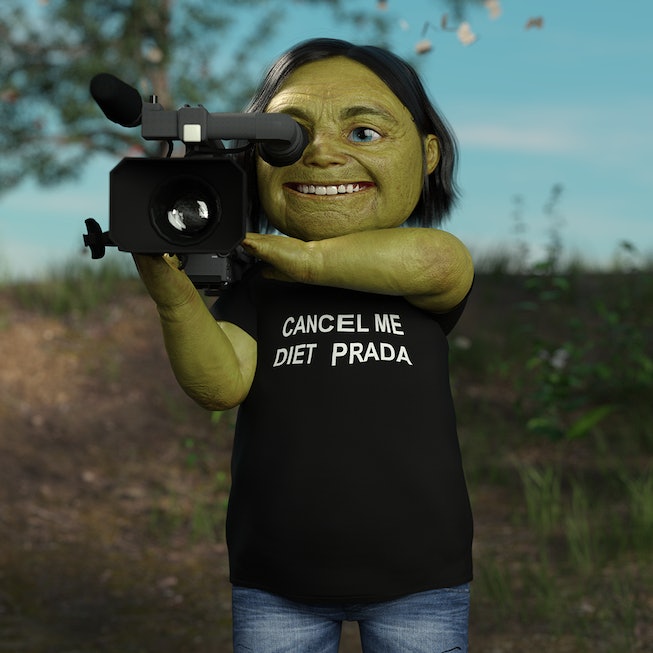 It's another weird, mostly virtual New York Fashion Week, made even weirder by the dudes over at Pizzaslime. The pop culture-obsessed merch and marketing brand, led by Nick Santiago and Matthew Hwang, made its official fashion week debut on Tuesday with a bizarre animated presentation showcasing graphic T-shirts emblazoned with logos and tongue-in-cheek nods to the current zeitgeist.

Their entrée into the fashion world may be a head-scratcher for many, but no more than to Pizzaslime founders themselves.

"The fact that we just did an official NYFW show is hilarious to us personally because it is so unexpected and something nobody probably thought was even a possibility for a brand like us (including ourselves)," they told NYLON in an email.

Though Santiago and Hwang admit they've never approached their brand from a fashion perspective, their infiltration into the industry is undeniable. From the first launch of unofficial Erewhon merch, worn by everyone from Sophie Turner to Jonah Hill, to a phone case collaboration with cool girl-favorite Wildflower, Pizzaslime is fashion. Even if it's just ironically.

Ahead, Santiago and Hwang spoke to NYLON after their inaugural fashion week presentation to discuss the experience and what's next for the New York Fashion Week-official brand.

Why did you decide to put on a show for NYFW?

NS & NW: This opportunity honestly just fell into our lap and we had to take it. The fact that we just did an official NYFW show is hilarious to us personally because it is so unexpected and something nobody probably thought was even a possibility for a brand like us (including ourselves). We really never thought something like this would happen and the fact that it was all primarily streamed gave us a real opportunity to participate in our own unique way. If there was ever a time and place for us to jump into NYFW and the fashion world in general, this was it. We hope we get to do it again because now we have a million other different kinds of ideas for presenting our work.

How did you decide what to present during the show?

First off, we don't do standard traditional "fashion" so we don't think in a fashion brand/world mindset. We have literally never developed a collection before with a theme or purpose. That was a fun challenge. Everything about this was new to us. We weren't really sure where to start but the concept all birthed from a conversation with the super talented animator and director we worked with, Cole Kush and Dan Streit. We sort of thought of a show concept together then worked backwards. We figured out what we wanted to say with the presentation then started designing shirts around that concept.

The "got fame?" collection is a reflection of our obsession with society's obsession with celebrity hitting all-time highs and the insanity of the celebrity news cycle in our world. Nobody is immune to these celebrity obsessions (including ourselves). Celebrity news sources like TMZ and Us Weekly are the new religion that’s shaping world views and how individuals see themselves internally and externally more than ever. Through the collection we also speak about cancel culture's effect on our relationship with art and how it can even paradoxically help build careers instead of ending them. "We live in a society" LOL.

What are your thoughts on merch becoming more popular in fashion?

From our perspective, fashion has always been about attention. Whether that's through bold colors, progressive silhouettes, or an overarching message. Today, attention is measured by clicks and social engagement, which has allowed the person wearing a T-shirt (or whatever else people consider merch) to capture the same attention as wearing something expensive and pretentious. Of course, everything in moderation is necessary to maintain taste, as well as a true personal style. Similar to how crypto is enabling the retail consumer to assign value to whatever they want (without the need to involve the old guard), Pizzaslime provides the everyday consumer the ability to achieve the same attention value of an awesome $400 cut-and-sew item with a simple $33 T-shirt.

What do you think of the current fashion industry? How do you see Pizzaslime fitting into that?

Honestly we don't think anything about it. I think that is the industry's problem. It just is. Everything new feels different but the same. It feels like everyone is still trying to "be fashion".

We're not sure we can fit into fashion but we could open a pit (as in a mosh pit) in it and make our own space. We think fashion is funny and we don't take it seriously. We do not want to "be fashion." The fact that we are even talking about this right now is funny to us.

What's next for the New York Fashion Week-official Pizzaslime brand?

Later this year, an animated series we sold to Amazon that portrays a comedic perspective on the culture of streetwear comes out and we're also developing sick new show concepts now with some pretty big people in the TV/streamer world. We also have a record label called Pizzaslime Records with Diplo, so we're going to continue to release some new music.

Also, we're consulting and working on some rad new projects as a boutique creative/marketing agency for Crocs. As a brand, we want to continue to do what we do and also start to think about collections like we did for NYFW. We're sitting on a Sopranos bootleg collection that is super awesome and left field. It would be fun to do more of this kind of NYFW stuff and we know we could keep up and continue to disrupt the space with our own approach to it. ... WAIT, DID YOU JUST MEAN WHAT'S NEXT IN FASHION?

NEXT UP
The Art Issue 2022
True Life: My Partner Is Obsessed With NFTs
Culture
An Exhaustive Breakdown Of The Balenciaga Controversy
Culture
Mowalola Teams Up With Bratz For A Daring, High Fashion Collection
Fashion
Reformation & Canada Goose Team Up To Warm You Up