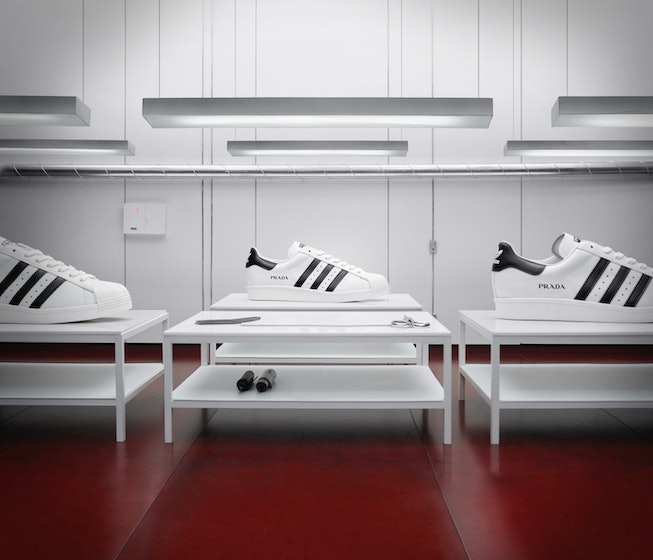 The beloved Adidas Superstar sneaker is getting another Prada boost. The new shoe style is the next release in what is an ongoing collaboration for the two brands, which originally dropped with a limited-edition sneaker and bowling bag in Decemeber 2019.

As for the sneaker, it's the classic three-striped Superstar (to celebrate its 50th anniversary) with an added Prada logo stamped on the side. It will be available in three colorways: monochrome black, white with black, and chrome silver with white.

While Adidas and Prada haven't released too many details about their upcoming collaborations, they did say that their next launch will be inspired by the America's Cup sailing race, which Prada has been a part of since 1997.

According to Hypebae, a new take on Prada's America’s Cup sneaker with Adidas leaked in early August. The new (albeit rumored) version is a clear-and-white shoe made partially from translucent TPE material with the signature red Prada Sport Linea Rossa motif.

For now, the only official shoe that's on the way is the new Superstar, set to launch on September 8 at Prada boutiques and adidas flagship stores worldwide, as well as on the Prada and Adidas websites. While the new announcement didn't reveal a price, Hypebae reported that they're going for a cool $510.

Check out photos from the new campaign, below.