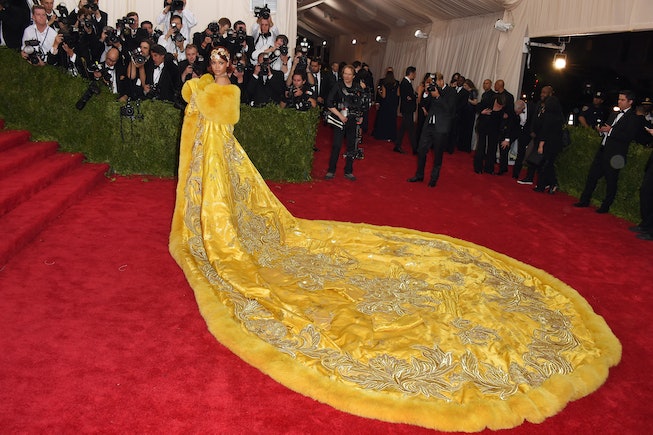 Rihanna's 2015 Met Gala gown has a place in the annals of fashion history as one of the best. The custom-made couture gown by Guo Pei took two years to make and weighed around 55 pounds. Despite Rihanna shutting down the entire red carpet that year, she recently admitted that she had some insecurities over wearing the gown.

"I remember being so scared to get out of that car because I felt like, 'I'm doing too much.' I was driving past the red carpet and I was just seeing gowns," she told Access. "I was like, 'Oh my god, I'm a clown, people are gonna laugh at me. This is too much."

She went on to say that she ended up circling the red carpet in her car three times before getting the courage to finally step on to the red carpet saying, "Finally I was like, 'Whatever, let's go. Let's just go. I don't regret it.'"

As she shouldn't. The look secured Rihanna's position as a fashion powerhouse and Met Gala staple. (Her after-party looks aren't too bad either.) Seriously, if Rihanna isn't stepping foot on the red carpet, there's no point in having it.

Check out the full Access interview below, where Rihanna also discusses her progress on R9. Warning: It will not make you feel much better.