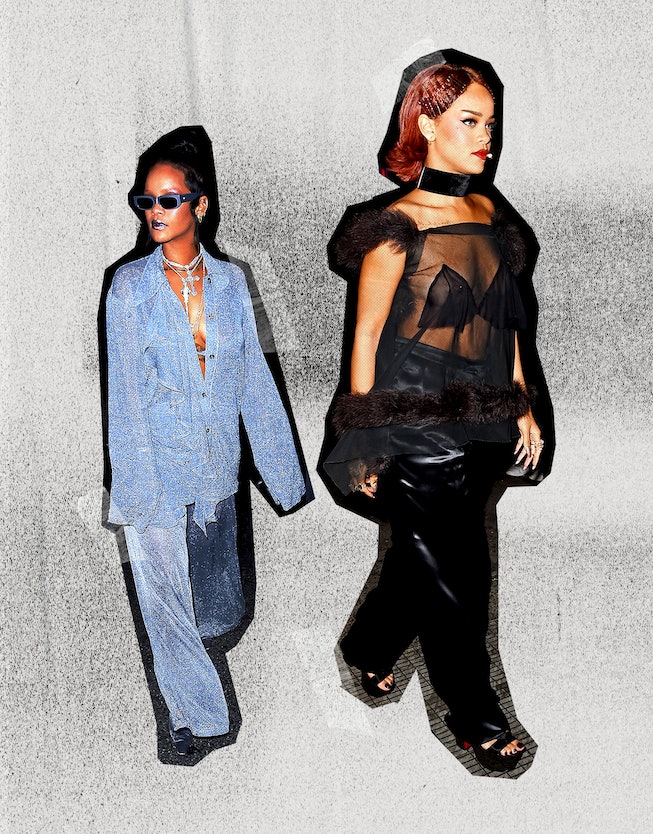 From her Guo Pei couture gown in 2015 to the John Galliano Pope-inspired outfit in 2018, Rihanna is the undisputed queen of the Met Gala. Her red carpet looks for the major fashion event check all the boxes and then some; they’re on-theme, over-the-top, and so fancy that they could bring Anna Wintour herself to tears.

We're all familiar with Rihanna's looks for the Met Gala. In addition to her aforementioned ensembles, we can't help but mention her Comme des Garçons outfit in 2017, along with the Stella McCartney gowns that she wore in both 2011 and 2014. (If we had to choose, the latter — a two-piece, midriff-baring white look — is our favorite.) But we're not here to wax poetic on what we already know about Rihanna's Met Gala fashion choices. We're here to appreciate her after-party looks for the event.

While Rihanna's red carpet looks are the epitome of high-fashion glamour, her post-Met Gala choices are decidedly more casual. She essentially wears pajamas, but this is Rihanna we're talking about, so they’re very cool pajamas.

The world will miss out on some sure-to-be historic fashion on Monday due to the Met Gala’s indefinite postponement, but the biggest loss will be felt from a lack of Rihanna, who makes sure her post-gala look is just as good as what she wears on the red carpet. To fill this void, we present her best after-party moments, below, which may indirectly offer some quarantine fashion inspiration, too.

Rihanna shut down the 2015 Met Gala, quite literally, in her yellow gown by Chinese couturist Guo Pei. After wearing the most glamorous gown of the evening, her after-party look was shockingly simple, wearing an all-black Maison Margiela lingerie-inspired outfit that looked significantly more comfortable.

After winning the 2017 Met Gala in her floral Commes des Garçons dress on the red carpet, Rihanna changed into a feather-trimmed silk bed shirt by Prada, pairing it with feather slip-on heels and oversized Gucci sunglasses.

It's a lot of work being a fashion-savvy Pope, as Rihanna learned after the 2018 Met Gala. Once the red carpet wrapped, she changed into a flowing, sparkling set by Nina Ricci in the best off-duty clergy look the world has seen.