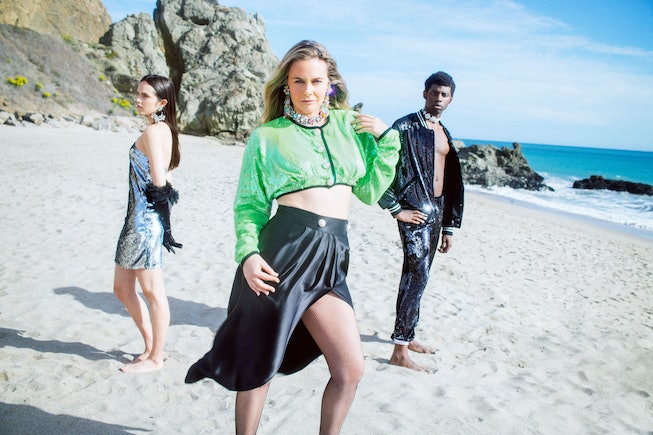 In some alternate universe, there is a future where Cher Horowitz becomes a fashion model for Rodarte. In reality, we’ve gotten pretty close. Alicia Silverstone stars in Rodarte’s Fall 2021 collection, which debuted on Wednesday. You better believe we’re totally buggin’.

The fashion from Clueless has cemented the film’s cult status. Last year, in honor of the film’s 25th anniversary, Silverstone spoke to Vogue about the iconic yellow plaid skirt suit — striking a similar resemblance to Rodarte’s pastel pink jacket and dress with black trim and pearl buttons — in the movie.

“As I was putting clothes on I would think ‘Ooh that's a really cute outfit’… But I also knew none of them made sense in the real world,” she said. “So what happened was I wore all these things and by the end of the shoot I felt very attached to them and thought I'd wear them in real life. Remember all I had were jeans and a green t-shirt, so I thought these clothes were gonna change my life! Once I got home with all the things I just couldn't even figure out what to do with them because I wasn't interested again. I looked at them like ‘Who would wear these clothes?’”

Check out photos of Silverstone in the Rodarte Fall 2021 collection, below.