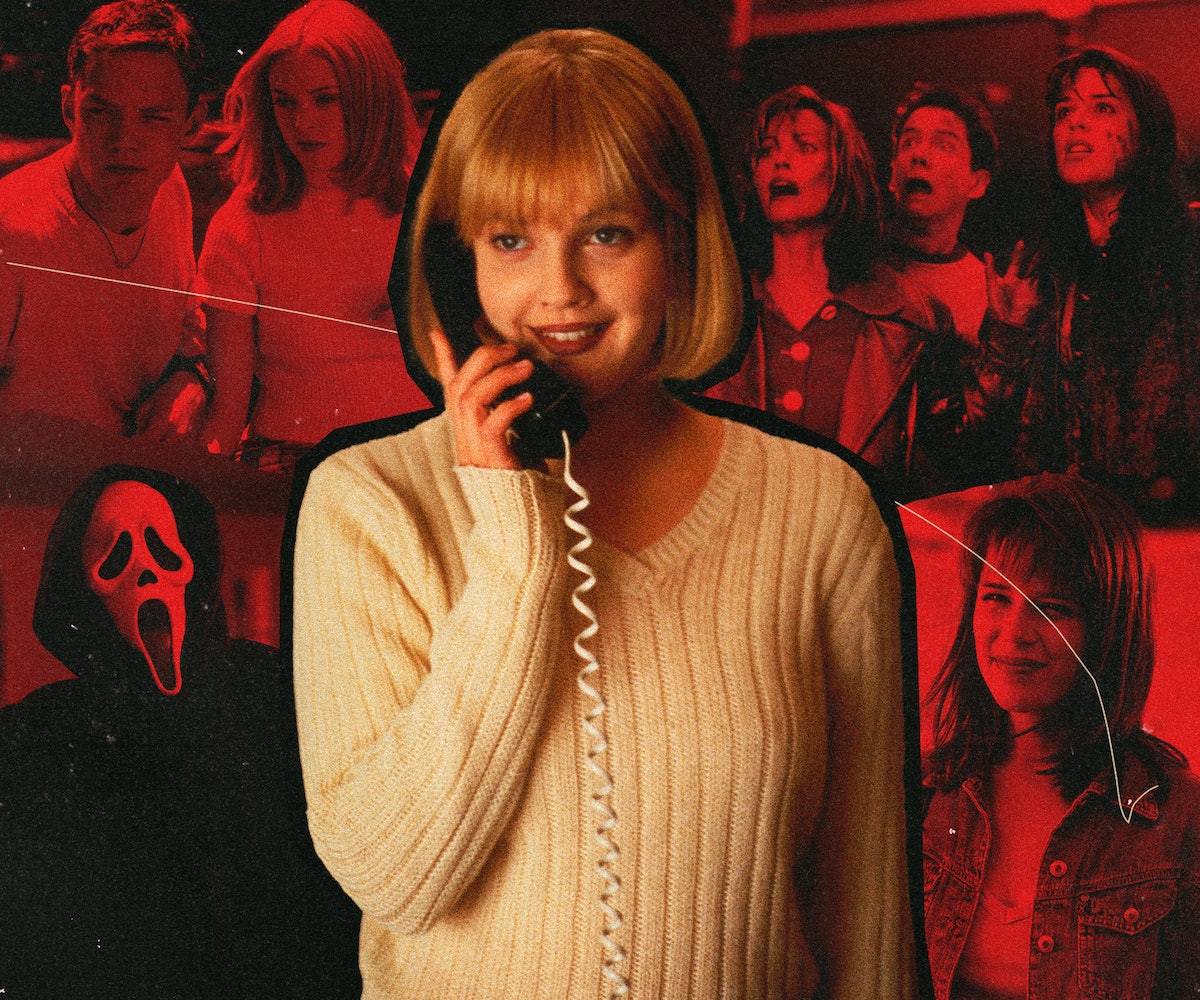 When Scream came out in 1996, it brought slasher movies back to life while simultaneously changing everything we knew about the horror genre. The movie was praised by critics and earned $173 million worldwide, inspiring numerous copycat films and spawning an entire franchise, including a fifth installment, which is coming out in 2022. Twenty-five years later, Scream still holds up, thanks to the genius of director Wes Craven, Kevin Williamson’s witty dialogue, and a talented cast that starred Drew Barrymore, Neve Campbell, Rose McGowan, Skeet Ulrich, and more.

And then there were the looks. While Scream’s outfits might not be as fashion-forward as other beloved movies of the era, like Clueless or The Craft, the clothing has a relatable appeal that has endured the test of time. That was the only thing that Craven asked of costume designer Cynthia Bergstrom, who is also known for her work on the TV series Buffy the Vampire Slayer. “The only direction that he gave me was that he wanted the costumes to be timeless,” she tells NYLON during an interview on Zoom. “He said, ‘Cynthia, you never know, people may be watching this film 25 years from now, they may not, but I’d love for their costumes to not be too on-trend.” This was great for Bergstrom, who ended up creating memorable outfits that hold up just as well as the movie does, decades later.

Ahead, Bergstrom shares all of the details surrounding eight fashion facts and moments from Scream that might inspire you just in time for Halloween or beyond.

The Overall Costume Palette Was Inspired By Another Scream.

Originally supposed to be called Scary Movie (which would later be used for the Wayans Brothers’ parody franchise), the film’s title was changed and named after Michael and Janet Jackson’s 1995 hit duet, “Scream.” However, the palette for the costume design was inspired by another Scream — the famous painting by Norwegian artist Edvard Munch. “That's where I got a lot of the bright chartreuses, oranges, yellows, and reds,” says Bergstrom. This is particularly evident in the Versace chartreuse suit that Gale Weathers (Courtney Cox) wears in one scene. (Gale had another Versace suit, in orange, that didn’t make the final cut.)

Casey Becker’s Look Was Meant To Be Relatable.

One of the most popular Scream-inspired Halloween costumes, aside from Ghostface, is the simple beige sweater that the first victim, Casey Becker (Drew Barrymore), wears in the iconic opening scene. Bergstrom had already worked with Barrymore several years prior on a movie called No Place to Hide, in which Barrymore was required to wear an “outlandish costume that was so over the top,” and so she asked Bergstrom to dress her in something that was opposite of that for Scream. “We wanted to empathize with her immediately,” says Bergstrom of Barrymore’s doomed character. “This was the first time where the star of the show was killed in the first half-hour, so that was really sort of new and innovative, but we didn’t want an outfit that was going to scream, ‘I’m a cheerleader. I’m a popular girl,’” she adds. “I wanted it very basic, something to wear when she’s at home making popcorn, and her boyfriend’s coming over. So, comfortable and casual.”

Bergstrom decided on soft twill lavender pants, and a beige J.Crew sweater that was perfect for hiding pads and squibs for fake blood. “It would be so much fun to get together with some of these brands [that were used] and do a commemorative T-shirt or the J.Crew sweater — J.Crew could sell so many of those sweaters,” says Bergstrom. Are you listening, J.Crew?

Sidney’s Casual Clothing Was Kind Of A Red Herring.

Neve Campbell played Sidney Prescott, the movie’s been-through-hell heroine. Much like Casey, her final-girl style was casual and relatable compared to some of the other characters, but that was partly to throw off the audience into thinking she was a potential suspect. “Her costume definitely evolved. If you look at the beginning of the movie, it’s like, what is she wearing? Is she a tomboy? What’s going on with her outfit? And that was partly because we wanted to make sure that you couldn’t tell if Ghostface was her or not,” explains Bergstrom. “So her shoes were a little chunkier, her jeans were a little more boy-cut, and the short-sleeve blue T-shirt and baggy gray sweaters. It was almost like she was just sort of hiding herself. There was a sense of shame, there’s sadness, but there’s also this need to sort of explore her sexuality.” The look was classic and simple and something that you could wear today, which was in line with Craven’s “timeless” request. “It wasn't Clueless. These weren’t trendsetters at all, except for maybe Tatum or Gale,” adds Bergstrom.

In contrast to Sidney’s casual outfits, her BFF Tatum (played by Rose McGowan) was more trendy with tight sweaters, patterned skirts, and a zebra-print purse. However, McGowan wanted to go even further with the character’s clothing. “Rose had a definite idea of how she wanted Tatum to look and dress, and I was trying to pull back a little bit from where she wanted to go with the character. It was definitely more ‘LA’ and not quite what Wes had wanted,” says Bergstrom. They went out shopping together with Bergstrom’s assistant and ended up coming to a “nice compromise” on pieces, like the white Doc Marten boots Tatum wears.

Tatum’s “10” Jersey May Or May Not Be A Reference To Johnny Depp.

Scream has many horror movie references, especially with regard to Craven’s own films, including Nightmare on Elm Street (Craven made a cameo as a janitor at the school in a familiar-looking red-striped sweater and fedora hat). Fans have pointed out that the gray, cropped No. “10” jersey Tatum dons in one scene could be a reference to the “10” jersey that Johnny Depp wears in Nightmare on Elm Street, which was also his film debut. However, the details surrounding that particular costume choice are a mystery.

“It was the day of shooting and I got a call from my crew saying, ‘Rose really wants to wear this and Wes likes it. Is it OK?’ I said, ‘Well, show me a picture,’ and I was like, ‘Oh my God, I love it.’ It’s fabulous. And it was the red pants and the silver cropped ‘10’ jersey,” recalls Bergstrom. “It might have been on purpose from her, and Wes went with it, but I don’t actually know if Rose did that as an homage to Johnny.” Bergstrom says that “we have to know for sure that Wes knew” the shirt would be similar to Depp’s, even though there were differences in the colors — his was white with blue and red arm stripes, hers was silver with charcoal arm stripes. “I wish I could say I was responsible,” laughs Bergstrom, “but it was Rose.”

Courtney Cox Has A Costume Connection With Another Friend.

Courtney Cox, as the tenacious reporter Gale Weathers, is a Scream style icon of her own in the aforementioned chartreuse Versace suit, as well as the red Moschino jacket with white buttons she wears during the film’s climax. If that Moschino jacket looks familiar, you might have seen the same one on her Friends co-star, Lisa Kudrow, during a scene in Romy & Michele’s High School Reunion, which had its costumes designed by Mona May, who also did Clueless. So, was there some sort of Sisterhood of Traveling Pants-esque situation with that jacket? “It was funny because Mona and I were at the same time at [Neiman Marcus] in Beverly Hills, and we looked at that Moschino and we both went for it,” says Bergstrom. “She put the jacket with a different skirt, and I bought it as a suit and kept it together. But it was really funny when we were shopping. I’d look over and see what she had in her arms and she’d look and see what I had. It was so much fun.”

Skeet Ulrich’s Billy Was Supposed To Look More Like A Jock.

We only get to see Casey Becker’s ill-fated boyfriend, Steve, for a brief moment in the opening scene, and instantly know that he’s a jock from his letterman jacket (aside from when Casey threatens the killer that “he’s big, and he plays football and he’ll kick the sh*t out of you!”). Bergstrom says that she had more of that look in mind for Billy, that is, until Skeet Ulrich was cast.

“I was like, ‘OK, he’s not really all-American looking. What am I going to do here?’ So I just kept him sort of hunky and classic.” According to Bergstrom, Ulrich really wanted to talk about wardrobe and his hair, but she kept things simple. “I said, ‘Let’s put you in a pair of great-fitting jeans, boots, and T-shirts. I think that’s the way to go with you.’ Let’s play up some romantic blues and do some whites so we could show blood, but it was really easy. It wasn’t complicated at all.”

Bergstrom says that Ulrich naturally makes everything look good, and she could “put a Gunne Sax [dress] on him” and he’d make it look fantastic. But it was the white shirt that he wore during the big reveal that ended up being the most difficult to source. “I will say that we tried on a lot of T-shirts, and one T-shirt is not the same as another T-shirt. It took a lot of different brands to get the right fit and the right look,” she says. (The shirt was probably either from Calvin Klein or Kenneth Cole, according to Bergstrom.)

The Ghostface killer wears a ghostly white mask and a black hooded robe, but Craven originally wanted the robe to be white. “We put a friend of mine, who’s a big guy, about 6-foot-2, in the white costume, and he basically looked like a giant Casper the Ghost. And Wes still liked it. And Marianne [Maddalena, the producer] and I are just kind of like looking at each other going, ‘How can we get him away from the white?’ It wasn’t until a couple of weeks before we started shooting that we really nailed the costume.”

While they were doing a location scout in Hillsborough, California, the movie’s director of photography spotted the material for the would-be robe in a store next door, noticing how the sunlight hit the black metallic lurex fabric perfectly. “He said, ‘I can light it in a way where we get that spark and that glint, almost like the glint of the light hitting a knife,’ and that was it, Wes was sold,” says Bergstrom. After the movie came out, Bergstrom would soon realize how popular the killer’s look would become. “I remember going to a Halloween party, and there were all these Ghostfaces coming towards me, and I was like, ‘Wow, if only I’d gotten a piece of that action,’ the sales,” she laughs.