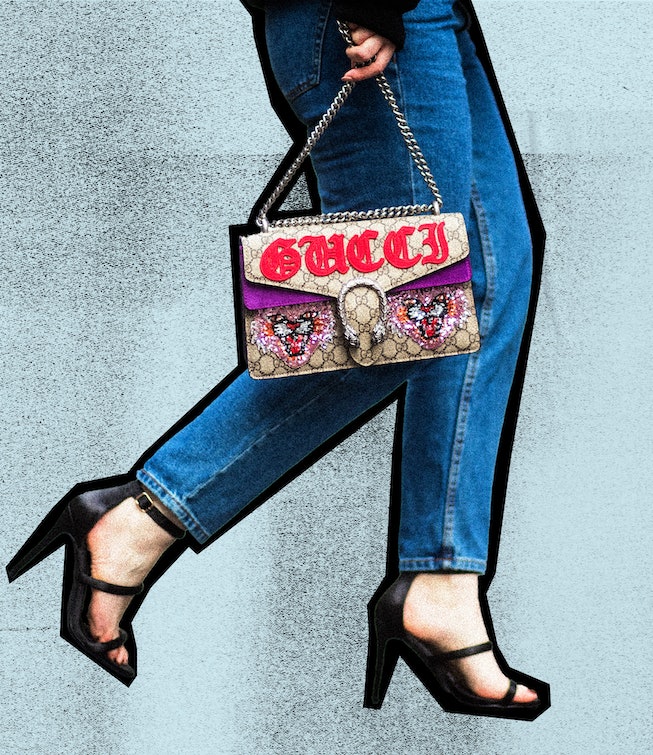 Every season, I get an itch to add to my already expansive handbag collection. Rather than stalk the latest styles trending on social media, I take a more nostalgic approach by indulging my younger self. I’ve started gravitating towards the secondhand designer bags that made my eyes sparkle back in the day and are on the precipice of a major 2022 comeback. And surprisingly (to absolutely no one), they’re all in line with the industry’s current penchant for all things Y2K fashion.

According to Rebag’s annual Clair report for 2021, a comprehensive study the luxury retailer uses to track the latest trends on the market, traffic has already begun to pick up on popular styles from the mid-2000s — but not the ones that you would necessarily expect. For starters, Balenciaga’s “City” bag was clocked by influencers a few months ago as one to watch, when the house’s creative director, Demna, revived the buzzy style. Meanwhile, Prada’s “Vitello Daino” line of satchels are on track to be the next big reissue, and its new “Re-Edition 1995” tote, a structured style with double top handles and a briefcase-like silhouette, transcends seasons and trends. But these heritage handbag brands aren’t the only ones worth keeping an eye on.

“We’ve seen a great push by Bottega [Veneta],” Rebag founder and CEO Charles Gorra explains in relation to the secondhand marketplace’s annual report. “They’ve been on a run for the last few years, pretty much ever since Daniel Lee came in, and we’re seeing a massive impact on the resale side of things. Gorra adds that the trade-in value for the luxury brand is now at 50%, a spike from the 28% mark just two years ago. For those determined to get the most bang for their buck in the long run, consider investing in Bottega Veneta’s “Intrecciato” hobo bag, which is ranked with almost a 90% trade-in value.

And of course, because everything eventually comes back into style, it’s only a matter of time before any one of these bags are sitting at the top of the resale market charts. But by then, it’s almost always too late. To keep you ahead of the masses, below is a well-curated selection of under-the-radar designer handbag styles worth bookmarking (and shopping secondhand) for later.

Those who keep a close eye on the latest bag revivals might argue that the studded “City” tote is not actually considered under-the-radar but to an untrained eye it’s still just on the cusp of its peak. A favorite amongst style icons Mary-Kate and Ashley Olsen (and a slew of other celebrities) during their early-aughts era, the slightly slouchy, moto-style design, which is proven to only get better with age, has been reimagined over the years in countless materials, colorways, and sizes to appeal to just about everyone. Searches for the style increased by 475% at the top of the year, which according to Rebag, can be attributed to the ongoing Y2K fashion trend popularized by TikTok, as well as reboots like And Just Like That and Gossip Girl, which often feature the sought-after handbag.

Gucci creative director Alessandro Michele loves to put a modern spin on classics from the archives. But on a list of the luminary’s own attributions to the Italian fashion house, the instantly-recognizable double-tiger head hardware of its Dionysus bag is somewhere close to the top. A play on the Gucci’s iconic “horsebit” details, the style made its debut in 2015 and earned its name from the ancient Greek God of wine and all the things that go along with living lavishly. Only seven years after its inception, the accent is considered one of “Gucci’s Beloved” — a selection of core collection pieces that’s linked to the brand’s storied past. Plus, in the metaverse, the specific bag style is already a hot commodity. On Roblox, Gucci released the item as a limited-edition bag style within the game (costing about $6 worth in Robux), which was then resold for $4,115 (350,000 Robux), a total that costs more than the actual, physical bag’s price tag.

Early-aughts fashion trends are at an all-time high, which means the uptick in styles from the mid- to late-2000s are not long behind. Those looking to stay ahead of the wave (and major markups) should consider the Old Céline’s once-beloved “Phantom” tote. The Phoebe Philo design first made its debut in 2011, instantly skyrocketing to popularity as paparazzi-pic fixture, worn by celebrities and models, like Kourtney Kardashian, Rosie Huntington-Whitely, and Alessandra Ambrosia, to name a few. Only available in medium and large sizes, the structured piece is certainly bigger than the handbag styles currently trending on the market, but it has all the makings of your next, not-so- new “It” bag.

Daniel Lee’s three-year reign as creative director at Bottega Veneta may have come to an end but the luxury brand’s collection of buzzy accessories is still going strong. In fact, as proven by the recent rise of the brand’s woven “Teen Jodie” bag, any style — past or present — that features the iconic “Intrecciato” leather-weaving technique is a certified hit. Investing in one of Bottega Veneta’s vintage hobo styles allows you to be on-trend, while also snagging a new addition for your collection of forever-pieces.

Just one glance at the latest runway collections will tell you everything you need to know about the direction in which handbag trends are headed. Thanks to the likes of Peter Do and The Row, among others, the sling-style purse is having a moment. A hybrid between a classic hobo and a shoulder bag, the slouchy silhouette is nothing new. Louis Vuitton’s “Croissant” design entered the scene long before the “hammock” trend took off and is now worth having on your radar in terms of secondhand and vintage handbag styles to invest in. According to Gorra, the brand itself currently has an 80% average value retention, meaning you’re bound to get your money’s worth should you decide you want to resell it later down the line.

At this point in the trend cycle, the baguette-style bag has pretty much run its course. But Dior’s buckle-detail shoulder version is a worthy exception. Slightly larger in size than more traditional takes, its curved body has a banana-like design that still feels relevant today. Available on most luxury resale sites for under $1,500, the Dior “Street Chic” bag is a great alternative for the SATC-approved Saddle Bag that continues to skyrocket in price. (Take it from someone who was eyeing the aforementioned on eBay before its reissue, it’s best to get ahead of the wave.)

Leave it to Miuccia Prada to take the Italian fashion house’s timeless tote and make it feel fresh and new for the present day. A tried-and-true classic, the brand created an entire re-edition line of its 1995 tote bag, made popular by ultimate-muse-of-the-era Carolyn Bessette Kennedy. But because the now sold-out reissue is an updated take on a vintage silhouette, there’s even more reason to buy a pre-loved style or another secondhand version from the brand that looks like it instead.

Millennials would agree that at the peak of mid-2000s fashion is some iteration of Stella McCartney’s “Falabella” tote. First launched near the end of 2009, the bag is instantly recognized by its flap-over design and chain-link hardware trim. But what separates the core design from the rest is what it stands for: The handbag remains one of the first-of-its-kind in terms of sustainability, making a strong case for non-leather luxury brands, which seemed nearly impossible at the time. Today, it remains one of the brand’s most memorable pieces and is set to have a comeback soon in a major way.

A compact alternative to Fendi’s signature baguette, the “Oyster” bag is a smaller shoulder style with a rounded body that, when properly packed, resembles a pouch pocket. While the more common iterations on the market include logo-printed canvas, a few of your favorite retail sites, including Fashionphile, also have the bag on offer in leather and beaded fringe, which makes it a great option for a night out. With so many versions to choose from — think fabric, embellishments and everything in between — you’re almost guaranteed to find a unique style that you won’t find on anyone else.

This article was originally published on March 16, 2022