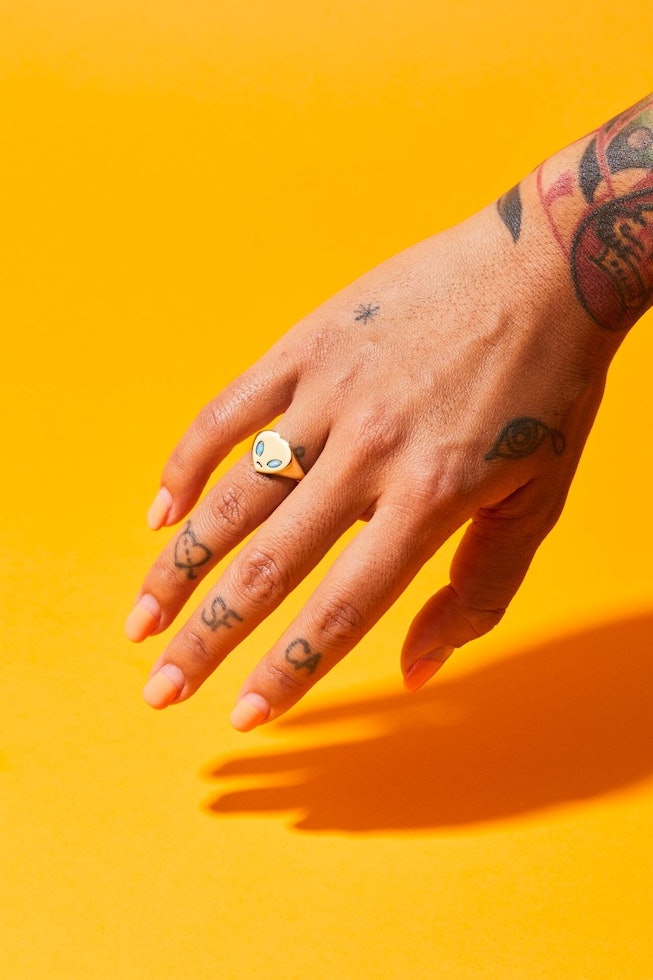 It started with an alien ring for Sisterfriend, a Philadelphia-based brand that offers fine jewelry in playful styles. (Hence, the Tiny Alien Ring that you can get in 10-karat gold or sterling silver with eyes made of opal, sapphire, or pearl.) Friends and now co-founders Lisa Maita and Kelli Mercado-Waldron originally created the design upon the request of Mercado-Waldron, a buyer-turned-stylist, who asked Maita — who’s climbed the ranks of the jewelry industry in the city’s Jewelers' Row since she was 16 years old — to create a ring in the shape of an alien for her.

“It would be really cool if we made a couple of these rings, just because of the initial investment in the mold and design,” recalls Mercado-Waldron. “And that kind of started the fire — this idea of making something that was really cute, but also of fine quality that I could have forever.”

When people think of jewelry heirlooms, the styles are obvious: an engagement or a wedding ring; a pair of diamond earrings; or a designer watch. Essentially, the pieces are timeless and classic, but what makes, say, persimmon-inspired studs or a pendant resembling sunglasses (made from rose gold and pink topaz stones) any less meaningful or valuable? Plus, it’s that delightful surprise factor that really defines a Sisterfriend piece.

“I've been in the jewelry business for so long, making things that I literally have never seen before. My boss, who's been working since the '60s, and even other people since the '70s, are like, ‘What? I can't even believe that you're doing this,’” says Maita. “We feel like it's not something that a lot of people have seen or even know what to think initially, and that's how we like it. The shock is really wonderful, and people are like, ‘Why?’ And it's just, because we can, and here we go.”

Mercado-Waldron and Maita first met through mutual friends and bonded over their Filipino heritage and shared love for similar aesthetics — all things tiny, cute, and kawaii — which happen to be a large source of inspiration for their designs. There’s the Mah Jong Tile Charm and Dice Cage Charm, complete with its own three mini dice, that pay homage to their families playing games and the Philippines’s gambling culture. Pendants shaped like mango slices and Spam are some of their favorite snacks, while a nameplate is adorned with the Filipino greeting “Mabuhay.”

Nostalgia also plays a large role in Sisterfriend’s jewelry, tapping into childhood memories and Japan’s beloved “miniaturism” toys (think dollhouse-sized, well, everything). “Playmobil was, I would say, for me, the start of my mini journey, because there's a little parrot in my play set, and then also little cups and a little pitcher in it. It really set me off,” says Maita. “Being able to pretend to pour something that was so teeny tiny, and between my pointer finger and my thumb, it was just so crazy.” (Sisterfriend offers its own pitcher pendant complete with a briolette diamond as a drop of water, as well as an ice tray and rice paddle.)

For the brand’s latest drop, the duo are offering pieces centered around food, including a collection of limited-edition charms in the shape of a dumpling, tinned fish, a peanut, a platter of sushi, a fortune cookie, an egg in a skillet, and more. “It all harks back to that sweet, tiny, precious thing,” adds Mercado-Waldron. “But it was also important for us for it to be something that you could hold on to forever.”

Sisterfriend has been around since February 2020, just ahead of when the novel coronavirus was declared a global pandemic. They had big plans for a launch party, like renting out an entire floor of a banquet hall in Chinatown. “We definitely started a business at a really tricky time. Gold was at an all-time high, COVID hit, and everybody was losing their jobs,” says Mercado-Waldron. “It was super scary. We had been planning in the background for such a long time, and when we finally launched, it kind of was a whirlwind of things that happened immediately after that. But we just rolled with the punches and continued to do what we needed to do.”

But as the world slowly starts to open up again, Sisterfriend can finally bring their lively presence offline. In early May, Mercado-Waldron and Maita hosted a pop-up at shop and event space Art In The Age in Philadelphia’s Old City. It was a “pretty major thing” for them, especially since it was one of the first customer-facing events for the brand. In the future, the two hope that they can open up a place of their own.

“I know Lisa and I dream about one day having a brick-and-mortar. I came from a retail environment, and I actually really love working in stores, and love seeing customers, and I know that it's kind of a dream for us to be able to have a space to work and create and have customers come in,” says Mercado-Waldron.

“We were in Chinatown the other day, and I pointed at an open storefront, and I was like, ‘Kelli, that's our place, that sun-soaked window right there,’” remembers Maita. “But seriously, the place that used to be there had giant plushies of Hello Kitty and Rilakkuma, so what if we just imitated that, and then all of the plushies are wearing our jewelry?”