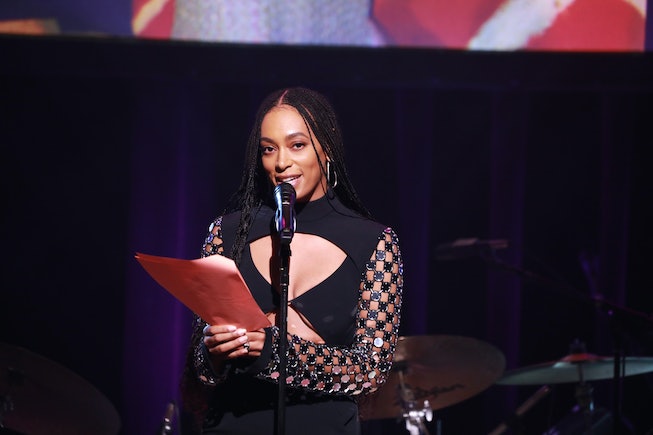 Graduation ceremonies across the country have been canceled due to the COVID-19 crisis, leaving many high school and college seniors without any pomp and circumstance to send them off to the next chapter of their lives. The seniors at Parsons' School of Fashion in New York are a little more lucky, though, with the school partnering with Solange Knowles and Saint Heron on a virtual festival called Here and Now.

"In these past weeks, so much of the focus has been on what has been taken away or lost. Right now feels like a moment to come together around that," said Jason Kass, interim dean of Fashion at the Parsons School of Design. "We're not seeing this as a consolation, but rather a new way of celebrating creativity."

The full details of the festival haven't been released, but former Saint Heron collaborator Jacolby Satterwhite has been announced to create a 3D installation to host more than 300 final projects from students. The festival will happen over the next few months and also include online lectures, special performances, films screenings, design workshops, and mentorship sessions.

"When we realized that we weren't going to be able to hold our festival in the way we typically would, we started to brainstorm around what we could do, not just for the students, but also for the fashion industry and the creative community," said Kass. "Solange and the team at Saint Heron instantly came to mind."

Solange was honored by the school in 2018 at the 70th Parsons Benefit, where the school raised $2.26 million.

Solange isn't the only Knowles sister doing her part to help graduating seniors this year. Beyoncé was announced as a headliner for YouTube's Dear Class of 2020 livestream event on June 6, alongside Barack Obama, Michelle Obama, Lady Gaga, Taylor Swift, and more.