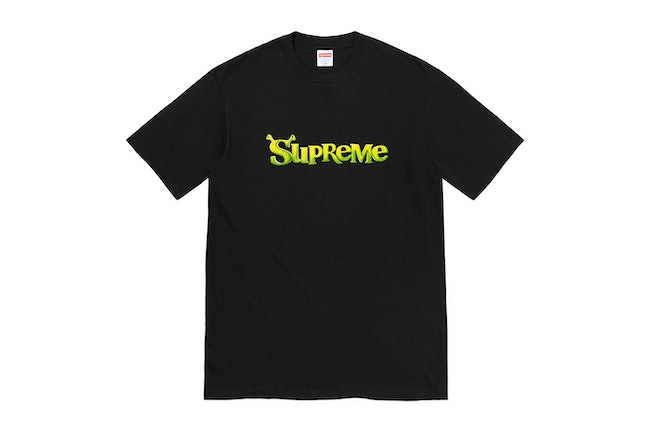 Supreme released its Fall 2021 lookbook on Monday, revealing upcoming collaborations, coveted accessories, and an homage to the beloved movie Shrek. The brand’s signature logo goes green and features those oh-so familiar ogre ears, which can be found on a black tee, embroidered on beanies, and across three skate decks.

The early-2000s film franchise recently celebrated its 20th anniversary in May, and over the past two decades, Shrek has turned into a pop culture icon, garnering a massive fandom and often going viral on TikTok.

And while everyone’s favorite ogre is a certified hypebeast now, thanks to Supreme, this isn’t the first time the character has ventured into streetwear. Montreal-based skate brand Dime released a similar design for its Fall 2019 collection, including an almost-identical logo embellished on a black tee and fitted caps, which have the phrase “Somebody” on the back, a reference to Smash Mouth’s hit single “All Star” that plays during the film’s opening scene.

Still, Supreme fans are eagerly waiting for the upcoming collaboration to drop and it's only a matter of time before the memes roll in. Supreme’s Fall 2021 collection will make its weekly releases, with the first one out on Thursday, Aug. 19. In the meantime, you can view the Shrek-inspired pieces, below.