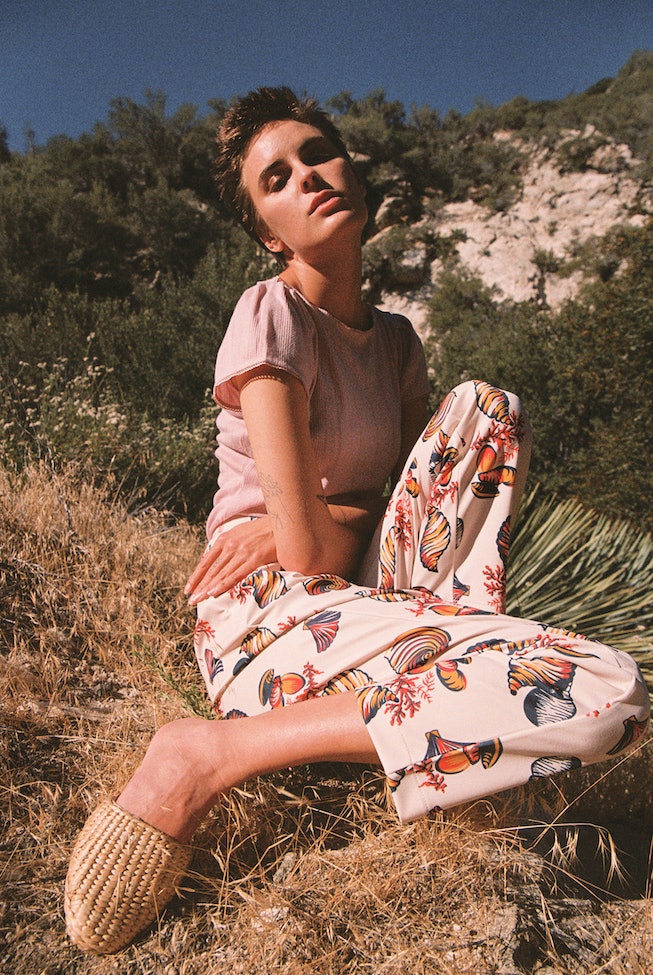 Like most 20-year-olds, Tallulah Willis found herself trying to figure out what "her thing" was. After getting sober six years ago, she felt like she hit the restart button, and wanted to finally pursue her creative passion — potentially turning it into a full-time career. But what exactly would that be?

"I knew intrinsically that I wanted to create. I loved this idea of something that wasn't there before you, that was physical, that you could feel," Willis tells NYLON over the phone from her home in Los Angeles. "I kind of dabbled around in visual arts a little bit, and then took a stab at some pottery. There was just this, 'What am I doing? I'm trying a few different things.'"

Through all of this, fashion was always there for Willis, whether she was working at the Helmut Lang store on Melrose, a vintage store on the weekends, or alongside celebrity stylists. "For some reason, I kept pushing away from [fashion]," she says. "I think that there was a fear. I would speak to some people about my interest in it, but was always met with a warning label: 'It's a lot of resources. It's a lot of energy.'"

Cut to 2018, when Willis was approached to do a capsule collection with Juicy Couture, giving her a full glimpse into the design process. "I loved it," she recalls. "It brought me so much joy." Unfortunately, the collaboration fell through, but that didn't stop Willis. She had finally found "her thing."

"Clothes and fashion have been a real present factor through every stage of my life," says Willis. "It's been a slow burn, probably since eighth grade, and I was sort of blind to the fact that it was exactly 'the thing.'"

At the start of 2020, she soft-launched Wyllis with a small collection of cozy sweatshirts featuring her own embroidered doodles and phrases that advocated for mental health. It tied together wellness and fashion in a way that many brands are still trying to achieve in order to create a sense of community among their followers. Meanwhile, Willis teamed up with Rachael Finley, a brand manager who runs Hot Lava and Teenage, and together, they aimed to turn Wyllis into a full-on ready-to-wear brand.

"Rachael took this babbling, raw idea that I had of how I wanted to structure this line and we just hit the ground running," explains Willis. "We started designing and pulling pieces and before I knew it, the samples arrived and here we are."

Wednesday marks Wyllis' official debut for Summer 2020, a line that's heavily inspired by vintage fashion, which Willis says has been part of her life forever. Her mom (Demi Moore) started collecting vintage clothing as a teenager and keeps everything in "a massive, massive warehouse" in Sun Valley, Idaho, where Willis and her two sisters grew up. When her family moved to L.A., Willis remembers having sleepovers with friends and then waking up in the early morning to go to the Rose Bowl flea market to "rifle through racks and racks of vintage clothing."

"That was the standout of cool," says Willis. "It wasn't about brand names. It wasn't about luxury items. The coolest thing was what kind of vintage dress you could get. Although, I will admit it was a bit of sacrilege because we always chopped them off. In eighth grade, you just want everything to be a mini-dress."

Willis is particularly drawn to silhouettes from the 1940s — a strong shoulder pad with a fitted waist; printed rayon and crepe fabrics — and it shows in some of her first pieces for the brand, like a powder-blue, stretch linen dress with a paisley print that’s based on a piece that Moore has had since she was 19. The camp shirts, which come in Hawaiian-inspired butterfly, floral, and leaf prints, are an homage to her dad (Bruce Willis), who's an avid collector of men's gabardine and rayon button-downs from the '40 and '50s. The rest of the collection, which is priced up to $275 and sized up to 3X, is a mix of statement apparel and everyday staples, along with two footwear styles based on 1960s party shoes and matching kids' pieces.

Much like the rest of the fashion industry, the global pandemic caused some delays for Wyllis' launch, which was originally slated for March until Willis decided to push it back. "I wanted to be aware and respectful of what was happening to the world. I didn't feel it was appropriate to be throwing promotional imagery into the ether," she says. "I would love Wyllis to be synonymous with safety, comfort, inclusivity, and a feeling of self-esteem and self-care. I want every decision we make as a brand to reflect that."

Despite the four-month delay, there's no slowing down for Wyllis now — the brand already has at least five seasons of upcoming collections on deck. "I keep saying it's the tip of the iceberg. It's just a taste," says Willis. "And I'm just so wanting people to stick with us and watch what we can do." Plus, mental health advocacy remains at the brand's core. For the next month, Wyllis will donate 10% of the proceeds from its debut collection to The Loveland Foundation, an organization that provides free therapy and healing to Black women and girls.

And while Willis has already solidified her footing as a fashion designer, what's most important to her is that the clothes make you feel good. Right before our conversation, Willis recalls seeing a few Instagram Stories from a woman who was wearing the brand. "She was talking about how these are the clothes she puts on when she doesn't feel great, and they make her feel really safe," says Willis. "I wrote her back and said, 'That's the best thing I could’ve asked for.'"

"I've grown up in the spotlight. I've had the privilege and the access to know what it feels like to have people around you, and that kind of energy on you," she adds. "And so as a designer and a brand owner, I don't seek that out for myself. My success can be measured in the amount of people that feel comfortable in what I've created."