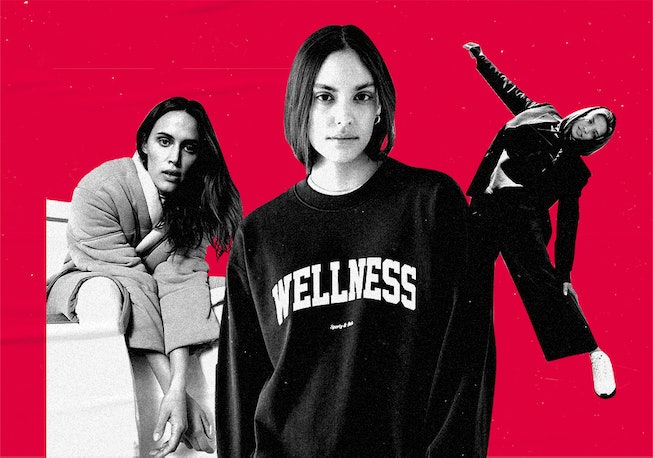 A pair of leggings may have simply symbolized a love of yoga back in the day, but now people can put all sorts of wellness-focused practices on full sartorial display, from mental health awareness to drinking more water. Whether it's a pair of cozy sweatpants or a logo tote, fashion brands are starting to turn self-care — a concept that hit mainstream interest in 2016 and is now a $10-billion industry — into an aesthetic.

"A few years ago, wellness was more linked to fitness or food, and then we saw it trickle to skin care and other areas, as well," says Melissa Hago, the vice president and director of beauty at trend forecasting company Fashion Snoops. "We're seeing it have a 360-degree point of view, where people are realizing that it's not just what you eat but what you're wearing, what your air is like at home, or even what your couch's fabric is made of. It's definitely evolved within the beauty and food space to everything else."

Melissa Moylan, Fashion Snoop's vice president and creative head for women's wear, points out that this shift stems from women's brands that already had health and fitness as an existing core brand value. "Many of them started out selling activewear and offering things like yoga classes, and what they did is so unique and so relevant to today because we're seeing more people building community and fluidity, so that it's not just about the product," she adds.

These days, a brand will not succeed unless it's driven by a purpose. (Think Patagonia's mission to save the environment, Aerie's dedication to body positivity, and TOMS' "One for One" concept.) Combining self-care with fashion seems like a winning combination, but, as Moylan notes, it can only go so far.

"Wellness holds such a great force today," she says. "It could and should be perceived from all aspects from the onset of design — how we make them, how we're caring for them, even how we’re disposing of them." Until then, read on to see how self-care has influenced our wardrobe choices, broken down by five different fashion aesthetics, below.

The homebody economy has influenced our affinity towards all things cozy, from shearling outerwear and cashmere socks to sweatsuits and anything else that embodies hygge. But it's the Ugg boot that we should credit for cozycore's origins, with its soft sheepskin lining and flexible outsoles. "When people find comfortable things, they don't evolve away from them," recalls Iva Pawling, co-founder and CEO of Richer Poorer, on her first memories of Ugg boots from her college days. "They become staples in your wardrobe. That was something that always stuck with me."

Though Richer Poorer initially launched as a men's sock line in 2010, the brand has pivoted nearly 10 years later to deliver "confidence in comfort," starting with a women's bralette in 2016 and a creative direction overhaul at the start of 2020, along with a full apparel line of sweats, underwear, and T-shirts for spring. Over the course of three weeks in March — just as stay-at-home orders were enforced across the country — the brand's tailored sweatsuits, which are made from a soft fleece and boast deep, lined pockets, were sold three times more than what Richer Poorer had sold all of 2019.

"We were positioned at the right place at the wrong time for the world," says Pawling. "We didn't have to do any brand changes in order to accommodate this new at-home consumer. We were already there."

A new breed of fashion brands are blending self-care and downtime, creating garments that dress people up to do, well, nothing. Offhours' quilted robe, also known as the Homecoat, is the hero piece for this "inactivewear" movement, an extension of the homebody economy. But now that our time spent indoors isn't exactly considered leisure (and rather a government-sanctioned order), our wardrobes have morphed into something that's not only comfortable but presentable, too. Richer Poorer has plans to expand into loungewear this fall with its own robe coats, as well as sleep sets with built-in underwear and bras, that could be worn both inside and outside.

California-based brand Lunya, for example, offers modern sleepwear — silk button-downs and wide-leg pants; striped linen shirts and matching shorts — that could be suitable for bed and a Zoom meeting, too. Moylan sees this brand as part of fashion's "restore" trend that's on the rise. "Millennials and Gen Z-ers form this anxious generation perspective, so they need to feel rested. They need to feel comforted," she explains. "There is a huge spike in popularity in loungewear right now so we're looking for materials that have these restorative benefits."

With millennials and Gen Z characterized as "the anxious generation," fashion brands are helping to normalize mental health in order to better connect with them. Madhappy, which launched in 2017, rooted its streetwear in optimism and mental health awareness. (Most of the brand's coveted hoodies and crewnecks, priced between $118 and $195, are currently sold out on its website.) This purpose-driven approach has even caught the eye of luxury conglomerate LVMH, which invested in Madhappy last year.

Designer Tallulah Willis sees her brand Wyllis serving a bigger purpose: "Fundamentally, fashion is self-expression and can be a tool for honing self-identity. By wearing something that recognizes a part of yourself that historically has been stigmatized, it can, hopefully, give the wearer some power back," she tells NYLON.

Wyllis launched in 2020 with a debut collection of vintage-inspired sweatshirts featuring imagery that "gently and compassionately spread truths" from Willis' own experience while navigating her own mental health. One piece includes the handwritten phrase "I'm uncomfortable in my own skin" while another is emblazoned with "YEAH I’M FINE" made up of small sad faces — Willis' personal favorite.

While Madhappy and Wyllis are focused on mental health, the brand Peace & Quiet, which launched in June 2019, promotes the self-care act of mindfulness. Co-founders Ashley Daquigan and Christion Lennon took inspiration from their travels to Marfa and Sedona as respite from their busy lives in Los Angeles. "We needed to get away. It was always our thing to visit these peaceful and quiet places," says Daquigan.

Their first product was a logo tee with the graphic "Quiet Environment," and their bestselling product is a crewneck sweatshirt adorned with the word "Natural." On May 27, the brand dropped a new four-piece collection comprised of a tie-dye sweatshirt, tees, a cap, and a tote bag, which quickly sold out. In March, they released a free app of relaxing sounds and at the end of April, the two collaborated with Michelle Siman of Lemon Water, a wellness-focused podcast and Instagram account, on a long-sleeve shirt that says "Inhale" on the front and "Exhale" on the back. "We wanted the shirt to pay a tribute to the importance of breathwork to our mind, body, and spirit," explains Siman. "This also ties back to how I believe wellness should be attainable and accessible. It's a simple wellness practice that doesn't cost any money and often sometimes people forget that."

"A T-shirt is the new advertisement," says Lennon on how wellness and self-care has translated into fashion. "Somebody could be walking down the street and they might see someone wearing a 'Natural' sweatshirt and it's almost like a reminder: 'Maybe I'll eat better today.'"

A brand that fully advertises wellness through fashion is Sporty & Rich, which has evolved since 2016 from a magazine to a clothing collection, all while remaining true to its core concept: "health is wealth." (Though, founder Emily Oberg was recently criticized for her remarks on eating healthy on a budget, to which she issued an online apology.)

"I'm not interested in just having a clothing brand forever," Oberg tells NYLON. "I don't think there's much longevity. That's really why the messaging is rooted in wellness. When you wear it, you're subscribing to this visual identity." Indeed, a scroll through Sporty & Rich's Instagram showcases the brand in wellness-adjacent fit pics — a logo tote packed with fruits and vegetables, an influencer drinking a glass of water in a Sporty & Rich hat, and actress Laura Harrier wearing a crewneck while exercising.

Oberg has long-term plans to build luxury wellness centers, but for now, she's building a base of loyal customers and followers through limited-edition drops and her new Instagram platform Sporty & Rich Wellness Club, which garnered 10K followers within the first week of its launch. This summer, she has plans to open a Sporty & Rich juice bar in Paris.

"My whole life revolves around wellness and health. That’s why it's so organic for me because I'm living everything that I'm preaching. I think that's the best way to do whatever it is that you're doing," says Oberg. "There are a lot more brands in the past two or three months talking about these things, so I think it's good. I just hope people are doing it in a way that's true to themselves and because they really believe in it. Not because it's trendy."