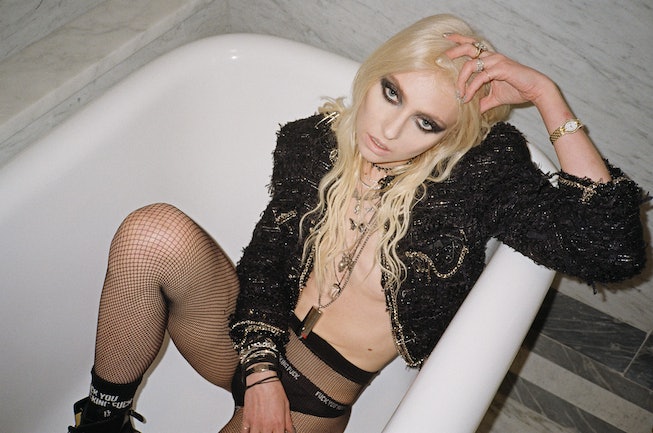 “It” girl brand R13 has a new “It” girl spokesperson — and she’s a pretty perfect fit.

Taylor Momsen is worlds away from her “Gossip Girl” Little J days, having spent more than a decade serving as the lead singer of her band the Pretty Reckless. But that signature grunge-meets-chic style that deemed her a fashion icon all those years ago never wavered, and is on full display in this new campaign.

Shot at the storied Chelsea Hotel, where Momsen’s band had its first shoot, she is pictured in a series of looks that play directly into her signature style: fishnets with flannels, tweed jackets with combat boots, and more.

“What’s always stood out to me with Taylor’s style, and also what’s so critical to R13’s ethos generally, is how well she strikes a balance between conflicting looks and ideas: soft and hard, feminine and masculine, grungy and chic,” Chris Leba, CEO of R13, told CR Fashion Book in an interview accompanying the release of the campaign. “The tension between those conflicting ideas turns a relatively simple outfit, like combat boots and a negligee, into an iconic look and you’d have a hard time finding someone who can evoke that tension as effectively and consistently as Taylor can.”

However, there’s no denying that these entities are a match made in grunge heaven. The model, the collection, the location. As Momsen wrote in an Instagram caption of one of the looks, it’s “Grunge Fashion meets Grunge Music,” something she has been interested in as long as she has been making music.

“I think that, for a lot of musicians, fashion is a big part of the visual expression of their music,” she told CR Fashion Book, adding: “Seeing the White Stripes when I was a kid definitely had an impact on me. The monochromatic coloring of the stage and also them, the red and white aesthetic, gave the whole thing such presence and make me look at it as a whole, opposed to just what I’m wearing.”

She may have been inspired by Jack and Meg White, but she is less comfortable accepting the role of fashion icon herself. One look at this collab — and we beg to differ.

Ahead, more photos from the campaign. Head to R13 to shop.