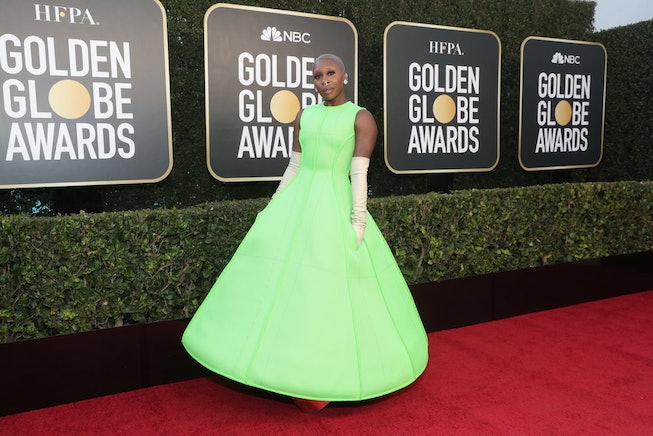 From New York to Los Angeles and everywhere in between, awards season is officially here. On Sunday evening, the 2021 Golden Globes red carpet kicked off the festivities with high-glamour fashion moments. Much like last year, most celebrities are getting dressed and virtually showcasing their hotly anticipated ensembles online.

Elle Fanning, who's nominated for Best Actress in a Television Series Musical or Comedy for her leading role in The Great, wore a royal-inspired gown by Gucci and jewelry from Fred Leighton. "Thank you @alessandro_michele for this glorious dress!" she wrote on Instagram. "I heart @gucci forever!"

Meanwhile, Andra Day, whose The United States vs. Billie Holiday starring role nabbed her a nomination for Best Actress in a Motion Picture Drama, wore a Chanel haute couture look from the French house's Spring 2021 collection. The long, gray silk tulle dress is fully embroidered with a sequin macramé bodice that took more than 1,000 hours to create. The label also dressed its longtime ambassador Margot Robbie in a Spring 2021 look from its ready-to-wear collection, as well as Daisy Edgar-Jones, who's nominated for Best Actress in the Limited Series Normal People, in haute couture, and Shira Haas, a nominee for Best Actress in the Limited Series Unorthodox, in a black, strapless fantasy tweed dress with a sheer silk skirt.

See the best fashion moments from the 2021 Golden Globes, below, and keep checking back for more as we update our list.

Bryce Dallas Howard in Temperley London (secondhand via The RealReal)

This article was originally published on March 1, 2021