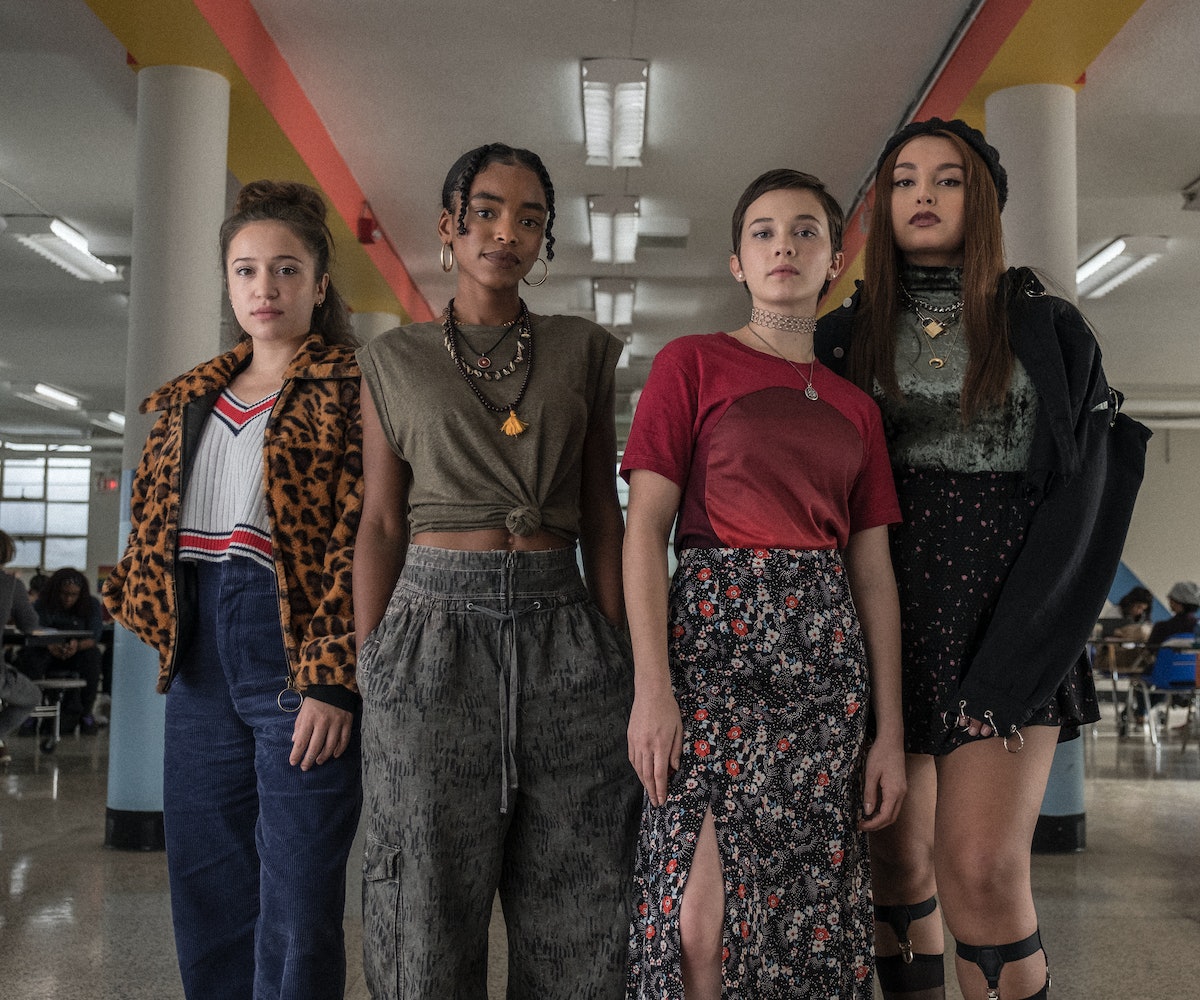 How exactly do you dress the cast of a cult-favorite reboot? According to Avery Plewes, the costume designer behind The Craft: Legacy, the Gen Z remake-meets-sequel to the 1996 spooky classic The Craft, you do something entirely different.

"I don't think there's a way in which we can recreate what was in the original, particularly because the way the girls were dressed in the original is actually quite trendy right now," Plewes tells NYLON. "It just didn't feel right to me, and [director] Zoe [Lister-Jones] and [producer] Natalia [Anderson] felt the same way. We didn't want to reinvent something that was brilliant in that regard."

Instead, Plewes gave the teen witches (played by Cailee Spaeny, Zoey Luna, Gideon Adlon, and Lovie Simone) a very distinct color palette and sartorial theme based on their elements (water, earth, air, and fire, respectively). Lily (Spaeny), for example, wears a lot of blue and pearls, which you'll notice from the very beginning of the movie when she's introduced as the new girl at her high school — and also the missing fourth to the teens' coven.

Plewes also chose a specific crystal for each one, which she gifted the girls at their first fitting and they carried in their costumes while filming. She also made sure to source the movie's wardrobe from businesses where the average teen would likely shop — think high street retailers, like ASOS, Aritzia, and Zara, among others. "It was really important for me that the clothing that we use in the movie is affordable and accessible, so if kids want to go out and buy it, they can," she says.

Of course, a remake wouldn't be complete without a few Easter eggs, and Plewes made sure to include them in the cast's wardrobes, too. Lily wears chokers — a stylish callback to Nancy Downs (Fairuza Balk) from the original film — while Lourdes is often seen in patent leather jackets, which, notes Plewes, "is the most quintessential Craft item."

"When you think of The Craft, you think of Nancy and her patent jackets," says Plewes. "So those were ways that we really wanted to pay respect to the original, but also reimagine the girls in a different way that didn't feel like we were just taking a blueprint and copying."

Ahead, Plewes breaks down how she created each of the witches' personal styles for The Craft: Legacy.

Following Lily's story arc in the film, her style changes the most. "In the beginning, it's very meek, but there are elements of herself that reveal she is water," says Plewes. (When we first meet Lily, she's wearing blue jeans and a pair of pearl earrings.) "As she becomes more embraced by the coven, her closet becomes more empowered and risk-taking."

Her style is the biggest nod to the '90s — long skirts, baggy jackets, floral prints — but as she better grasps her inner witch, her element (water) and crystal (aquamarine) start to take over her wardrobe. Think tie-dye (a print that heavily relies on water), blue clothing, and her signature pearls, which evolve from a simple pair of studs to statement earrings, a headband, a choker necklace, and even Euphoria-inspired eye embellishments. Her party outfit captures Lily the best: Inspired by Rodarte, Plewes tried to recreate the luxury brand's magical and romantic aesthetic by layering a printed Clover Canyon dress (shopped from The RealReal) over a Mango patterned top ("I loved it because it has rain drops on it").

The one thing that stood out the most in The Craft: Legacy, fashion-wise, is Lourdes' party dress. Made entirely of safety pins, the DIY look is something we could see being recreated on TikTok in the coming months. "I was kind of like Lourdes when I was in high school. I would customize my clothing and add safety pins and stuff," says Plewes. "I wanted each girl to feel like they put in a lot of effort into their looks, and I wanted to do something that was very DIY for Lourdes."

She turned to chainmail dresses, Alexander Wang, and the "The Rich Man's Frug" dance scene in Sweet Charity for inspiration. "There's just something very fun and a form of escapism in the movie that I really liked," says Plewes about the 1969 film. "I wanted to reference it for Lourdes in her own little stylized way. I wanted a '60s vibe and that's what it came to. But it took two people to get her in and out of that dress. She couldn't put it on herself, and she wasn't allowed to sit in it."

Along with her patent jackets, Lourdes, whose element is earth, also wore a lot of green, plaid, and velvet. Plewes even customized a pair of Urban Outfitters pants with her crystal malachite. "I sewed them all to the front of her pants, so she literally has crystal pants. That's also an easy DIY way to get her look," she notes.

If you can't quite pinpoint Frankie's personal style throughout the film, that's exactly the point. "She's chaotic and there's a lot of inconsistency to her closet because she's air," explains Plewes, who scoured ASOS, Aritzia, Zara, Urban Outfitters, and Gap for her outfits. Frankie's wardrobe was filled with purple pieces as an ode to her crystal amethyst, as well as different prints and silhouettes (leopard print paired with stripes and color blocking).

"When I was a teenager, I was really finding my personal style and who I was, and so the way I dressed wasn't always particularly edited," says Plewes. "I wanted her closet to feel a bit exploratory in that regard: pants one day, skirts another; baggie, tight; just different variations of styles, colors, patterns."

Plewes turned to gaming as inspiration for Tabby's style. "I looked at how women in video games dressed powerful," she says. "I wanted her to feel ready to take charge, much like a lot of cool video game characters. That's where a lot of her utilitarian look comes from, and a lot of her stuff came from army surplus stores."

Tabby's element is fire, and with the flame print being very much on trend, it was easy for Plewes to dress Simone's character in fiery-covered pieces, like a long-sleeve tee or high socks. But it's a pair of orango camo pants that "was a cool representation of fire just because the different tones in it." In the movie's party scene, Tabby wears them with a stylish corset top — a look that was the most inspired by gaming, notes Plewes.

In addition to her crystal firestone, Tabby is often seen wearing a crossbody bag that's crocheted out of copper. "It was her hero purse that we called Penny," remembers Plewes, who also sourced her jewelry from local Toronto businesses, like Dolorous, Courage My Love, and a mom-and-pop Tibetan shop. "Lovie was obsessed with that bag, and so it got its own name."

The Craft: Legacy is available on demand now.

NEXT UP
Fashion
In ‘Don't Worry Darling,’ The Costumes Reveal Deep Character Secrets
Fashion
See Every Look From The 'Don't Worry Darling' NYC Screening
Life
Paul Mescal Is A Single Dad In Emotional Aftersun Trailer
Life
A Studio Ghibli-Inspired Cookbook Is Coming To A Kitchen Near You