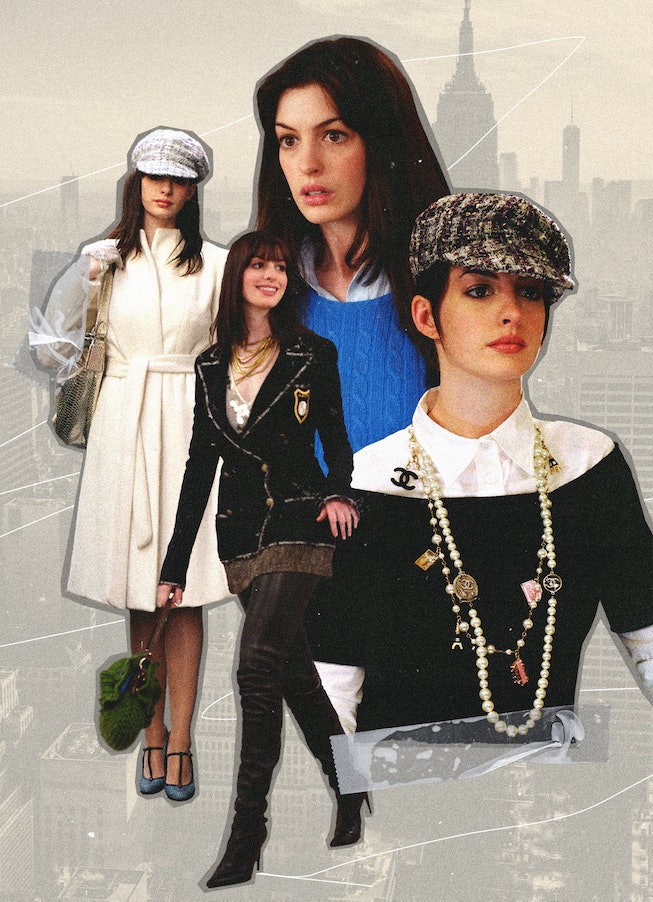 In the early 2000s, high-end fashion was inescapable in mainstream pop culture. Sex and the City made Manolo Blahnik a household name, while Gossip Girl showed teens as savvy consumers of designer bags. Print fashion magazines still loomed large and fashion blogs were taking off as a means of self-expression. The Devil Wears Prada, the 2006 adaptation of Lauren Weisberger’s dishy 2003 novel, is the ultimate '00s fashion film, capturing all the high-end trends and designers of the time in a breezy rom-com package.

As Andy, the bright young assistant to Anna Wintour surrogate Miranda Priestly (Meryl Streep at her most fabulously haughty), Anne Hathaway goes through a fashion transformation that’s basically a more sophisticated version of the nerd-to-princess one she went through in The Princess Diaries five years earlier. At the start of the film, Andy sees the fashion world as something beneath her journalistic ambitions, and dresses in a cable knit sweater paired with a plaid skirt. Her outfit has all the typical signifiers of frumpiness: Her sweater is pulled over a collared shirt, and her knee-length skirt is too long to be considered sexy by Hollywood’s narrow standards. Her makeover is inevitable.

The costumes in The Devil Wears Prada have real-world fashion cred, thanks to designer Patricia Field, who helped establish the designer-name look of the aughts with her work on Sex and the City and who was a fashion-world fixture for decades before that. Field’s looks are luxe and perfectly put together, but they often have a bit of an edge and tend to disregard Coco Chanel’s old adage about always taking off one accessory before you leave the house. Once Andy has her high-fashion transformation, she is never without a stylish accessory, whether it’s a newsboy hat, a bunch of necklaces, a pair of gloves, a statement bag, or some combination of the above. Working in fashion may have its pitfalls, but throughout the film, Andy learns how a well-chosen outfit can give you confidence and an on-point accessory game can serve as armor in a superficial world. Who knew that one of Hathaway’s lines — “The Chanel boots? Yeah, I am.” — would turn into one of today’s most viral memes and a timeless clapback?

It’s been 15 years since the film’s release, and it’s funny to consider that Andy would’ve even gotten her fashion job in the first place. It’s also even funnier still to think that she’d be getting paid for it. With the way publications have downsized and feminine labor has been even more devalued, it’s more likely she’d be an unpaid intern — much like Lauren Conrad, who famously interned at Teen Vogue on The Hills, which also debuted on MTV in 2006. The Devil Wears Prada took the power of fashion magazines as a given: Throughout, Andy is told that “millions of girls would kill for her job,” and the film balances fashion-world glamor and real-world chaos in a way that feels downright playful compared to today’s constant discussions about unpaid work and millennial burnout.

The Devil Wears Prada may take a number of fashion cues from the real world, using true-to-life designers and editors as inspiration, but a big part of its appeal comes from how it gives the world of fashion such a fairytale structure. Of course, Andy gets a happy ending, ultimately moving on to a job more suited to her intellectual interests, but she also gains an appreciation for the art of fashion (thanks in part to Miranda’s iconic “cerulean” monologue).

It’s a win-win situation: She gets to wear the thigh-high Chanel boots and see how fashion can be a source of fun while also developing skills from her fashion assistant gig that she can ultimately transfer to the job of her dreams. The Devil Wears Prada knows that fashion can sometimes be annoyingly elitist, but more importantly, it realizes that fashion can also empower and delight when done right.