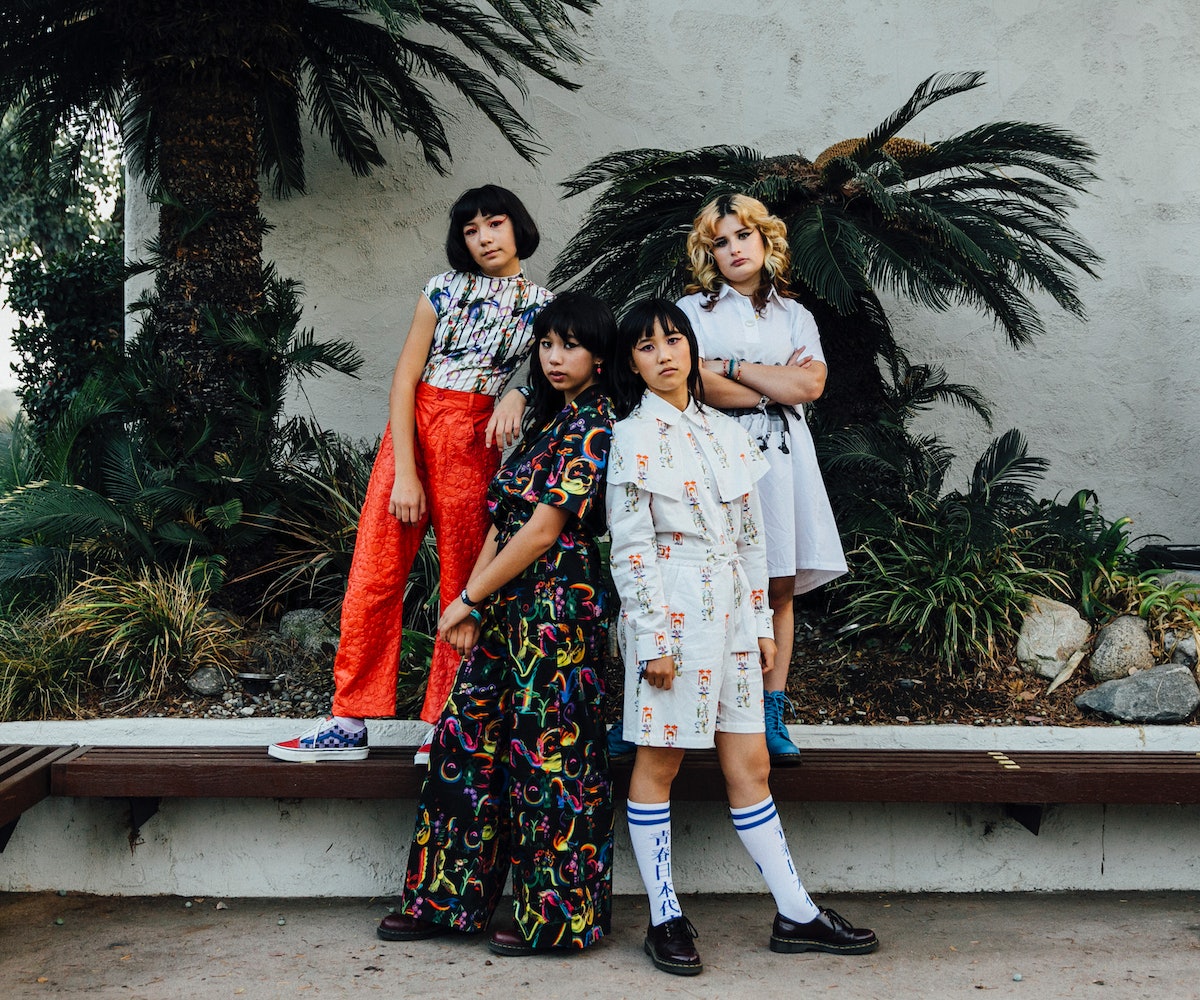 When it comes to performing live, The Lindas Lindas’ don’t have many pre-show rituals. Usually it’s just hanging out and eating a lot of snacks, or maybe that one time they did vocal exercises with Best Coast’s Bethany Cosentino at the Palladium in Hollywood. “We practice a lot, so by the time the show comes, we feel pretty ready and don’t get too nervous,” says Mila, the drummer (and youngest at 11 years old) of the teen punk band from Los Angeles.

Ahead of their latest performance at the 2021 Head In The Clouds festival, hosted by 88rising, The Linda Lindas got to explore the Pasadena-based Rose Bowl venue, from riding around in golf carts to trying hand-pulled noodles from Bang Bang and boba. They even brought their friends from school to check out the rest of the weekend’s performers. By the time they hit the stage, time flew by, recalls Lucia, 14. “Every time we perform, being on stage just makes me so happy, and experiencing a place where everyone gets to experience music together is so special,” she says.

The Linda Lindas’ rise to fame happened only a few months ago after a recorded performance of their hit song “Racist, Sexist Boy” quickly went viral online in May 2021. That same month, the four girls were signed to Epitaph Records, and have plans for new music all while juggling their busy school schedules. And although the group has captured worldwide attention after a breakout summer, they’re no different than when they first joined up as a band three years ago, especially when it comes to their personal style. “We just go for what makes us happy and will make us feel empowered on stage,” says Mila.

Lucia has also noticed that although everyone’s styles may differ from each other, there’s always a balance, which shows on stage through clothing. At Head In The Clouds, the Linda Lindas worked with Humberto Leon of Opening Ceremony, who dressed each member in pieces from the retailer-turned-brand’s Spring 2022 collection, which is set to come out at the beginning of next year.

“I’ve been enamored and inspired by The Linda Lindas’ spirit and was super excited to style them for the festival,” Leon, who’s worked with the band before on a music video, tells NYLON. “I wanted them to feel empowered and cool, which they already are, but still maintain their fun and eclectic style. Also, the signature Linda Linda cat-eye that I worked with makeup artist Valerie Vonprisk on is one of my favorite things from their look.”

“I wore a white shirt with ‘Opening Ceremony’ written in Chinese all over it,” says Eloise, 13. “The characters were all drawn out of plants and animals, and it had a very majestic cape that flapped around in the wind. I liked the matching shorts, too, because they went perfectly with my socks from the band Atarashii Gakko! I was super excited to see them the day before.”

Bela, 17, wore a white dress that had images of longtime OC muses, like Natasha Lyonne, Björk, Chloë Sevigny, Solange, Karen O, and Ali Wong, printed on the front, while Lucia had a matching set with an all-over alphabet motif and Mila was dressed in a top covered with flowers and peacocks with red textured pleather pants. “I really love wearing bold prints and colors, and sometimes my outfit choices are more limited because I play the drums,” says Mila. “But I think what I wore fit me perfectly.”

When they’re not snagging the latest fashion items ahead of their release, the band often turns to secondhand and thrifted clothes for their show looks. “Vintage shopping is our main source of finding clothes,” says Lucia. “And we have a lot of fun finding cool outfits that we can swap around a lot.”

Ahead, check out The Linda Lindas’ photo diary from the 2021 Head In The Clouds festival, from hanging out backstage to performing at their biggest venue yet.