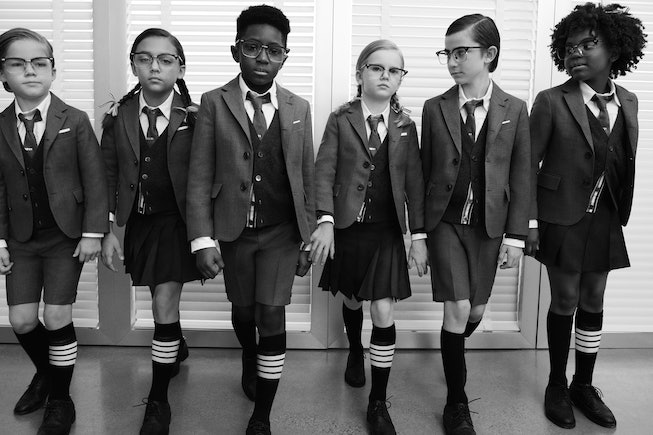 Thom Browne believes that children are our future, which is why he's now designing for them. On Sunday, Browne launched his first collection of childrenswear, a line of tailored suits inspired by prep school uniforms.

"What they have on is very tailored, very strict, and you would think that they would have acted differently than they normally do as kids, but they were exactly the same," Browne told Vogue of the campaign shoot. "They were playing and running around just as much as they would've been in any other clothing. It was great to see."

Browne hopes that the (very fashionable) kids who wear the collection will let their personalities come through, and not let the clothes do the talking for them.

"There's something really charming about their true personality really coming through, as opposed to the clothing being what dictates what type of personality someone has," he said. "I think when a lot of people go to buy clothing, they want their clothing to make them individuals as opposed to themselves being the individual."

The new Thom Browne childrenswear collection is available now. Prices start at $240 for the Oxford shirts and go up to $1,250 for the wool chesterfield coat. While we have no immediate plans to dress any children in these new pieces, we're placing our bets on which celebrity kid will dress up in these looks first. Stormi Jenner? Cardi B and Offset's Kulture? Khai Hadid Malik? Until then, check out images from the debut campaign, below.