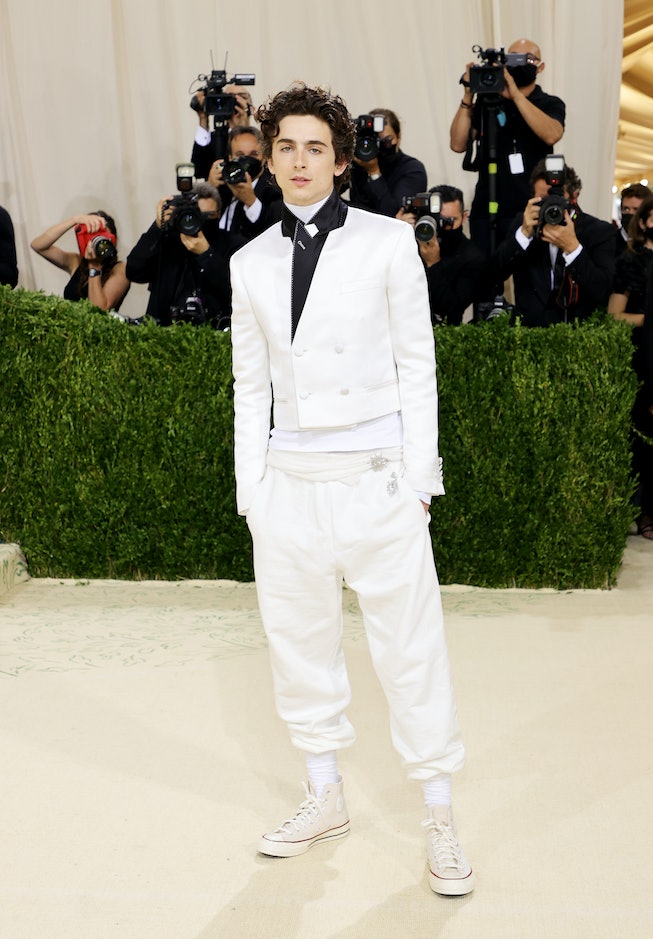 “This is a bit of everything,” he told Vogue red carpet co-host Keke Palmer.

Keeping up with this his casual footwear, Chalamet paired his tailored jacket with white sweatpants, which were pinned with vintage Cartier brooches from 1928.

Ahead of his red carpet appearance (his first ever for the Met Gala), Chalamet took to Instagram Live, giving his followers an inside look at the Met’s Costume Institute exhibition, In America: A Lexicon of Fashion. During the live session, Chalamet seemed to be wearing part of his red carpet look, which was also in all white and included Converse sneakers. So, it’s likely that he wrapped up his exhibit tour, threw on a jacket, and hit the red carpet for his highly anticipated appearance.

NEXT UP
Culture
The Cutest Couples At The 2023 Grammys
Fashion
Olivia Rodrigo Wore A Sheer Slip Dress To The 2023 Grammys
fashion
All Of The Sexy, Sparkly Outfits From The 2023 Grammys Afterparty
Beauty
Charli D’Amelio and Landon Barker Wore His & Hers Goth Manis To The Grammys
Style + Culture, delivered straight to your inbox.