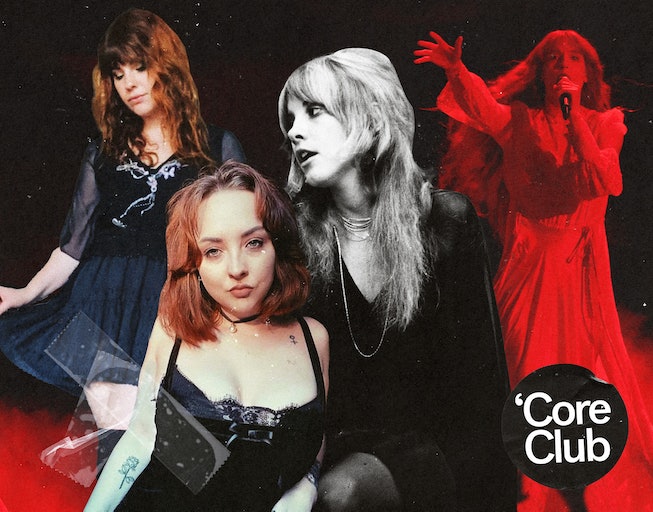 Whether it’s a fashion trend on TikTok or a certain style taking over Instagram, internet aesthetics are always changing. Our series ‘Core Club breaks down the looks that you’re starting to see a lot on social media and highlights the people and brands channeling it best. Next up: whimsigoth.

The internet is under the spell of a new aesthetic inspired by witches and their witchcraft. Dubbed whimsigoth, the magical fashion look is explanatory through its title — a cauldron mixture of “whimsical” and “gothic.” Its popularity naturally kickstarted through TikTok, as #whimsigoth has attracted 12.3 million viewers, while #whimsigothic boasts 22.3 million viewers and counting.

The sartorial charm of whimsigoth is how it layers and billows, giving a dramatic silhouette to the body. There are plenty of pop culture references for fashion inspiration, too, says Seddon. In addition to Sabrina the Teenage Witch, fans of the aesthetic can look to such TV and movie characters as Phoebe Buffay from Friends, Sally and Gillian Owens from Practical Magic, as well as the shows Buffy the Vampire and Charmed. Celebrities who dress whimsigoth IRL include Helena Bonham Carter and ‘90s-era Lisa Bonet.

But Stevie Nicks’ plays the biggest role behind whimsigoth for her personal style and signature sound. “Even though whimsigoth was [first] popular in the ‘90s, Stevie Nicks was an OG blueprint of the style with her layered skirts, dramatic sleeves, and witchy style,” Maranda Vanderggriff shares with NYLON. “Florence Welch of Florence + The Machine is a modern example.” Add to the list Mazzy Star, Fleetwood Mac, Tori Amos, Fiona Apple, and The Cranberries, too. Even Halsey’s newest album, If I Can’t Have Love, I Want Power, is another modern-day musical illustration of the witchy trending-again aesthetic.

“Whimsigoth is interesting because it has elements similar to several other aesthetics, but a subculture all its own,” adds Vanderggriff. “It shares gothic influences with the goth subculture and earthy elements of bohemian styling. It’s both dark and feminine, sleek and opulent.” The experimental graphic design work of Margo Chase (a creative force behind the branding of Buffy, Charmed, and more), album artwork from Vaughan Oliver, and the fantastical realms of Tim Burton all influence the aesthetic, as well.

Celestial and astrological motifs often anchor the whimsigoth aesthetic, whether it be tarot, horoscopes, or through crystals, mood rings, and oils that promote healing powers. “Whimsigoth fashion represents a witchy lifestyle inspired by films such as the craft and practical magic,” says Rebecca Kershaw. “You love to thrift for vintage treasures and you most likely love anything to do with spirituality and witchcraft and incorporate these practices in your daily life.” For the longest time, the style likely existed without terminology, notes Kershaw. “I think there’s always been a love for this style, however no one really knew what to call it. Suddenly, a term started being used all over TikTok and people were just so excited they could finally have a word to describe something they love and could connect with like-minded people to share inspiration.”

It is crucial to note the controversy and cultural appropriation that is also aligned with western cultures capitalizing on astrology in a harmful way to indigenous communities. The rising popularity of whimsigoth does lack extensive diversity and size-inclusive representation, which will hopefully change with more people having access to the style through the internet. Witchcraft, in general, has been synonymous with the oppression of the patriarchy that women and girls have faced and continue to endure. Though witches continue to cast a spell over the masses, they have been a figure of fixation for centuries and for more centuries to come. Whimsigoth is a clustered, charming aesthetic, hexing the internet with its magical style sense.

NEXT UP
Fashion
The 7 Going-Out Tops Taking Over Your Summer Wardrobe
Fashion
On The Style Clichés & Fashion Messages In But I’m A Cheerleader
Fashion
The Powerpuff Girls Have Their Own Fashion Collection Out
Fashion
How To Style The Mini Skirt In 2022, According To Celebrities