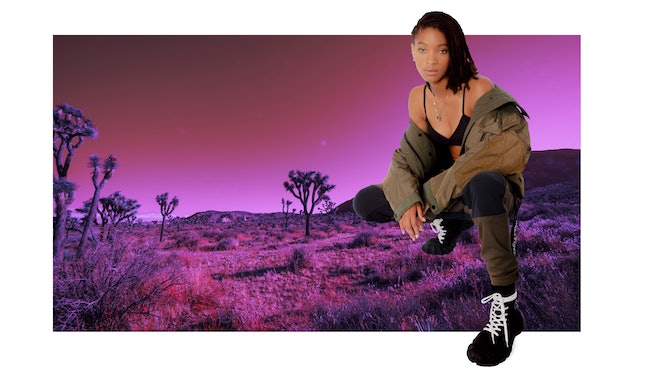 Following the release of her album The Anxiety with Tyler Cole in March, Willow Smith has a new fashion gig as brand ambassador Onitsuka Tiger. She stars in the Japanese label's Fall 2020 campaign, released on Wednesday, and a portion of the sales from the collection will go towards the NAACP Legal Defense and Educational Fund.

"In this campaign, we expressed Willow's natural beauty and strength, as well as her love for the Earth, which oozed from the bottom of her soul," said Andrea Pompilio, the Creative Director of Onitsuka Tiger, in an official statement.

Smith, who shot the campaign off in a desert somewhere prior to the COVID-19 pandemic, is no stranger to the fashion world. She's garnered a modeling contract, magazine covers, front row seats at runway shows, and, at the age of 15, was named a Chanel ambassadress in 2016.

"I immediately connected with Onitsuka Tiger's vision for their new campaign," said Smith in an official statement. "I loved that we were able to align both of our energies and create something that promotes a positive existence in this world. I’m excited for the future of the brand."

Well, the world could use some positive existence right now. Even if that's coming through a fashion campaign.

Check out photos from the Onitsuka Tiger campaign, starring Smith, below.