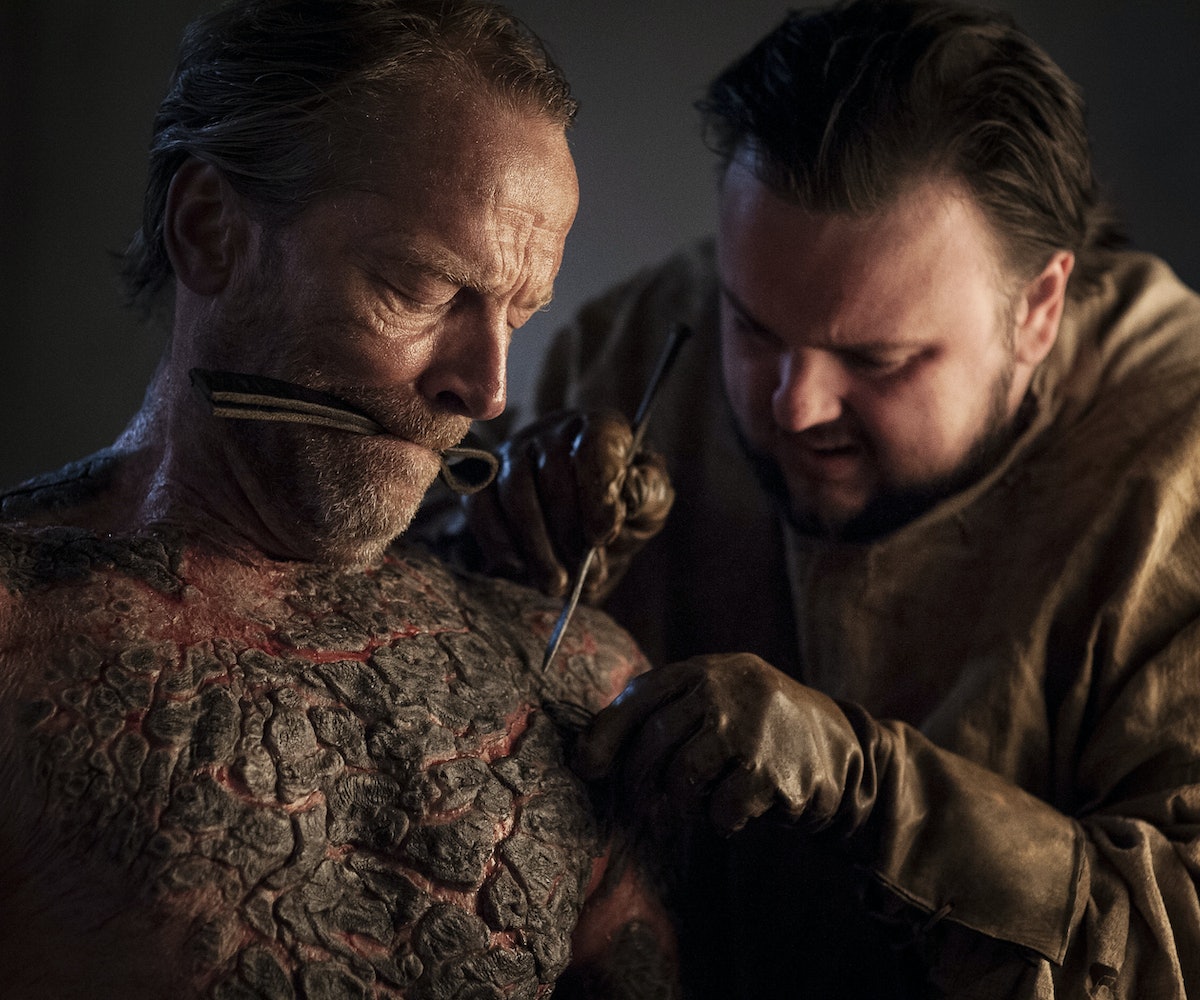 HBO's Game of Thrones is not a show that holds punches. When it comes to violence and gore, very little is left to the viewer's imagination. And as much as I love the show, there are some scenes that I wish I could unsee forever—not all of them involve extremely graphic violence, either.

Since I can't erase these moments from my memory, I've decided to face them head-on. And you know what they say: Misery loves company. So please join me in reliving just a few of the absolute grossest scenes on Game of Thrones. I hope you find comfort in the fact that we only have to prepare ourselves for scenes like these for one more season.

I never thought that I would judge a woman for breastfeeding her child... until I saw Lysa Tully nursing her son Robin in Season 1. Robin is nearly as big as his mother in this scene. And in addition to surpassing the normal breastfeeding age range, he's extremely bratty and volatile, making his reliance on the boob even more uncomfortable to witness.

Ramsey Bolton is possibly the most sadistic character to ever appear on Game of Thrones. He delights in the psychological and physical torture of his victims and is known for flaying people alive. While we never see the actual moment when he castrates his prisoner Theon Greyjoy, we do see the after-effects, including this scene in which Ramsey torments Theon by eating a pork sausage in front of him, and then forcing this once-proud prince to deny his family name and assume the identity of "Reek."

Jaime raping Cersei next to their son's dead body

By Season 4, viewers had become well-accustomed to the show's depictions of incest, rape, and death. But the full context of this interaction is overwhelming. It's not just that Jaime rapes his twin sister—whom he is both repulsed by and in love with—but it's that he does it right next to the dead body of the son they conceived together. Ew.

Yes, it's pretty horrific that Cersei has to be paraded through the city, completely nude to the chant of "shame" in Season 5. It is also uncomfortable to watch her be verbally demeaned by filthy onlookers. I don't start squirming in my seat, though, until those onlookers begin spitting and throwing things at her. By the time she arrives at the Red Keep, her feet are bloodied and she's covered in more bodily fluids (and solids) than I care to elaborate on at this moment.

The transition from Westerosi exile to Dothraki queen was not a smooth one for Daenerys in Season 1. The young Khaleesi had to adjust to new Dothraki customs and sex with her husband. Then, just as she was acclimating to her new life as the wife of a khal, she found out she was pregnant. In this scene, she is required to complete another ritual that involves her eating the raw heart of a stallion in order to show the rest of the tribe that her baby will be strong. Daenerys literally gags trying to keep the flesh down, and she's covered in horse blood by the time the whole ordeal is over.

I thought I hated gender reveal parties, but I'd take a cake dyed baby blue over this, any day.

Jon Snow is one of the undeniable good guys on Game of Thrones. Still, he's pulled off some kills that have made me want to cover my eyes, like during the raid on Craster's Keep to take down some Night's Watch mutineers. It gets bloody, of course, especially when Jon puts his sword right through the back of the mutiny's leader's head, and we see the sword comes clear out the other side. I'll admit, these special effects are sick. But they make me a little sick too.

I am so grateful that I've never made it onto Arya Stark's kill list. The youngest Stark girl is ruthless in her commitment to get revenge on the people who have wronged her and her family. Her murder of Ser Meryn Trant in Season 5 is a great example. She stabs him in both of his eyes, then several times to the chest and torso. Finally, after revealing her identity, she slits his throat.

To be fair, he deserved it, but it's still pretty intense to watch.

Samwell Tarly deserves a nice, quiet life with Gilly and her baby. But winter is coming, so he's sent to the Citadel, to learn the skills of a Maester. But he must be an apprentice first, and that means some really icky tasks, even if they are productive, like when he treats Ser Jorah Mormont, curing him of the fatal disease, greyscale.

This might not sound too bad on the surface, but considering the cure involves treating the infected skin by scraping it off little by little, only to reveal a thick layer of pus, it is actually pretty horrific. To really gross us out, the episode transitions from Sam scraping off skin to someone cracking open the crusty lid of a pot pie, revealing its gooey interior. Meanwhile, it'll be hours before I can eat again after just writing about this.

Samwell’s domestic duties at the Citadel

As crazy as it sounds, curing Jorah's greyscale was a side project for Sam. His actually Citadel duties required him to clean up after the other Maesters, including emptying their toilets. He basically had to wash poop out of bowls every single day.

The Game of Thrones editors also had a good old time creating transitions for this scene, going from poop-filled pots to bowls filled with brown soup. Nope. Still can't eat.

In what is undeniably the grossest scene in the series, fan-favorite Prince Oberyn Martell faces off in combat with The Mountain in Season 4. Not only was Oberyn fighting for Tyrion Lannister's innocence in the murder of King Joffrey, but it was an opportunity for him to exact revenge on the man who raped his sister and murdered her and her children. Our emotional investment in Prince Oberyn's success makes what actually happens to him even harder to watch.

Here's the thing. Gregor Clegane is called The Mountain because he is really big and really, really strong. Oberyn gets the better of him during their fight, but, at the very last moment, The Mountain is able to get a good grip on his foe's head so he can literally squeeze it until Oberyn's skull and face are crushed from the pressure. Ouch.

Now that you've made it through all of that, you deserve this palate cleanser of bloopers.

NEXT UP
Culture
6 Shows To Binge Once You've Finished 'The White Lotus'
Culture
Phoebe Dynevor Will Not Return for Bridgerton Season 3
Culture
Succession Season 4 Trailer Explodes With Family Drama
Entertainment
Beyoncé Is Now The Most Awarded Artist In Grammy History
Style + Culture, delivered straight to your inbox.