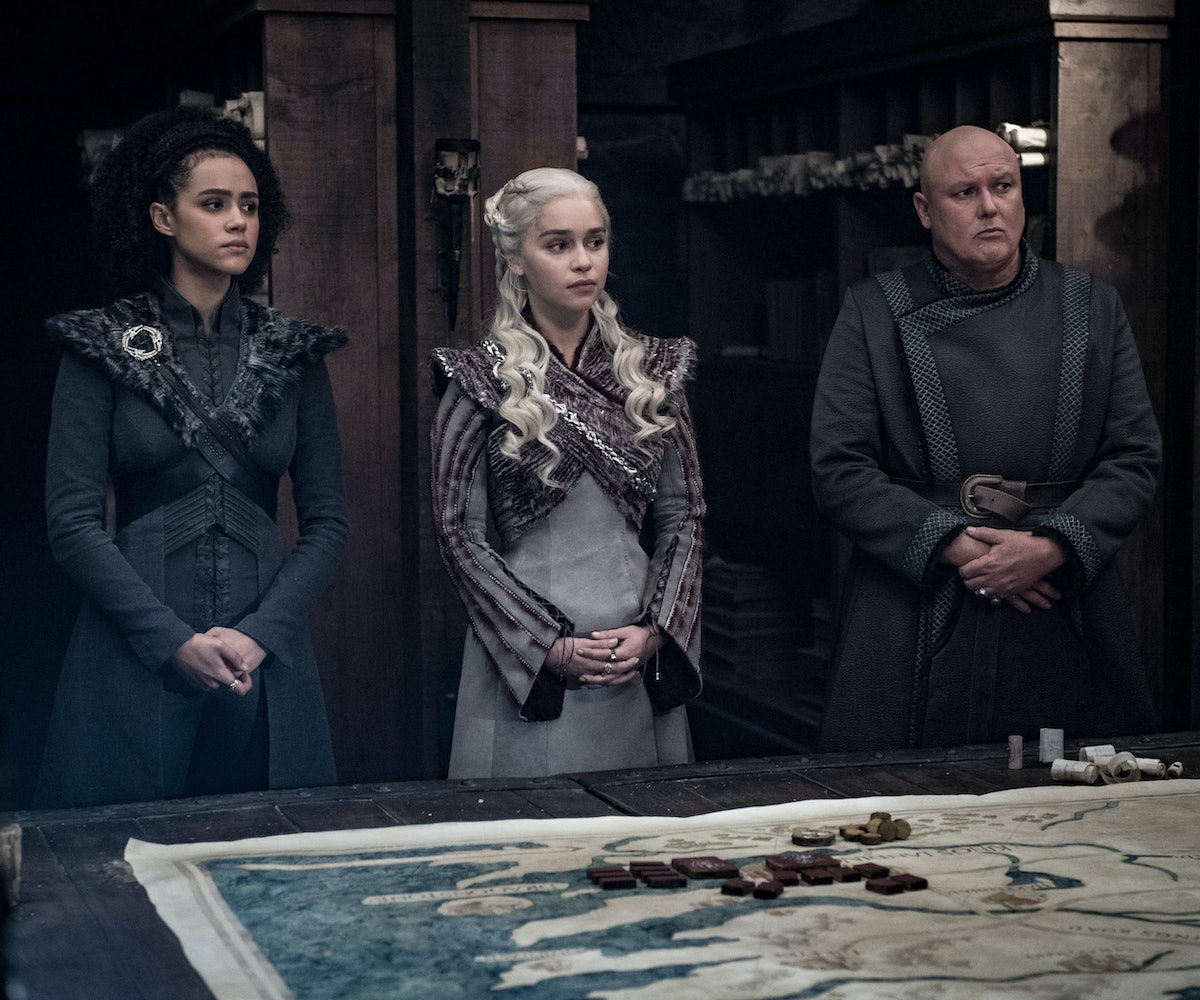 This should be an exciting time for the Game of Thrones fandom. It's the final season, the Night King is dead, and we are going to find out who will end up on the Iron Throne very soon. For seven-plus seasons, Game of Thrones has kept me on my toes and excited about what the showrunners will do next. Yes, they've built certain characters up for me to root for, only to kill them when I was least expecting it, but I've learned that's just how the game works: You win or you die. And so I was excited that, with only two episodes of the season left, I'd be swapping theories and subplots in a frenzy with fellow GoT fans. But after last night's episode, "The Last Of The Starks," that's not the case. Instead, I'm frustrated, exhausted, and resenting the fact that I have to put up with this show for two more weeks.

The aftermath of The Battle of Winterfell has apparently left everyone in the North a little delirious. All the characters left seemed to have turned into weird doppelgangers of themselves, and years of character development were thrown out of the window in one fell swoop. It seems like keeping the momentum going after the epic showdown between the living and the dead was a challenge that the Game of Thrones showrunners couldn't really live up to, and so now, everything that needs to happen to tie up the narrative is getting shoved into place in a way that seems designed to piss everyone off.

They say the devil is in the details, and there were several details from "The Last of the Starks" that left me unable to sleep last night—and I'm not (just) talking about the errant Starbucks cup left in front of Daenerys at the post-battle feast. There was also the matter of Jon Snow sending his Direwolf Ghost off to Castle Black with Tormund without so much as a single pat on the head. Ghost lost an ear defending the living, damnit! Give him a hug goodbye, Jon.

And, speaking of Tormund, I can't help it, I kind of hate that he and Brienne will never sleep together, and that Brienne instead winds up getting her heart broken by Jaime Lannister. Although she and Jaime have a brief period of happiness, it's quickly interrupted once he flees to King's Landing, leaving Brienne crying and begging for him to stay. A lot of people were upset about Jaime's rush to Cersei, but it seemed pretty obvious that Jaime isn't going to save his sister, but to be the one to finally destroy her. Still, it was pretty hard to watch Ser Brienne of Tarth crying over any man. We prefer her emotions to be of the joyful variety, like when she became a Knight of the Seven Realms, just two episodes ago.

And then there's Gendry. After Daenerys officially declares that Gendry is no longer a bastard, but that he is now Gendry Baratheon, Lord of Storm's End, Gendry sees his new title as an opportunity to make an honest woman out of Arya Stark and proposes to her, so that she can be his "LaDy." That poor boy thought that Arya "Head Assassin In Charge" Stark would give up her kill list to lay up with him and have babies in a castle. Obviously, she said no. Game of Thrones needs soldiers and strategist, not naive heartthrobs.

But while Arya's character has stayed consistent from episode one, last night brought the complete disintegration of other, usually reliable character arcs. Tyrion can no longer even be considered marginally clever. After making poor decisions all season long, Tyrion's latest was purely delusional and involved him thinking he could convince Cersei to surrender, which led to the public execution of one of our most beloved GoT characters,Missandei.

Missandei's death isn't only Tyrion's fault though: Daenerys is responsible too. After she spent the first half of the episode sulking because people like Jon more than her, and attempting to curry favor by giving Gendry a lordship, Daenerys ignored Sansa's advice to let her tired, wounded troops rest after their arduous battle, and hastily sent them south, for a premature attack on Cersei. But, of course, Daenerys was ambushed by Euron Greyjoy and his dragon-killing-crossbow-armed fleet of ships, and both her dragon, Rhaegal, and, ultimately, Missandei, died as a result.

And, sure, Daenerys is having a hard time right now. She's spent her whole life in an uphill battle to get back to Westeros. But that's all the more reason why she should be making smart and strategic moves, not rash decisions. After overcoming years of adversity and soaking up wisdom from cultures all over the world, Dany is now acting petty and irrational, and it has already cost her—and the viewers who wanted a better final battle between worthy opponents. Which is why I don't like this Game anymore. Let Arya cross the remaining names off of her kill list so that we can all go home.