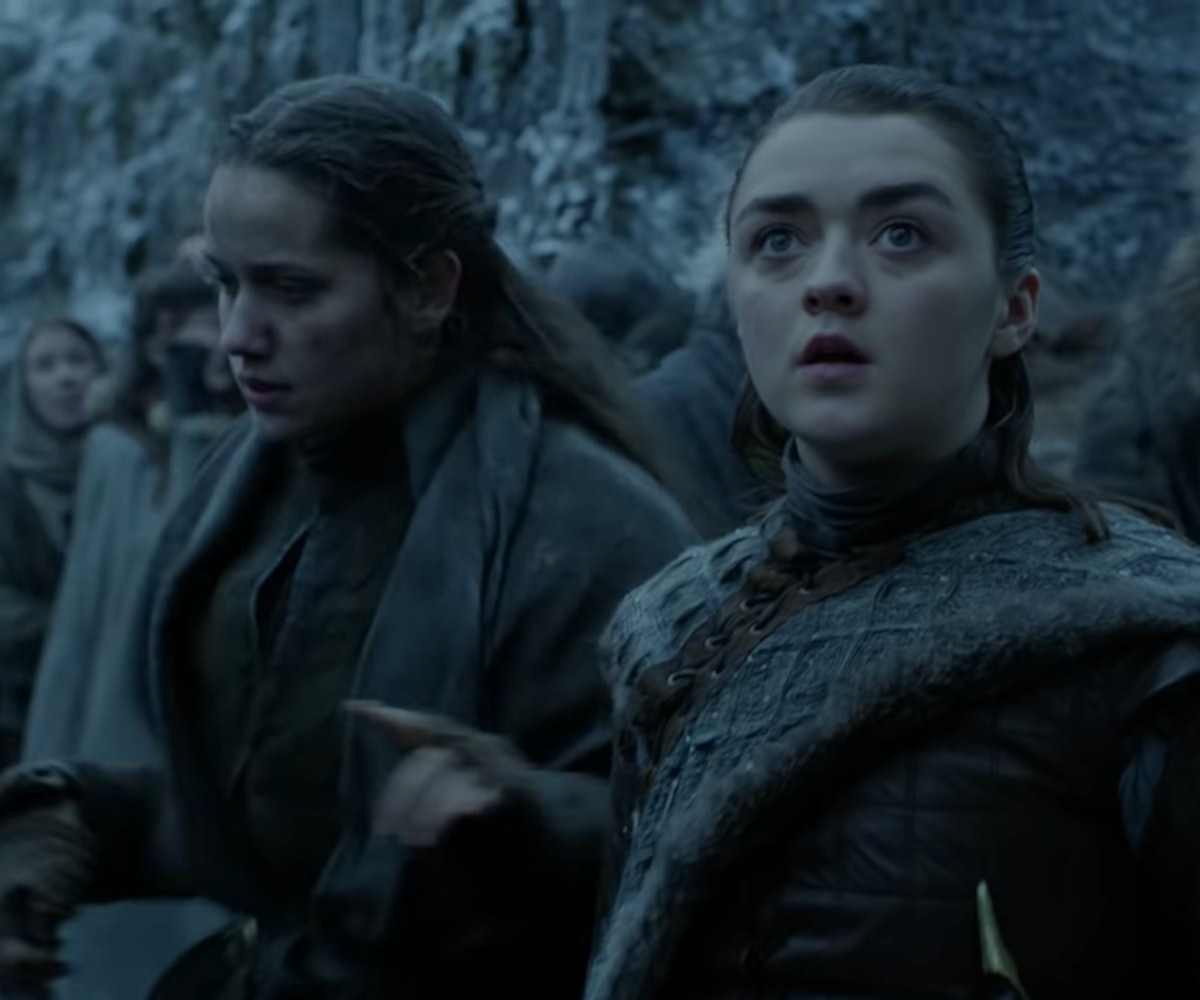 HBO has finally revealed the official trailer for Season 8 of Game of Thrones, and with it, the first bits of new footage after months of teasing. And even with only a few short minutes of quick clips and dramatic single-line voiceovers, fans have already concocted plenty of theories about the new season—including guesses at who might die.

First, though, we see Arya Stark, a dirty, bloody mess and breathing heavily, before she sprints away from an unknown evil through the halls of what looks like Winterfell. (Perhaps, as HuffPost points out, she's seeking safety during the epic Battle of Winterfell?) Arya, though, reminds us that she "knows death," and that it has "many faces." Still, she might not be quite ready for this new iteration of death, as much as claims to be "looking forward to seeing" it, all while brandishing a blade of Dragonglass.

Though Arya looks to be in peril, the (momentary) safety of others is confirmed: Tormund, the Night's Watch's Dolorous Edd, and Beric Dondarrion are alive and back for the final season, despite speculation that they'd perished as the Night King and his army of the dead broke through the Wall.

Other beloved characters are back too, by which we mean the dragons, who play a prominent part in the trailer, whether by flying over Sansa Stark's head as she stands on the battlements of her family's castle, or just hanging out with Jon Snow and Daenerys Targaryen. One Twitter user also noted that Jon's clear intimacy with the dragons (and their mother, Daenerys) just might indicate that he'll be riding one soon enough, and probably the one named after his father.

We also see snippets of Gendry and Davos, Varys and Jorah, and Missandei and Grey Worm (kissing, no less!), and a glimpse of Tyrion looking in wonder up at the sky. And then there is Jaime Lannister, last seen conflicted over the news that his evil sister-love Cersei is pregnant with his child. Will he stay loyal to her, or will he help the Stark-Targaryens? As if there were any doubt, Jaime is seen in the trailer, solemnly intoning: "I promise to fight for the living, I intend to keep that promise."

And so while Cersei is only dead on the inside, not fully dead like a White Walker, things don't really bode well for her. And yet, in the trailer, she still looks quite queenly, from her stoic expression to the way she holds her wine goblet.

Whether or not you are a fan of deep-reading each detail of the trailer and predicting plot points, one thing is for sure about the final season: Winter is here, and all men must die.

Watch the official trailer below. Game of Thrones returns to HBO for a final time on April 14.