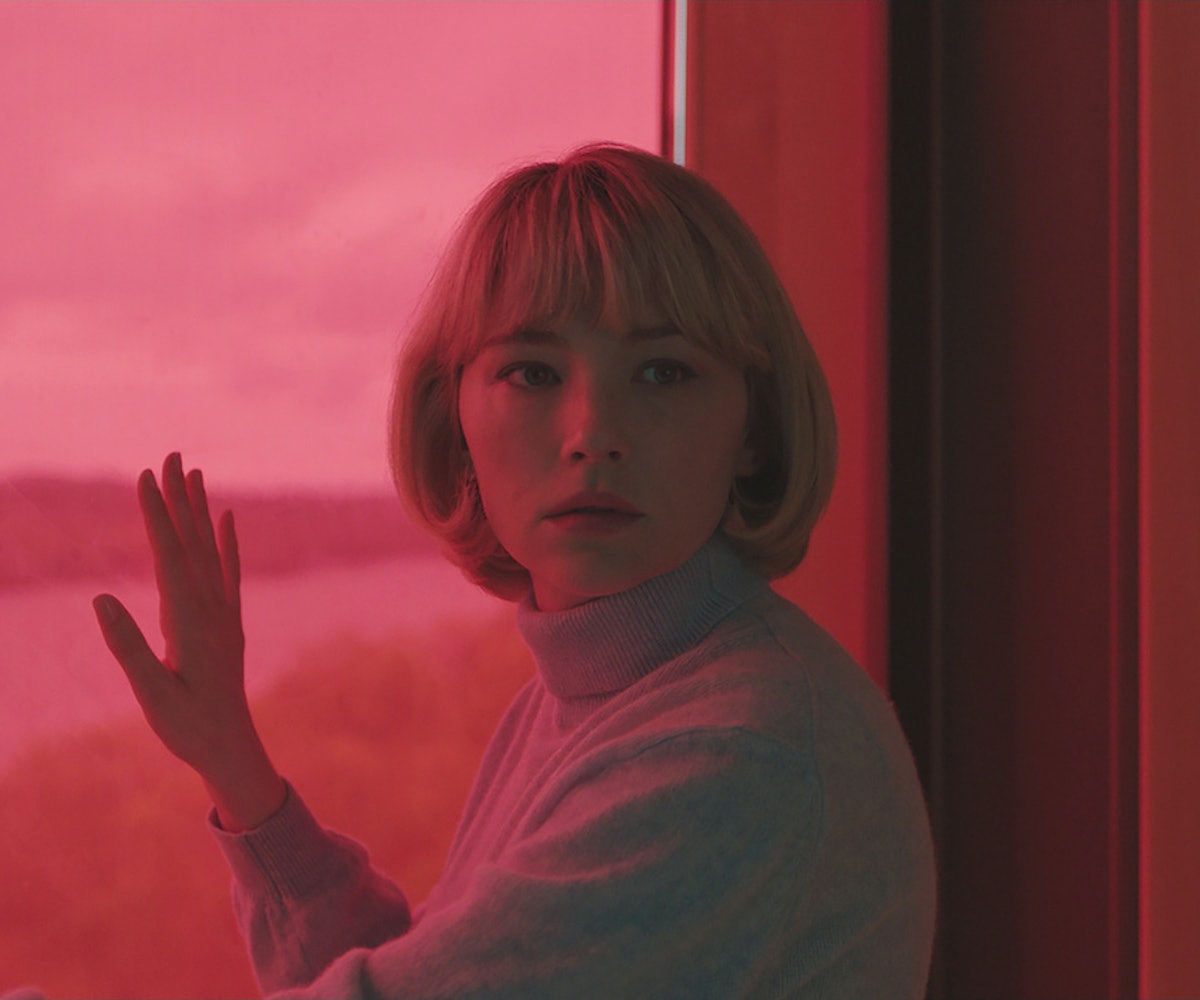 Haley Bennett found out she was pregnant on the day before she was scheduled to begin filming. Normally, such a revelation would have minimal bearing on an actress preparing for a twenty-day shoot — chances are she wouldn't even be showing by the end. But in this case, the discovery held a special significance for the actress, since the film she was starring in and producing, Swallow, out in select theaters now, followed her character through the bumpy early days of pregnancy, as well.

Swallow stars the 32-year-old performer as Hunter, a pristinely put-together housewife who will stop at nothing to please her distressingly attractive and filthily rich husband Richie (Austin Stowell). She does the cooking, she does the cleaning, and somehow, she still finds time to do the sexing. As Bennett tells me one evening over glasses of wine at Neuehouse Madison Square, "It was supposed to be this nod to a time where women were very idealized and trying to be the perfect homemaker, the perfect host, the perfect wife, the perfect sex kitten."

But like many women who strove and continue to strive for those ideals, Hunter is unfulfilled by playing these roles. "This is what she needs to do in order to get love," Bennett clarifies, "because deep down, there's this deep, hidden, buried shame, which is revealed as time goes on." The cracks begin to show quite early. Hunter is wont to bombarding her husband with questions like, "Do I make you happy?" When she senses that he may be upset — as she does when he responds to her choice of sky blue drapes for their in-home theater with, "It sounds a little hipster" — she's quick to ensure, "You're not mad at me?" Later, "I just want to make sure I'm not doing anything wrong."

In this way, Hunter fits in with a long line of women in cinema. The trope of the "unhappy housewife" is quite typical, but Swallow isn't a typical film. Instead of succumbing to ennui, Hunter pushes back by taking drastic measures to regain some of her lost control. Per the film's title, Hunter begins to swallow things. Marbles, thumbtacks, safety pins, jacks — any small object she can get her hands on. And once these foreign objects have made their way through her digestive tract, she cleans them and then precisely arranges them in a line on her dresser, displaying them like trophies — each object an obstacle she's overcome.

In time, Hunter's habit is diagnosed as Pica, a real psychological disorder defined by a compulsive need to ingest items with no nutritional value. As explained by the writer/director, Carlo Mirabella-Davis, the film was initially inspired by the story of his grandmother, a homemaker in the 1950s who, like Hunter, was in an unhappy marriage, and dealt with it by obsessively washing her hands and "going through four cases of soap a day and twelve bottles of rubbing alcohol a week." "She was looking for order in a life she felt increasingly powerless in," he notes, and like many women of her generation found herself placed in a mental institution, where she underwent electroshock therapy and a botched lobotomy, leaving her without a sense of taste or smell.

When Bennett was first sent the script for Swallow, it came with a "generous letter" from the writer/director, detailing how much he loved her work and how he wrote this film with her in mind. "I was absolutely like, 'Why? Why do you envision me in this role?" Bennett recalls about her initial reaction upon reading through it for the first time. "Do I strike you as unstable?"

But eventually, she came around. "I was a combination of intrigued and disturbed and empathetic to Hunter's situation," she remembers. So she arranged a meeting with Mirabella-Davis to give him a chance to share his vision for the project, since, as she mentions, "it does tackle complicated issues, like women's health, mental illness, control over women's bodies, and patriarchy." All very complex issues, indeed. "So how can we tell this story about this woman without any judgment?" she wondered. "How can we tell it from the most authentic point of view, without truly leaning into the grotesque factor of some of the elements of the film?" The elements, of course, being "the things that she swallows."

"How can we tell this story about this woman without any judgment?

Bennett did a lot to prepare for the role. "I had a team of researchers sending me articles, videos, everything they could find on Pica," she tells me. She was particularly taken by one woman who had a fondness for ingesting rocks. She didn't care much about the rock ingestion itself; rather, she was more fascinated by what psychological relief this ritual gave. "What I loved most about her is how chipper she was whilst eating these rocks, like it was truly a fulfilling compulsion for her," Bennett informs me, while attempting to mimic the woman's pleasure-filled facial expressions. "She's going into her garden and she's digging rocks up from her riverbed and you could hear her chewing on the rocks! I was like, 'This is amazing.' It's a fully visceral experience of this woman eating rocks like it was a snack, as if it were Doritos or something."

You can see this inspiration playing out in Bennett's performance. In one of the film's best sequences, Hunter tries to swallow a silver thumbtack, but quickly spits it back up as she feels its pointy end cutting up her mouth. After going to the bathroom mirror to examine her tongue, which is bleeding, she then takes a seat on the couch and tries to focus on other things. But something keeps drawing her back to the saliva-coated object sitting there on the kitchen counter, taunting her; she can't help but to keep glancing over. Finally, she gives in to the urge, jumping up and throwing the tack into her mouth, grimacing as she agonizingly forces it down her throat. She chokes and yells for a few seconds, but then she gives way to a sudden calm. When it's all said and done, instead of pain, her face shines with a glimmer of satisfaction. The deed is done.

Part of the film's brilliance is in the way it challenges the viewer to not judge Hunter. Most of us claim to support women's bodily autonomy, but it's difficult to separate Hunter's actions from the reality that, by swallowing these dangerous objects, she's potentially putting her unborn child's life at risk. Which brings m back to Bennett's own pregnancy. When asked whether or not the knowledge that she was pregnant informed her approach to the role, Bennett demurred. "Other than the inconvenience of being tired and sick, I truly didn't feel connected for the first four months of my pregnancy," she admits. "I feel really guilty that I didn't immediately feel this deep connection with my unborn child."

Hearing this response, I couldn't help but point out that, in its own way, the disconnect she felt with her own child did share a direct parallel with the trajectory of her character. Much of the negative response Hunter receives about her compulsion — from her husband and his colleagues, from her mother and father-in-law — is not rooted in the disease itself, but rather in the harm she might be subjecting her unborn child to. Yet, it's the fact that Hunter feels empty despite being pregnant that drives the expecting mother to spend the majority of the film trying to fill herself up in other ways. Bennett may not ingest foreign objects, but the pressures of motherhood weigh on her in other ways, she agrees.

Still, Hunter's journey is marred with more trauma than Bennett says she can ever imagine. Avoiding spoilers, Swallow is much more than what is seen in its trailer, or even its first few scenes. Throughout the film, secrets are revealed and dark pasts are uncovered. It becomes clear that Hunter's Pica isn't merely a response to her unfulfilling life as a stay-at-home, expecting mother; it's actually a response to a much longer pattern of abuse. As the curtain on her life is pulled back, Hunter emerges as a severely tragic figure in desperate need of healing, and it's the therapy she's forced into that pushes her towards this revelation. Or, to put it in Bennett's own words: "Hunter has a real journey of self-discovery, and the swallowing compulsion is the thing that leads the way to her becoming aware of these unexplored traumas."

Swallow is now playing in select theaters and available on VOD.