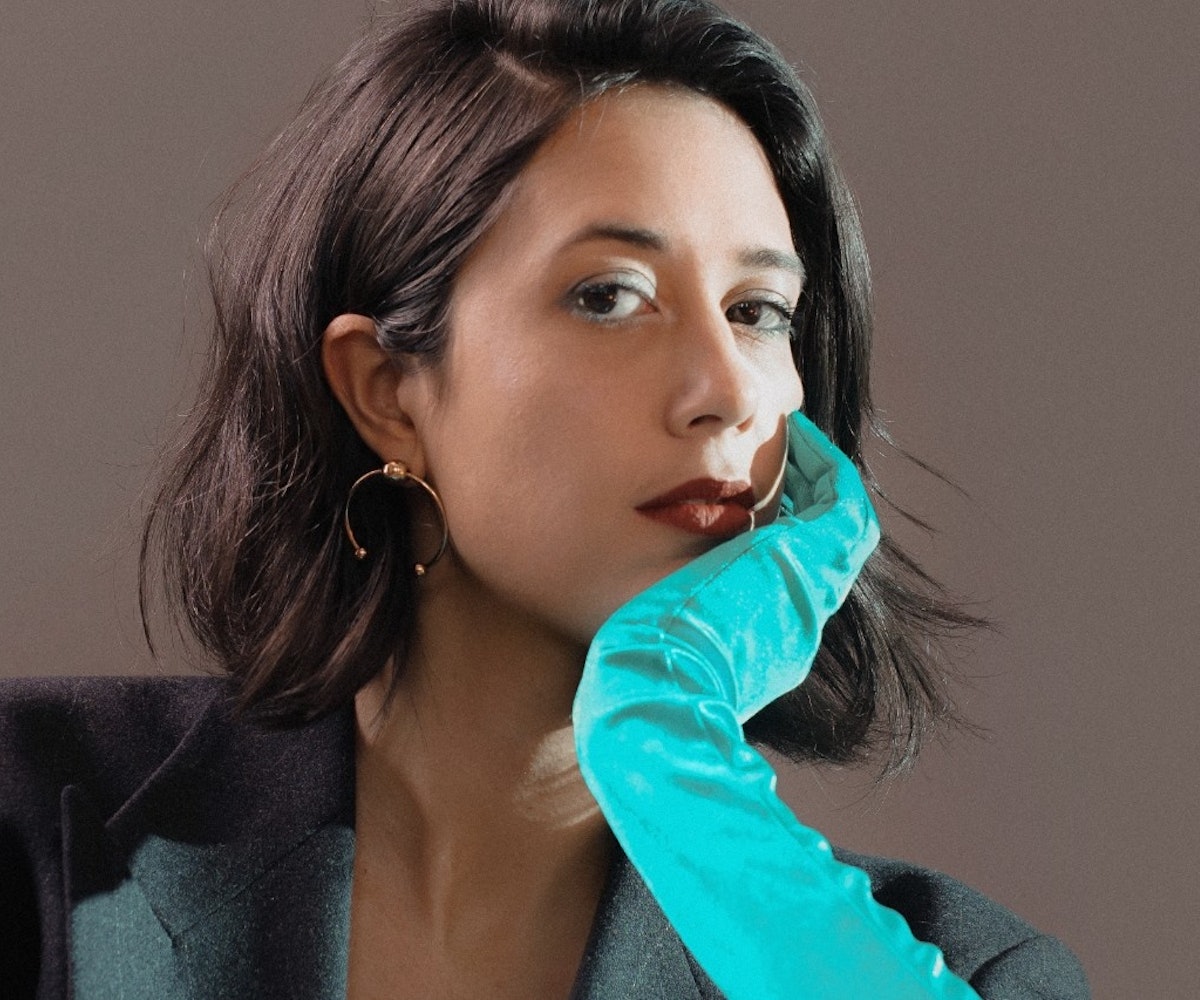 "Searching for home has been such a theme in my life" Nandi Rose tells me one chilly morning over Skype. Nestled in a corner of her new house, the western Massachusetts native, who creates vivid, transcendent synth-pop as Half Waif, recently moved upstate New York with her now-husband Zack Levine. "I talked for many years when we lived in Brooklyn about wanting to move to the Hudson Valley, and I did it," she says. "So why am I still not content?"

Rose's fourth album as Half Waif,The Caretaker, grapples with that restlessness. Conceptualized as the story of a groundskeeper tending to an estate, the project, out now, pulses with the ambient sounds of Rose's surroundings as she navigates fading friendships and the unease of isolation. Growing up and moving on is not a straightforward process, and the record's striking production captures that whirlwind of emotions. Stormy chord progressions and eerie pitch-shifts convey disquiet, while sweeping strings and Rose's soaring vocals crash in waves of catharsis.

Whereas 2018's Lavender grew lush through collaboration, The Caretaker sees Half Waif return to a solo project. Rose, still dedicated to complexity, paints now with a more deliberate hand. The cascading synths and orchestral production on "Siren" prove that cinematic arrangements still have a place on the record, but Rose finds the most power on her more minimal compositions. On the stunning closing track "Window Place," Rose declares her homecoming over restrained instrumentals: "My life is like a window / The view is changed / I can never leave the building / But it's home all the same."

A longing for summer also saturates The Caretaker, representing Rose's image of her best self. "It's the internal landscape that I want to reflect," she explains. "Even in winter, when things are bleak, I'm reaching for this time when the yard is full of greenery and life, and I'm more content and loving myself." As Rose walks me through each track on album, it becomes clear that her craft is a way for her to manifest that internal summertime. Warmth and affirmations are interwoven between the insect noises and rattling trains that soundtrack her feelings of alienation. The first step to recovery is naming the problem, and for Rose, the expression of her loneliness is itself a salve for it. As many of us social distance from loved ones, the message of The Caretaker becomes urgently relevant: our most vulnerable moments can become our strongest.

I was conscious of the fact that "Going nowhere fast now" was the first line you hear on the record; it just came out stream-of-consciousness. "Cloud's Rest" sets the tone for The Caretaker being a record about slow growth, about taking time to recognize these restless feelings within us. The caretaker is in this state of restlessness, yet stagnant. It's the push and pull of wanting growth and transformation, but running on a treadmill. Running up a hill, trying to reach the top, and realizing there's no view. It's all ascent and no arrival. And isn't that what life is? All ascent and no arrival. So it's also about reminding myself that even when I'm frustrated with my body, be kind! Be kind, this is your one vessel.

This song is about watching the person you love go through a hard time, and wanting to be a source of strength for them. The word siren has multiple meanings — it's like an alarm crying through the night, the sirens of mythology beckoning sailors in. There's something sinister about it, but the verses are this outpouring of strength and confidence: "From this place of power / I will shield you from all harm." Even if you don't feel that strength for yourself, you want to be it for someone else. It's powerful. But then the bridge collapses into something more vulnerable: "Your pain is mine to know / Let me hold you / I say it again when your faith is lost / My love for you is iron." The verses are something you might say performatively, but the bridge collapses into this space of intimacy.

"Ordinary Talk" is a song that wrote itself. With Lavender there were so many heavy, big themes. I was watching my grandmother die and going through the 2016 election. There was an apocalypse. Approaching The Caretaker, I was like, what am I gonna write about? I've done all the big things. So I looked more closely at the details of our lives. It's those quiet moments of doing laundry and watching TV that hold so much of our humanity. And being in this place where I felt isolated and removed from the world, I was looking for those ordinary connections.

The song is a reassurance that feeling bad isn't something that needs to be corrected. I didn't really think about it, but this comes right after "Siren," where I'm telling my partner that I'm going to be strong for him. And here I am, flipping it like, No!Allow me to be in this place of turmoil! [Laughs] That's a little hypocritical. But isn't that what love is? You want to take care of your people, but you think you can handle your own shit.

I treated "My Best Self" like a character study. The pitch-shifted vocals on the track created a character. It's like I had my camera in the corner of someone's kitchen and I saw this domestic moment happen. It's a snapshot of this human interaction. This character wanted acceptance and recognition from their partner and wasn't getting it, but then realized, "I don't want to disappoint you but I have to live my life for me." That's where the chorus comes in: "Be the one you wanna be / see how you want to be seen." With the chanting of that chorus, it's a mantra for self-betterment.

It's those quiet moments of doing laundry and watching TV that hold so much of our humanity.

I wanted to write this song about friendship ending. I was experiencing that acutely, and I didn't have places to go to hear songs about it or read about it. I liked the idea of tracking the dissolution of a friendship over the course of a year, and using the seasons to show that passage of time. You're still on the porch remembering this moment in your life, but the seasons are changing. This is such a nostalgic song — it literally has the line "don't look back" because there's so much pain sometimes in looking back on our lives.

August is my favorite month — it's the month I got married in — but there's something somber about it. You're anticipating the end. You still have summer left, you still have this beautiful warmth and greenery. But the anticipation of it ending can take you out of that moment.

I wanted "Lapsing" to feel like the midpoint of the album. So much of this record is crafted, but "Lapsing" is just two synth sounds that I improvised. There's this sloppier quality to it, which felt important to me as a palate cleanser. I wanted to offer this gift of breath. It's the kind of track where you'd be driving and it'd soundtrack your thoughts. The first half of the record has been me telling you about my life, my story: now there's room for your thoughts to fill that space. "Lapsing" is also grounded in sounds of nature that root you in a place. It's got bug sounds, literally iPhone recordings from my backyard. It felt like an homage to where I live.

This song is a restless, pacing-around-internally song. I was on the porch one night last March. Zack [Levine] was on tour. The train went by and I heard the clacking of the wheels. And I started going te-kum-te-kum-te-kum, singing the beat of the train. [Laughs] So the train became a part of the song. Because I was so alone, I was looking for these interactions. And the verses with an off-putting alien vocal mirrored how I was feeling — which was off. So there's this weird little alien singing with me, and this weird train beat. To feel grounded and strong again, I let it blossom into this juicy pop chorus, something I wanted to sing along to. I was listening a lot to Robyn's Honey. I loved it so much, and her music also mixes pop warmth with these moments of alienation.

The blinking light changes throughout the song. In the beginning it's a firefly: I saw the first firefly of the season and it was like, Oh shit — summer's coming, but I'm not ready to be my best self yet. I felt fractured and weird. I wasn't ready yet to be in this place of goodness. And then the blinking light becomes an answering machine. Again, it was this signal calling out, Are you ready to connect? And I was like, No, not ready yet! Being our best self is not a magical pill you can take. It's not like a season can happen and you're there. Loving yourself, it's a lot of work. I've been on this journey for the past year or so of getting there. Going to yoga, therapy, going for walks; it takes a lot of consciousness and awareness.

Being our best self is not a magical pill you can take.

"Brace" is another explicit friendship song. I don't often have names in my songs. This is one of the only ones I've ever written with a name in it. The name has been changed, but it's just appealing to a really specific person. It's about someone going through a hard time and you not being able to be there for them. There's this image of a moth in the song, who is seeking a light, struggling to connect. Having those furry bodies beating themselves against the porch light is such a summer image. That kind of missed connection is painful, to be like, I'm here for you and you're not letting me in. And it's not anybody's fault! That's such a hard thing to grapple with. There's this real anguish watching someone struggle and being powerless to help.

I was about to turn 30, get married, change my name. The name and the line "Generation," came from a poem that my dad wrote me. The line goes "Sun rising in me appears, creation/ Song waking in you continues, generation." You can have that familial and marital connection but you're your own generation, in the sense of cohort and also in the sense of creation. After all this journeying on this record and the journeying of life, there's hopefully a kind of settling in this song. The strings come in and there's this sense of home. This song was such a reflection on ancestry and the stories that we take from our past. Names change, but there's still that thread of our history. This song felt like a nod, a recognition that those stories will continue.

There's this restless thread that goes through The Caretaker, but I like to end my records on a hopeful note. I never want my music to read as defeatist or depressing. This song is catharsis. The first track, "Cloud's Rest," is a shout seeking rest, seeking self-love; this final song says "Ready to rest/ I love you most/ I love you best" with the last lines. It's about reaching that place after the journey of the album. The song takes place in winter, but it's saying that even in the midst of winter, even when things are hard, you can cultivate that summer place inside of you. The general idea of The Caretaker is caring for the self, caring for others, caring for the land, and how those three things are inter-connected. In the arms of summer, in this place of loving myself, I am better able to love the world.