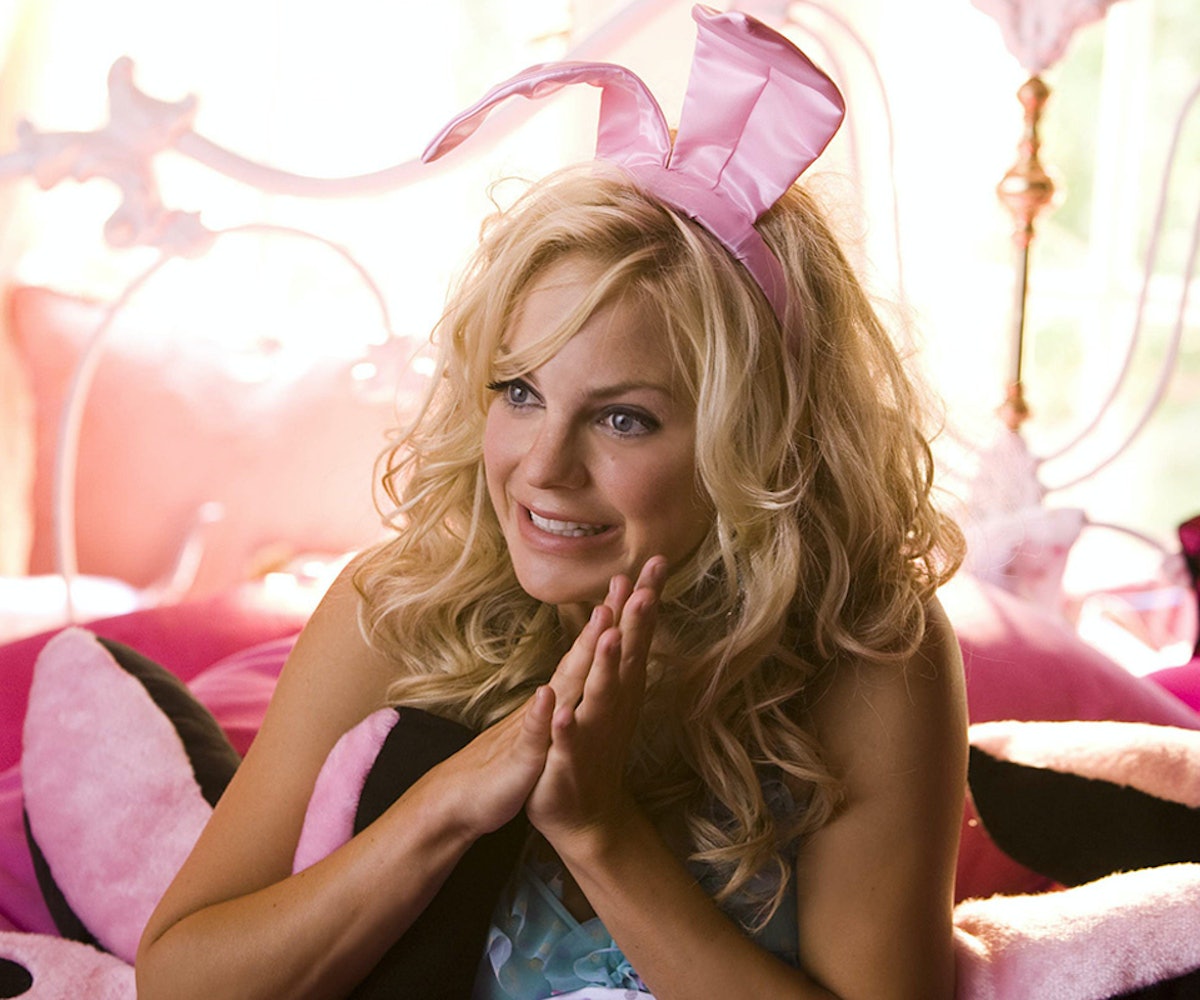 When I think of House Bunny, I think of the Exorcist-like grumble that Shelley Darlington (Anna Faris), a Playboy bunny who's been kicked out of the mansion, uses throughout the movie when she meets new people. Shelley repeats their names in a gremlin-like chant as a mnemonic device to commit those names to memory, slipping out of and back into her normal husky phone sex voice with the same ease that she probably slips out of and back into her too-tall-to-ever-be-comfortable heels, bedazzled bras and crop tops, and ultra-low rise mini skirts. (Hey, it was the early aughts, and that was ~fashion~.)

What's so memorable about this aspect of Shelley is that it represents all the different ways that she's made up of opposing traits; she is a realization of our own internalized misogyny, and easy to hate because of how much women are taught to hate themselves. Plus, she's hot and naive, and happens to have found success in a career that capitalizes on both of those things. But that doesn't mean she has it easy. Whether Shelley is surrounded by Playmates or socially awkward sorority girls, the women in each of her environments hate her: She's too popular and girly for the outcasts, and she's too nice and successful for her rival bunnies. House Bunny's writers, Kirsten Smith and Karen McCullah—the screenwriting duo behind 10 Things I Hate About You, Legally Blonde, and She's the Man—set up the dichotomy of hot versus not, popular versus geek, and let each side push the other to the opposite extreme.

The film was far from a critical darling, but that's hardly a surprise and wasn't necessary for the movie to win over my middle school self. When House Bunny came out, I was in sixth grade, and deeply entangled in the woes of burgeoning teenage girlhood. There was an underlying competitiveness to all my female friendships back, and it existed for a variety of reasons: Some of us realized we were queer but didn't know how to reckon that within our friendship space; some of us were trying to mold our own individual identities, while still wanting to fit in with the Hollister-wearing crowd; all of us were trying to live within this popularity hierarchy and maintain control over where we fell within it.

There was a similar hierarchical tension present in House Bunny, where Shelley felt like an outcast, even among the Zeta Alpha Zetas, the actual outcasts in the sorority where she was living and serving as house mother. The Zetas were played by actresses Emma Stone, Rumer Willis, Kat Dennings, and Katharine McPhee, all of whom were just beginning to garner buzz, and their acceptance of Shelley was begrudging; they only let her in because she promised to make them popular. Because despite their outcast status, popularity was what they craved as well; whether or not they fully admitted it to themselves or others, they just wanted to be liked and understood.

And in the end, because this is a feel-good movie, the Zetas all figured out how to become their best selves, taking a little of the self-love and care Shelley taught them and letting their inner selves shine through. Climaxes that involve this kind of self-acceptance often feel corny, but that doesn't mean they aren't important in the way they remind us to get past our misplaced pettiness and jealousy, and realize we are all struggling with the same things. House Bunny, in all its campy portrayals of femininity, showed me that women can really help each other find beauty in their insecurities. And that's a lesson I could have used in sixth grade, and can definitely still use today.