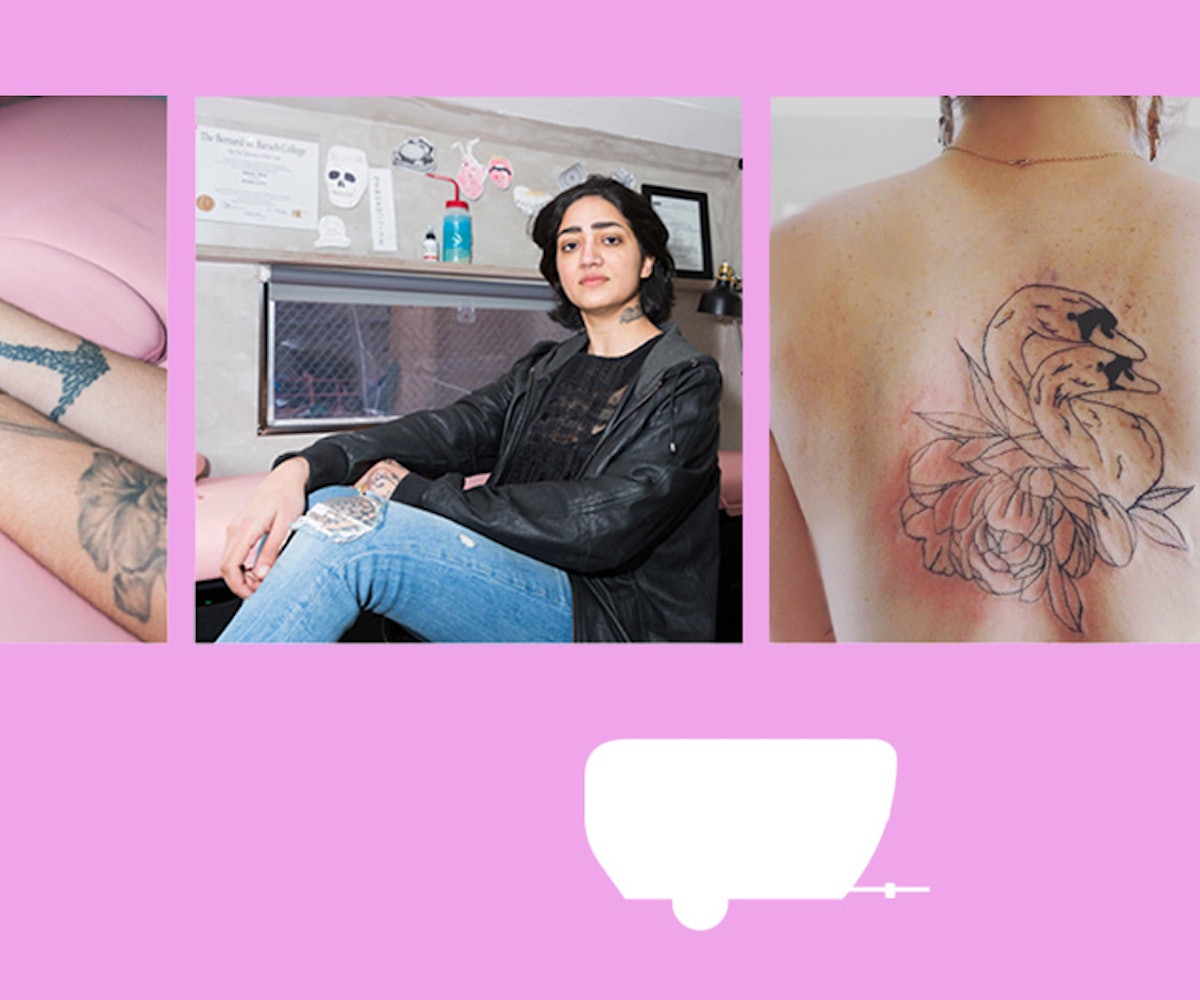 "I was always a rebellious child, so it's not too surprising the way I turned out," Shanzey Afzal tells me. It's been a year since we first met; she'd sneaked into a cocktail hour for a very millennial pink, very overpriced feminist networking event I'd volunteered to do social media for. Afzal walked around with a handmade sign offering free tattoo consultations, and we got to chatting over a botched ink job I'd received, and soon enough she was sharing what she hoped to turn her creative baby, Ink Minx, into—namely, a true safe space for all people to get tattoos. One year later and it's shaping to be everything Afzal had hoped for and more. "It's my childhood dream come true," she tells me.

As a first-generation American, of Pakistani and Indian origins, Afzal spent most of her early life abroad, getting her first taste of the tattoo world through practicing henna with her family. "In my culture, it's called mehndi. On my dad's side of my family, I was the youngest, so I would constantly have it done by other women, and do it for my mom's side of the family where I was the oldest."

Henna is an artform embedded with a strong, feminine energy that bonded her relatives together in tradition, but that also offered Afzal a point to pivot and create a new path for herself. "I'm one of the first women in my family to work," she pointed out, noting that her family was filled with "really strong, independent women," but also women who chose to raise families rather than pursue careers.

Afzal knew she was different though and set out to build a career for herself, first focusing on the music industry, before turning her passion for getting tattoos into work as a tattoo creator, and, eventually, leading to repurposing a '63 Shasta trailer into an incredibly Instagrammable, anchorless tattoo shop.

This trailer has become a safe space for clients who often find themselves alienated by traditional tattoo parlor culture. In part, this is because femininity and trust remain crucial to Afzal and her work with Ink Minx. But she also credits her religious upbringing, which, especially when paired with her deeply feminist beliefs, make her a unique figure in the tattoo industry. "It turns out, a lot of my clients don't come to me just for the feminist aspect, they come to me because they relate to my culture," Afzal said. "But that wasn't the original intention."

Jewish and Muslim women, women who are uncomfortable with the intimacy of getting a tattoo, anyone who yearns for an extra level of safety and privacy can find a rare comfort in Ink Minx.

"Part of having that small space," Afzal said, referring to her trailer, "is it really is just meant for two people. It's meant to not be an area where you have to be concerned about how you look or being cool in a tattoo shop." This positive draw came as a coincidence, along with her desire to pursue her dreams head-on. "I'm 26, and I wanted to really set an example for other young women," she said, noting that, in the future, she'd love to expand to a much larger trailer and accumulate a collective of artists working within the same core values.

"I just don't just want to sell myself. I really want to provide something," Afzal said. Her priority is not fame, but helping clients use tattoos as a method of healing. "I'm not the best tattoo artist," she said. "But I'm providing something that women really want, and I'm doing great tattoos for them." Her policy—originally women only, now women first—reflects her feminist intentions. Her male followers seem to understand that and champion it; a man donated a large tattoo to a female client of Afzal's choosing during a recent Kickstarter campaign.

The Kickstarter—which more than surpassed its goal—allowed Afzal to take her trailer on the road for the first time, as she embarks on a journey across the East Coast, tattooing at art fairs, towing her '63 Shasta along with her Jeep, complete with Ink Minx vanity plate. It's just the beginning for Afzal, but it's the start of a really exciting opportunity for all women to find entry into the world of tattooing.