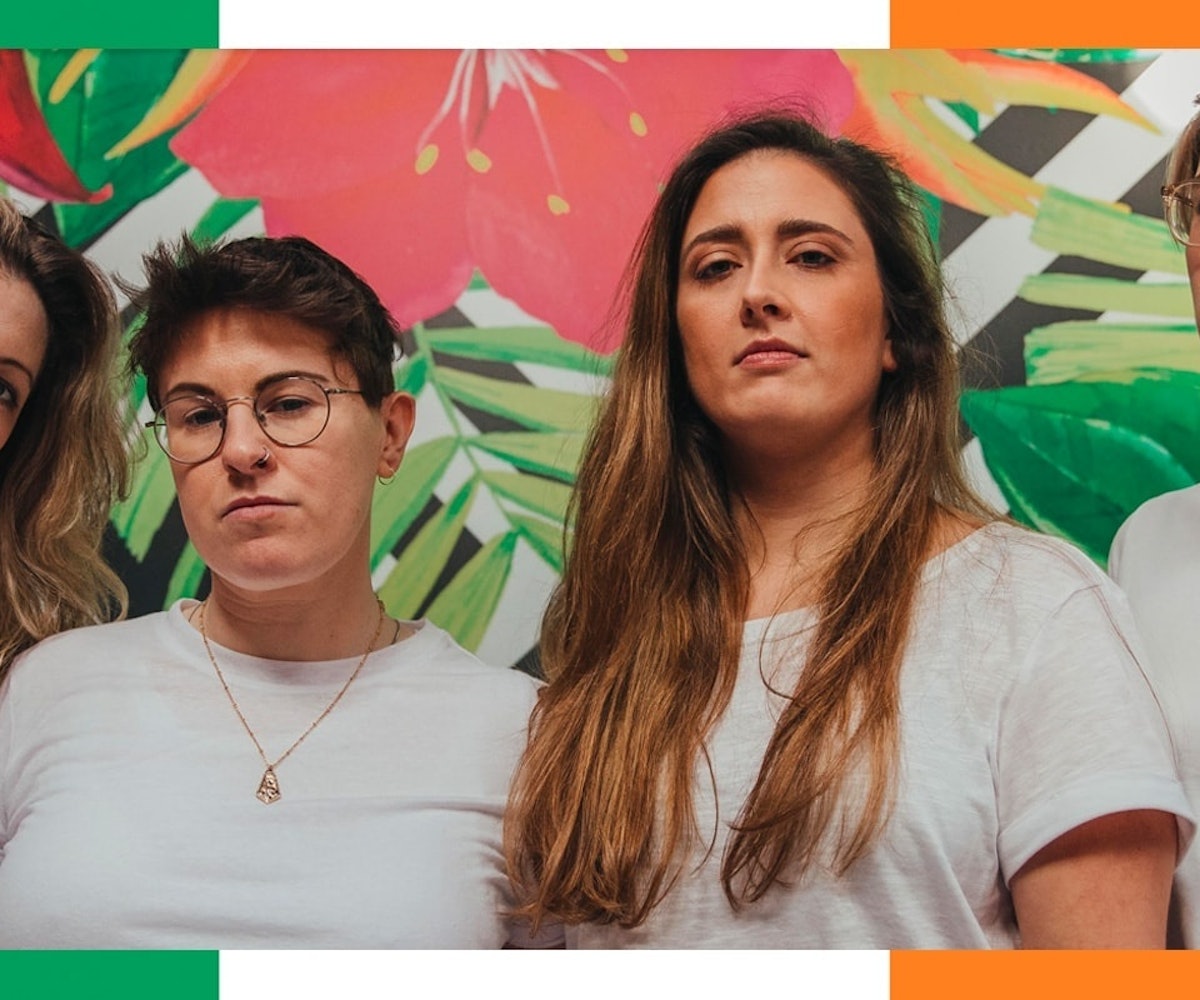 Music loves a scene. As much as we can get swept away with a breakthrough artist, there's something exciting about watching a whole cluster of bands coming up at the same time, pushing each other, making music that you feel couldn't come from anywhere else. Before the word "discovery" was appropriated by an algorithm, these scenes were how everyone shaped their tastes—one band leads to another, and all of a sudden, you're down the rabbit hole. What does a scene look like when bands can come together over a wider area, when influences can be gathered from a wider pool, and when putting music out into the world is easier than ever? For a good answer, look at Ireland.

Ireland already has a strong musical history going back a way, predominantly in rock and folk, and the intersection of the two. There's something of this combination in Dubliner band Pillow Queens, whose sharp, Weezer-ish guitar tunes are matched with gorgeous four-part harmony. "We have a lot of strange influences, we have all that emo, pop stuff that we have been listening to in our teens," says singer and dueling guitar and bass player Pamela Connolly, before the band's set at this year's Eurosonic Festival in Holland "but we also have the kind of, maybe, older music that we were growing up with, or that our parents were listening to, and strange bits of trad music. I feel like a bit of a sponge, music-wise."

A few years ago, a band like Pillow Queens may have been tempted to up sticks and move to London to "make it," but this route—one littered with the remnants of bands gone before—isn't as enticing as it once was. Pamela says, "The idea of moving out of the country to pursue this is terrifying to me. I definitely think to have Dublin or Ireland as a home would be best for us creatively and emotionally." Singer Sarah Corcoran adds, "You'd rather be a slightly larger fish in a small pond, than swim around. The scene is a lot better, it's improved tenfold from just a short time ago. There wasn't a structure there, there were bands being taken advantage of. Now, there's a proper scene where, if you put in the effort, you can jump on board."

Jim Byrne is more plugged into the Irish music scene than most, running independent record label Any Other City that put out music from people like James Vincent McMorrow and Villagers, with whom he also played for six years. One shift, he sees, is a move away from a short-term, smash-and-grab approach to the music industry, and toward leaving a legacy: "You need to make an impact greater than a couple of cool shows, or a couple of cool reviews or whatever. A lot of the younger bands are really focused on trying to make great records. There's not a huge deep pool of great records we've made as a country. A lot of the bands never got to the point to make that great record. I see a sensibility and intelligence of young musicians. They understand that buzz and live audiences can be fleeting, what they're really about is making great work that inspires other people." To that end, it feels like everyone is taking big swings. There's Dublin post-punk band Girl Band, with their onslaught of driving, cracked guitars and oblique, screamed-out lyrics that move between abstract and disturbing; Æ MAK, from the town of Dundalk, whose songs are somewhere between Vampire Weekend-esque pop and dreamy electronica, with a really distinct, composed visual style; and, Derry's SOAK, whose new single, "Knock Me Off My Feet," is a marked shift from her first record, and pretty much unavoidable on U.K. radio at the moment (and also, frankly, bangs).

Martha Ffion is actually no longer based in Ireland. She grew up in Warrenpoint, a small town on the island's eastern coast, not far away from the Northern Irish border, but moved to Glasgow for university in 2008, and has since become a fixture of the not-too-shabby-itself scene in Scotland. I meet her at Glasgow's Hug & Pint venue, where she's busy blowing up balloons for another band's album launch later that night, and despite her geographical distance from her home, the influence of it hasn't left: "I think that the way I write is rooted in Irish culture, but maybe more so in storytelling. My mum was really involved in the storytelling community, she isn't Irish but her identity is very Celtic, she got really into storytelling when she moved to Ireland, so we went to loads of storytelling festivals when we were kids, moving around the country. My brother writes music as well, so I think that influenced it. I guess it's all deeply buried in your subconscious isn't it, it's there, lurking."

Musically, Martha's 2018 record Sunday Best falls somewhere between early Rilo Kiley and Pulp, a collection of chamber-pop that's as good a debut from a songwriter as I can imagine. Her recent single, "Kennedy Hair," a subtle It's Always Sunny in Philadelphia reference, shows she's moving in the right direction. Its video—in which Martha suited up "American Pie"-style in front of the Stars and Stripes—is pointedly political, but rather than a didactic, up and at 'em protest song, it's an incisive bit of satire, poking fun at the pomposity and bombast of the leaders who deliver countries into tumultuous, uncertain futures. She sings: "Got a new national holiday, tell 'em go celebrate. Waiting on the parade," juxtaposing ceremony and nationalism with that feeling of inertia. She's working on a new record at the moment, which hopefully will see the light of day before the end of the year.

In their 2014 song "Cold Old Fire," Irish trad band Lankum sang: "Some songs were written to remind you: You weren't born to live and lie and die in embers of a cold old fire nobody remembers." It's a song of defiance, and of protest at the society that allowed Ireland to plunge into economic collapse. In this line, it's also a song about the power of music to galvanize people. Maybe it's no surprise then that Irish music is in such a great place right now. Strength in numbers helped the country come together to pass equal marriage laws and, most recently, take to the streets in huge numbers to repeal the eighth amendment, and grant abortion rights for women. Now, this same spirit is present and audible across the music. Turn it up, it sounds great.