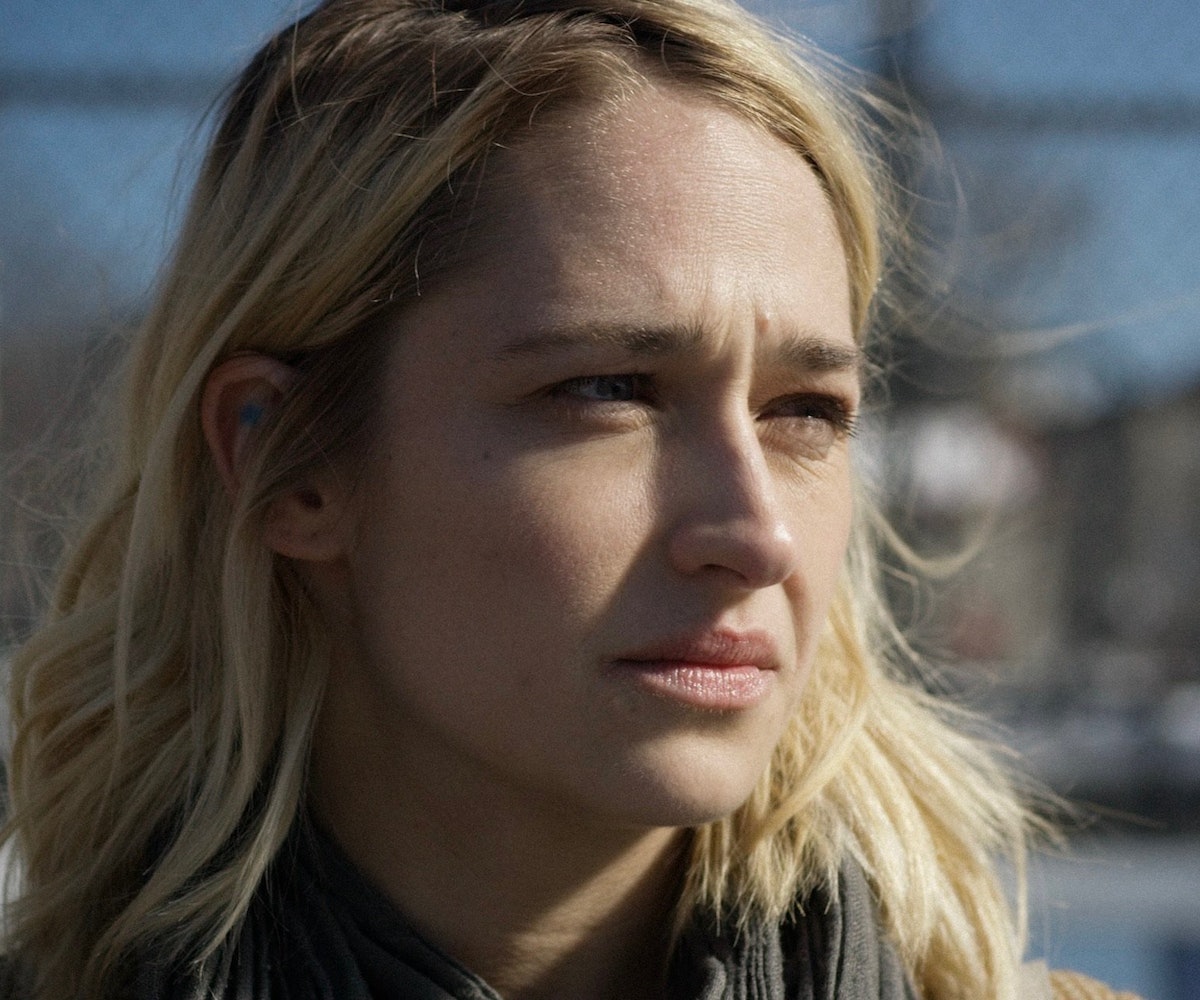 It isn't until almost the end of our conversation that I realize Jemima Kirke is driving herself through the not always easy to navigate streets of New York City while we're talking about her role in Melissa B. Miller Costanzo's new film, All These Small Moments. "Oh, fuck," Kirke says, explaining, "I'm driving in New York City. It's not fun."

Perhaps not, but her ability to carry on an in-depth conversation about love and desire, and the importance of subverting our conceptions of both things through art, was impressive, if not unexpected. In the course of her acting career, which started with a key role in Lena Dunham's debut film Tiny Furniture, and then notably continued as she played Jessa in Dunham's Girls, Kirke has often played archetypal dream girls, and just as often forced audiences to see the darker, more human sides of those fantasy creatures. (It's an even trickier path to navigate than New York City traffic, if you ask me.)

In All These Small Moments, Kirke once again plays with the idea of a dream girl, in the role of Odessa, a mysterious and melancholic, city bus-riding beauty who captures the eye of Howie (Brendan Meyer), a high school boy whose parents are going through a rough patch. Howie is infatuated with Odessa, and, as their lives start to intersect more and more, it becomes clear that Odessa, in turn, is, for complicated reasons of her own, drawn to Howie.

It's a role that could easily be two-dimensional, but Kirke plays it with a palpable tenderness, and it's a subtle and intimate look into what it means to love madly and deeply, if only for a little while. Below, I talk with Kirke about All These Small Moments, forbidden attractions, and what it means to be in love.

What was your initial draw to the role of Odessa and this project?

I like working with new artists. I love anything that's a little bit experimental, and, by experimental, I mean they don't have a lot of money or they don't have a lot of time or something like that. Or, it's a new director, new writer, something like that. And Melissa and I just really got along. And the other part of it was I was drawn to the storyline of the character that she wanted me to play, in that she was in love with a teenage boy. That was immediately interesting to me, and risky, in a political and social climate that would probably reject that kind of thing.

It's definitely a forbidden attraction. But of the things that I noticed most about this film was the way there was this kind of quiet radicalism surrounding the conversation of attraction, because you're never really allowed to say you're attracted to people who can't understand that attraction. Like, attraction always needs to be quantified to be understood. Why is this kind of unaccepted attraction important to see in art?

I'm interested in the subject of being in love, and I think that a lot of time we make that idea mean something very specific, and we try to define it by saying what isn't real love and what is real love. And, if someone's in love with someone and they'll tell a friend about it, the friend will assess the situation and say, "You're not really in love." And, in Odessa's situation, it's like [she'll be told], "You're not really in love with him, you're just transparent with your desires, you're seeing an ideal version of yourself in him," and whatever.

Well, I say, that is in love, and there are many different ways to be in love. Like, you can be in love with someone who you're just so wildly attracted to that you want to sleep with them. In love is just a kind of spell, and we're all vulnerable to it. We don't like to admit it, and then we use this terminology, and we're so sparing with it, because we think it means this heavy thing, but it's actually a very casual, normal, everyday thing that happens. Sometimes they last longer, sometimes it's more intense than others, but it's okay to use that in our everyday language more. And I think people really do relate to it, I think the words "in love" are just very taboo.

People seem to be really dismissive in love stories where they perceive an imbalance, particularly if they see an objectification at play, and you hear a lot of love stories that get derided as being crazy or unhinged, but I think what people actually see and are afraid of is an openness. And that usually is where the strangest accidents of love happen.

And also where we learn a lot about ourselves, through those relationships where there are imbalances. And there will always be imbalances. Sometimes they're not going to be the most concrete ones, or tangible ones, like an age difference; there might be an imbalance of intelligence with someone you're the same age as, or money, or wit, or just whatever it is. And those things, we end up learning a lot about ourselves through those relationships. I don't know really why our society frowns upon falling in love with someone who's outside of some random parameters. But what I like about Melissa's writing here is that it is sort of quiet—a quiet radicalism, did you use that word?

Yeah, I like that. I agree. With me, I like to take on those subjects with a little bit more aggression, and that doesn't mean it's a more effective way of doing things. While we were shooting this I was often thinking, Is this enough?This subject is so rich, are we doing enough? But I think [Melissa] did the exact right amount for people to listen and pay attention, rather than to simply just focus on the sort of shock of it. She infused it with just a touch of the shock value. And that's not an easy thing to do.

How did you make sure your character didn't just become a dream girl archetype? Was it difficult to imbue her with a kind of humanity, so that she wasn't just a trope?

It was difficult, actually, when you know sort of how you're being shot and when you're done with hair and makeup and the clothing—which is quite archetypal, it's like babysitter fancy—it is tough. What I had to do was specifically make myself, I had to level myself with the other character. I had to level myself with him and not think of myself as any older or wiser or anything than him, and the way I did that was just having to be wildly attracted to him... Oh, fuck, I'm driving in New York City. It's not fun.

Don't worry, I do it every day. So that was what grounded me in the character, was just staying as attracted to him as I would be if he were Benicio del Toro or something. Because that's what he is. And that's where the vulnerability comes from, wanting him. Because I wanted to be able... like, if you replaced his character and put anyone in there who would be more appropriate, you would get the same reaction from me.

I think that came across and gave different stakes to the story. What is it you see that really draws you to a specific part?

I don't know yet. I honestly don't have anything in mind, and I don't have a formula for what's going to turn me on in a role. It surprises me every time. When I'm interested in something, it's always so different from the last thing. What I'm looking for in the role is my reaction when I'm reading it. So I usually need good writing no matter what the role is, I guess what I'm saying is I don't know what I'm looking for till I see it. I don't even mind an archetype, even one that I'm sort of lumped in with. I don't mind those, as long as I can feel in the writing that there's room in it for more. Then I'll consider those roles. If not, if it's purely for the just sort of the effect of that type of person in the story, then I'm not interested.

All These Small Moments is in theaters now.