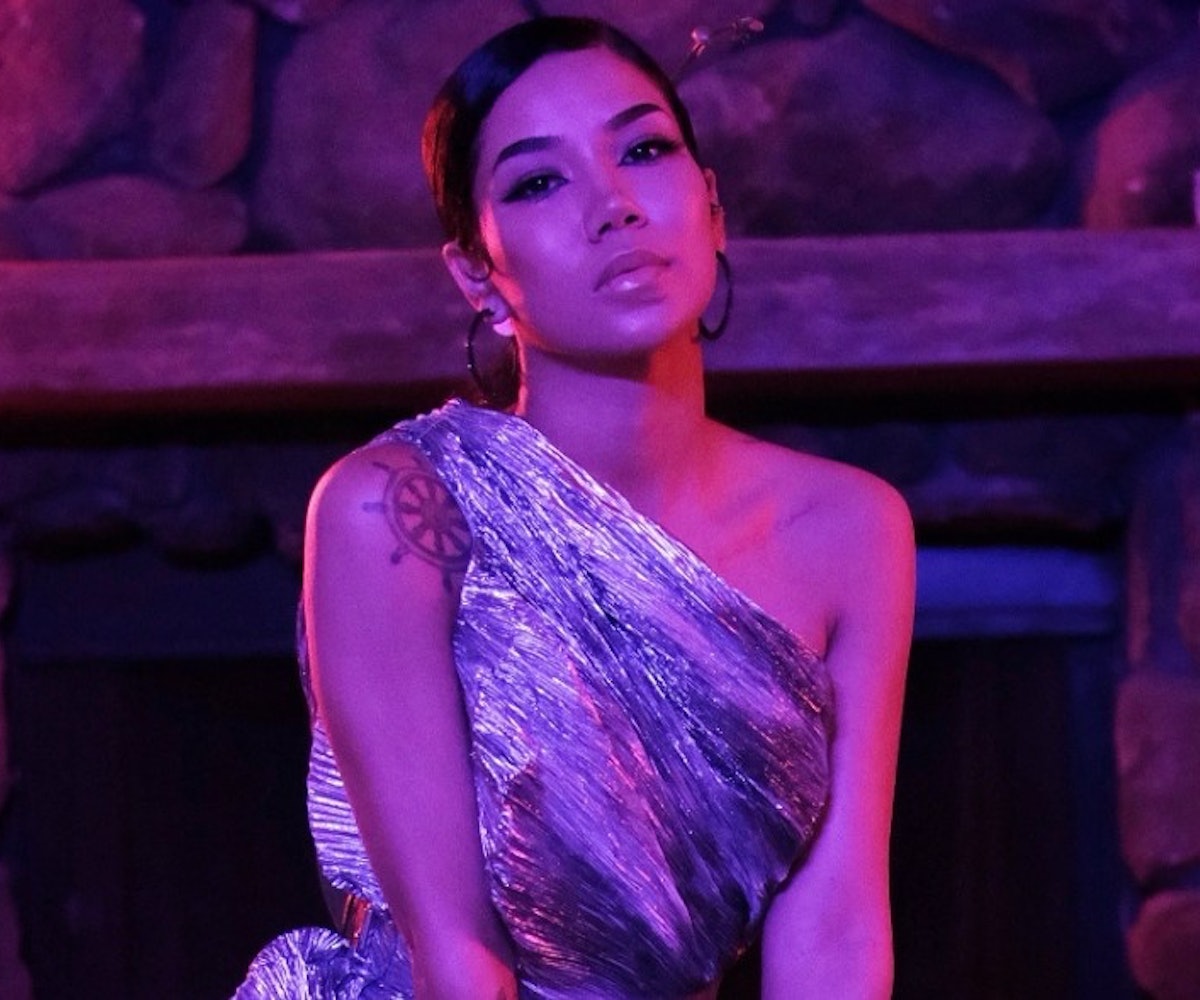 On a frigid January day in a nondescript studio in Manhattan's Soho, Jhené Aiko is calmly lighting a stick of incense. With her back turned to the room of journalists and industry insiders, the 31-year-old R&B singer dressed head-to-toe in a silvery spacesuit swivels around in her chair to face an intimidating spread of buttons, knobs, and screens; this afternoon she is the one manning the soundboard.

We are here to experience Chilombo, her latest record, out now, that's been in the works since 2017's Trip. As Aiko softly explains, she laid the foundation of the 56-minute project during a months-long stay on the Big Island of Hawaii — a pilgrimage made after Aiko discovered that one of her family members could trace their genealogy there. Every song began as a raw freestyle, and it was only after her return to Los Angeles she added polish to the tracks, recruiting an eclectic and robust roster of features: Future, Miguel, John Legend, H.E.R., and more.

Whereas Trip was Aiko's psychedelic meditation on death and coping, Chilombo finds Aiko taking a step forward as a more healed, and freed, being. "Triggered (freestyle)" flips the colloquially-used insult into a genuine and valid emotion: "You muhfuckin' right I'm triggered," she spits. And, of course, an Aiko album wouldn't be complete without its unabashed dispatches from the bedroom. "That print in them sweatpants got me weak off in my knees," goes an incredible line from "Happiness Over Everything (H.O.E.)" which fittingly features Miguel and Future.

But the general sense one gets bobbing through Chilombo's expansive, lo-fi-saturated waters, is that Aiko has finally reached the shores of some kind of equilibrium. As she chants on the penultimate track, "It ain't perfect, but everything's beautiful," the song petering off into twinkling bells. One wonders if her journey to this point could be traced to her use of singing bowls, the ringing therapeutic instruments that line the undercurrent of the album, and that she's started to include in her live performances.

Aiko plays the bowls under every song on Chilombo, most often a single note in the background that coordinates with a certain chakra. "PU$Y Fairy (OTW)," for example, is in the note of D, which stimulates the sacral chakra, so when one listens, "it's activating your…balls and your ovaries," Aiko explains, laughing.

Below, Aiko discusses how singing bowls occupy Chilombo, how sound therapy has helped her heal, and how she feels about the internet constantly speculating about her and Big Sean.

What was your journey towards finding sound therapy?

My father is a doctor, he's a pediatrician. He used to be strictly about science, and then as he got older, he would take us to the ... I don't know what kind of stores you call them, but they would have incense and Tibetan flags and stuff like that. I remember getting a Tibetan bowl and being like, Oh my god what is this? I thought it was beautiful. The guy in the store was like, "It's kind of hard for some people to play..." I picked it up and I played it perfectly. I bought one, and I would just use it for myself, 'cause I liked how it felt, to actually play it, and I love the sound.

As life progressed and I was going through more things, at one point I was given a mood stabilizer by a doctor for mood swings. I took it twice and I felt like it wasn't helping. I just have mood swings, that doesn't mean something's wrong with me. I then discovered these crystal bowls. My friend Chrissy sent me a picture and they weren't the regular white crystal bowls. They were all these different colors, like iridescent, and some of them were blue and green and red. I found a retailer in Hawaii, where I was recording at the time, and I was like, "I have to get some of these bowls." I flew to Kauai where they were, I bought like four bowls, we recorded them and I was like, "Oh my god I love this." Then I found someone in L.A., and she ended up becoming my sound healing mentor and really teaching me.

During making the album, I was reading a book called Sacred Sounds that just explains how the different sounds and different vowels resonate with your chakra system. I was so interested in incorporating that into my music. Even while I was doing Trip this was something I was studying. But I started getting into the bowls after Trip. For this album, I really wanted to put that intention into the music and really have it be this real thing that you can listen to. If you're listening to a relationship song or a song about missing someone or a song about love, I put a bowl or multiple bowls on these tracks that actually embody that message and that feeling.

I think with Trip, I was talking a lot about my experience with self-medicating. And with this album I basically have been sober, with the exception of some drink when I have gone to a club, which I hardly ever do, and maybe a joint here and there. And I don't condemn anyone who smokes or drinks, cause I believe in the healing properties of marijuana and in psilocybin mushrooms, in moderation. I'll be 32 in March, and I just like the feeling of having a clear mind that's not under the influence of anything. It's interesting because when I play the bowls, it gives me that same feeling of euphoria, but I'm in control. It doesn't feel like I'm being led by a substance. It feels pure.

Psychedelics and sound bowls, those two methods of healing are different — but do you think they can work together?

I think they can coexist for sure. I actually just watched the Goop thing on Netflix, and they did psilocybin therapy, which is basically microdosing with a therapist in a group setting. That's how I tried when I did magic mushrooms: I would microdose. It wasn't like I wanna hallucinate, it really helped me come out of a deep depression, and it doesn't have any addictive properties. So it was something I had an experience with and I feel like I'm in a different, more appreciative place because of that experience. I look at trees different, I look at other people different. And I think yeah, if you work with professionals in that field, in a setting that is controlled, medical professionals and sound healing professionals, I think that would be really cool to see them work together, for sure. I also think that with sound baths and sound healing experiences, a lot of people say that it felt like they were high, almost. It's cool to experience it just purely in that way. I think songs on this album, they have the bowls in them sort of as an introduction to the sound healing because a lot of the songs are not sound healing songs, but they have that sound healing element that you may or may not pick up on. But it's there.

What are some stresses that you deal with?

I have a lot. I'm a mom, I have an 11-year-old, which can be very stressful. Just the anxiety of her at school, she has her own phone, I don't know who she's texting all the time. It's a lot of not knowing what's going on with her, not having control like I did when she was a baby, where I could hold her all day and she could be with me all day. As I got older I started having more anxiety, and it might have been because of becoming more aware and not drinking or smoking, or taking pills all the time. I've gotten a lot better because I've been working on techniques to keep myself calm and all that, but just anxiety, performance anxiety, social anxiety, all types of anxiety. Sometimes when I am not practicing how I'm supposed to, I'll just stay at home and be sort of frozen. But that's a part of my practice, I guess, when I feel overwhelmed is to just stay still. And whenever you lose someone that's really close to you, how I lost my brother, sometimes that will just hit me out of nowhere, and it'll be like depression for a few days. It'll just come out of nowhere. Like I said, for me, all the holistic types of therapies, sound therapy, meditation, all of those, the side effects are not going to kill me. So I found it a lot more beneficial.

You have Big Sean featured on this record again. How would you define your relationship nowadays?

Me and Sean, it's been the same since we met, honestly. Me and Sean are like... we've known each other for multiple lifetimes. In every lifetime we've been something different to each other, and I think in this lifetime it's all of that at once. It's funny because sometimes I'll be like, "You feel like my brother that I fight with, but then you feel like someone I'm attracted to, but then you feel like my cat." It's a dynamic, dynamic. He'll always be one of my best friends.

With the internet constantly speculating on your love life, does going on social media flare up any anxiety? Do you restrict your phone or internet use?

Yeah I do. I do internet cleanses ... detox. I just got off of one a few months ago. We're all human, and no matter what anyone says, like, I don't care what anyone thinks of me, if you're paying too much attention you're gonna be like, What do you mean you don't like my hair? But I always have to remember that these people on the internet are strangers. A lot of the people that are super engaged are in middle school. A lot of the people that are tweeting at you all day every day and coming up with the story behind why this picture was taken, and coming up with all these conspiracies, it's like they're bored, they don't have anything else to do. What I put on Instagram or even the songs that I put out, that's a very small piece of my whole being and my whole story, so things about my relationships or my personality, there's no way that these strangers can get the full grasp of it based on social media. Sometimes it's amusing when I see the stories they create. When I was younger I felt the need to explain myself and tell the full thing, but people are going to create. And I think that's great, I love people being creative and coming up with stories. I just wish people would apply that to maybe write novels, or do something more productive than gossip.