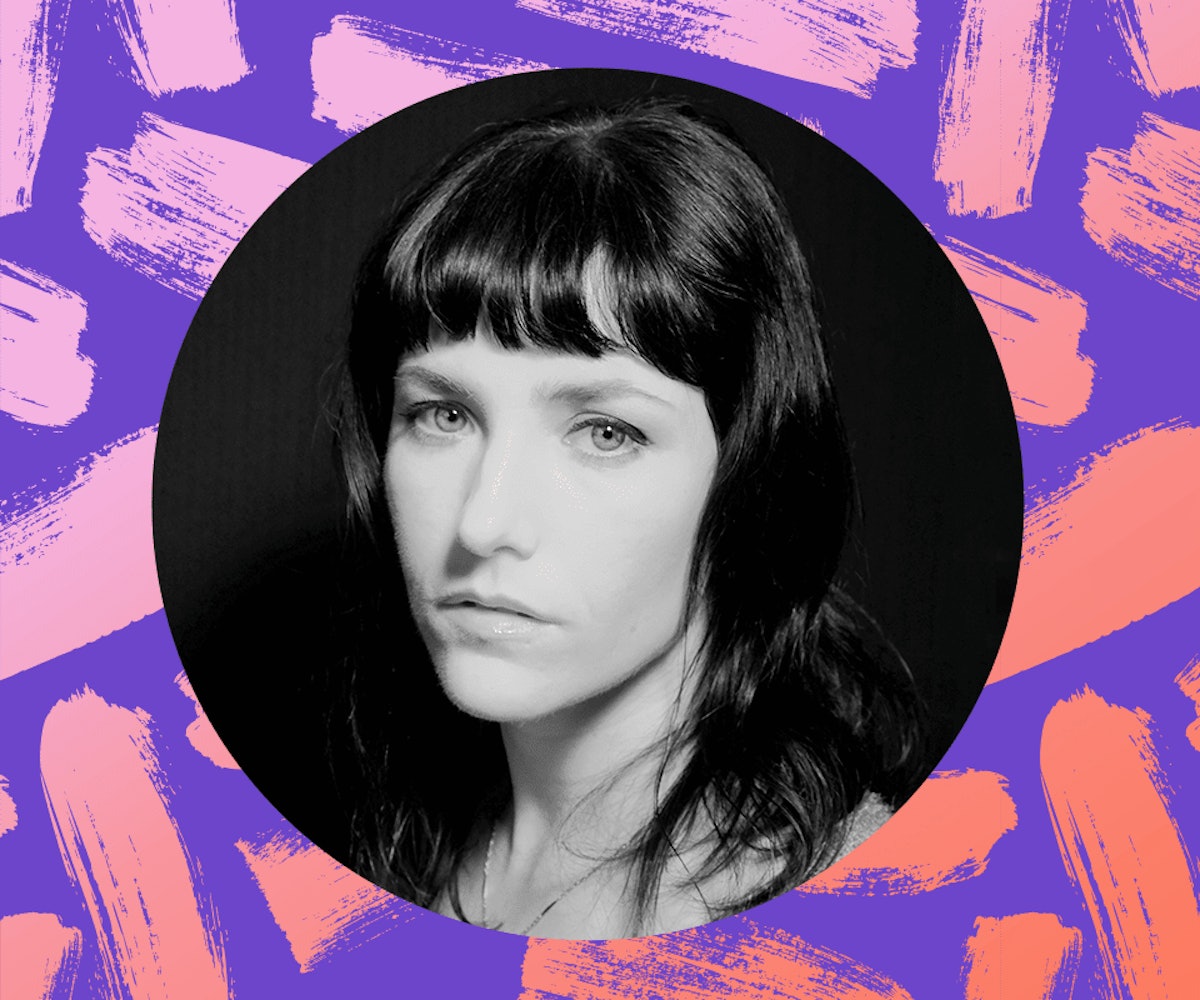 "I have a bad memory when it comes to facts," Juliet Escoria told me over coffee in a small corner cafe in Brooklyn, where we'd met to talk about her new novel, Juliet the Maniac. "But," she continued, "when it comes to how things felt... my memory is much more sensory. I have no idea what movie I saw last week, but I can tell you what it felt like. That's how I remember things."

Escoria was explaining to me how she was able to write so lucidly in her novel about ephemeral experiences: the vibrational dissonance of mental illness, the rapidly cycling visual oddities that accompany drug trips, the heated intimacy of close friendships. These are the kind of topics that are all too often written about in ways that are heavy-handed, riddled with clichés. But, in Juliet the Maniac, Escoria grapples with these heightened states with a style that is at once both delicate and visceral; her words have a pulse, her sentences spring to life, her story is made real.

Juliet the Maniac is fiction, but it recounts a story very close to Escoria's own; it's told in snapshots, a series of short chapters with biting titles, and traces its main character's experience as an adolescent who deals with addiction, mental illness, and self-harm. I read the book in one big, searing gulp; it has a fierce magnetism not dissimilar than of the wildest girl you knew in high school. And, indeed, in this book, Escoria tells the story of that wild girl, the one who usually disappears from the page, the one whose story gets forgotten. Escoria used some of her own life story to charge that of the fictive Juliet, and it feels like an act of the utmost generosity, a donation of personal experience in the service of reminding readers that there is no one truth about addiction, about mental illness, about self-harm, about wild girls. All of these stories exist together, they're part of a larger shared experience and exist on a continuum of need and longing and pain and love.

But then also, Juliet the Maniac is more than just its beautiful writing; it is a reminder of the complexities inherent to dealing with mental illness and addiction—whether you are the one afflicted, or whether it's your loved one. It's a reminder of how our knowledge of a diagnosis sometimes gets in the way of our compassion for those who grapple with a disease.

Below, Escoria and I talk about the literature that surrounds addiction and mental illness, what it's like to fictionalize aspects of your own life, and why addiction stories don't have to have a bad guy.

There are a lot of books—whether novels, memoirs, or autofiction—that cover mental illness and addiction. What was important to you about adding to that genre and tradition?

I feel like no matter what you write, it's going to have been done before. So like, worrying about it in that way doesn't make sense. I just hadn't read anything that felt true to me in all regards. I wanted to avoid explaining or too much reflection, because when you're 15, 16, 17, experiencing severe mental illness, you feel like you have no map at all or any understanding, and I wanted it to reflect the bewilderment that I felt. I didn't want to explain or say what it meant to me too much. I felt like if I explained it too much, it wouldn't be accurate.

It's really mind-blowing to think from the perspective of being an adult and thinking about what it is to actually be 15, 16 and experiencing these problems and situations. It's not even that when you're 30, you can handle them so much better, but when you think about how much your brain was still forming and how it's such a wild thing to make such life-altering decisions at that point in your life. Did writing this give you a new perspective on what it meant to be that age, and dealing with things like addiction and mental health?

It felt masochistic to write about it at all, because that's definitely the time of my life that I have the most difficulty viewing myself in an accurate way. I realized that I had no sympathy for the teenage version of myself, which is really weird, to have gone through all of this therapy and 12-step work and still be like, God, I really fucked up, I should have done things differently, what was I thinking? So, I did some therapy explicitly on my teenage self, and that helped me. I think the fictionalizing did help in terms of creating a person that's not me but is like me; I was able to view them more objectively. Like most writers, I don't like the idea of [writing as] catharsis, but there's something cathartic about it, and I feel as though acting as though there is not, is not entirely accurate. [But] I do think that can diminish the work as self-serving when it's not.

One thing that stuck out to me while reading is how little we really know about what's effective for individual people, and how sometimes treatment can feel like we're just throwing ideas at a wall and seeing what sticks. We know a lot, but we don't understand everything. When you were writing, were you at any point overwhelmed at how much there is that is known but not really understood?

I've had a lot of rage at the pharmaceutical industry, and of course at psychiatrists. Money is a factor, but I do feel that a lot of the doctors that I've seen did have good intentions. They didn't have good methods, maybe, but the intentions were there. I do think it's really interesting where we've come since I was originally diagnosed in terms of what we know now that we didn't know that long ago. And then how little they still know. I think the '90s were an odd time, because you had relatively new drugs, and I feel like the doctors were overprescribing things; that seemed important to talk about, the overzealousness of prescribing things.

That's the thing that is so difficult to reconcile with the treatment of children, I think, is those doctors' willingness to experiment.

I felt like a guinea pig, and I felt like the people that I knew were my age, going through similar stuff, were guinea pigs, too... I attempted suicide multiple times, probably due to antidepressants.

It's infuriating to think about the ways lives were being risked to make money, and just to see what would happen.

The medication combination that I'm on right now is really effective, but they don't know what it's going to be like for someone to be on it for decades, which is eventually going to be the case. I guess I'm still being guinea-pigged, but it works.

You're not 16, though, and you're making your own choices. There's the element of the book that made me question what it is that adults are willing to do to not have to worry about kids.

One of my friends, her son is a teenager and has experienced depression, and it's just like, what is the right thing to do? It's so difficult to find the right thing. One thing I wanted to avoid was the parents being a bad force. My parents were ill-equipped to deal with it, because all parents are, but they really did their best. I wanted the parents in the book to have a similar thing. Were they fantastic at dealing with their mentally ill teen? No. But did they try? Yes.

I think that really comes across, and that it's really important to show the mistakes that parents made. It's okay not to valorize or demonize them, because there doesn't have to be a bad guy. It's never that simple. There are no easy binaries. Which, a binary that is a really familiar one in fiction is that of female best friends: the tame one and the wild one. It speaks to a kind of intense female bonding that can feel like its own kind of addiction. This novel deals with that kind of attraction and intimacy, but makes clear that it's not just about the people in it, but the magic of the bond itself; what drew you to explore that type of fluid, intense relationship?

That was a huge part of my life as a teenager, my best friend at the time. I wanted the interchangeability of that, because I've seen lots of books that had the creepy intimacy, but not the interchangeability. That was important to me to get across, how quickly and easily someone can be replaced in life. A sort of identical function.

It's great that the stable element of the book—Juliet—is an inherently unstable character.

The pitch for the book… I had read Marlena and Girls on Fire and stuff like that. I was like, Oh, my book is like that, but my character is the one who's doing the thing.

Juliet the Maniac is available for purchase, here.