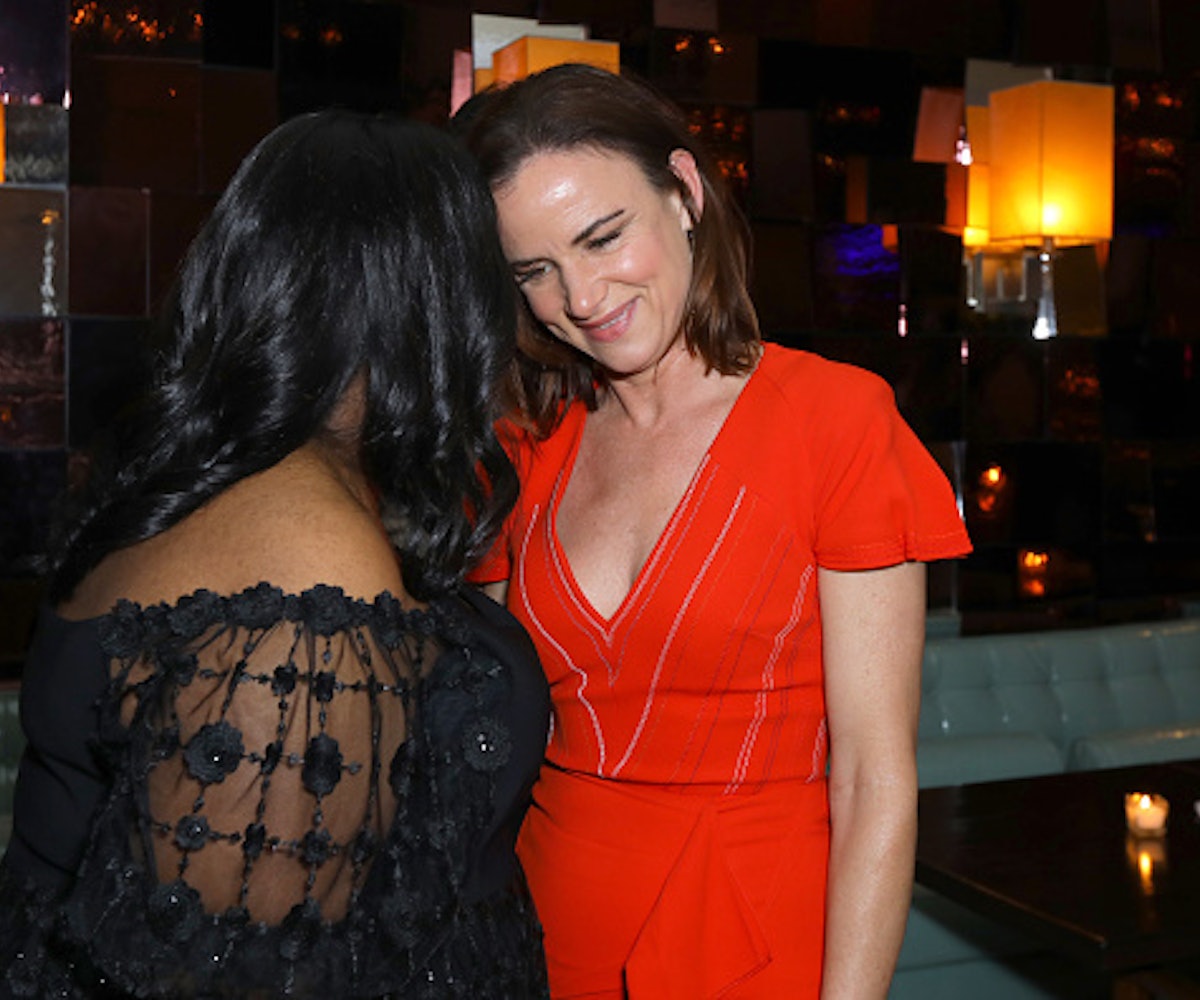 Playing a mother in a horror film is usually one of two things: You're either the villain, or you're a cipher—the kind of thankless throwaway figure who's rarely seen and whose impact is imperceptible. But in Ma, the Octavia Spencer-led horror film out this Friday, there are two mother figures, neither of whom are exactly what you've seen before. First, there's the titular Ma, played by Spencer, who is indeed a villain, but a very particular kind of villain, one who subverts just about every aspect of the mother archetype you can imagine. Not only does Ma willingly buy alcohol for a group of teenagers, but she allows—actually encourages—them to party at her house, and text bombs and FaceTimes them at will.

And then there's Ma's other mother, Erica, played by Juliette Lewis. If you know anything about the roles Lewis has played throughout her career, you know better than to expect that her latest is anything resembling a stereotype. Lewis—who rose to fame 30 years ago, with roles in cultishly adored films like What's Eating Gilbert Grape?, Natural Born Killers, and Strange Days, with one of her first prominent roles being the teenage daughter in Martin Scorsese's remake of the classic thriller, Cape Fear—has built one of the most interesting, wide-ranging careers of any actress working today, and she adds to that with Ma. As Erica, Lewis offers a glimpse of a different kind of horror movie mother, one who has a life of her own but is still present in that of her teenage daughter; one who is imperfect, but who is trying to be the best she can. Of course, none of her good intentions fully protect Erica, or her daughter, but they do make for a fascinating study of a woman who is trying her best, and failing to protect that which she holds most dear.

Recently, I spoke with Lewis over the phone about Ma, what it was like coming of age in Hollywood, and whether or not she'd buy teens booze.

How did you get involved with this movie? And what was so interesting about this character for you?

I knew of [director] Tate Taylor from The Help. And the first thing I always look for [in a movie] is who's directing it, and then the script, which was so fresh and strange and unpredictable. I liked that this mom role reminded me of my friends. Erica really had that lioness strength, yet she's friends with her daughter and navigating how to discipline and grow a healthy young adult. And it's all very real.

Within horror movies, parents are often represented as ciphers, like they never had a life of their own. But with Erica, you understand who she is and you understand her choices.

Yes! That's what I felt, and that's the power of a great director and writer. It reminded me of my friends who are raising teenagers, who are really good, and who are trying to keep open communication, but you're also navigating scary waters.

There's a lot of really scary stuff to navigate: bullying, peer pressure, and, you know, random adults buying your kids alcohol. But, of course, all that stuff always existed.

I grew up, and I think everybody does, knowing about the sketchy adult figure who's willing to buy booze for kids, so I like that it's showing that that kind of shaky morality isn't cool—although for a kid it might be cool for a second, like, "Someone's going to break the rules for me!"

A lot of Ma deals with the uneasy tension of adults not knowing what their relationship is to their younger selves; they want to maintain their openness and their coolness with their kids, and sometimes sacrifice their authority because of that. It's hard to balance, and it can be hard to really grow up. Since you've been acting for most of your life, though, you've long had the experience of being young, but around veteran actors, and now the roles are reversed. How has that been for you?

It is interesting. Like, I'm where Jessica Lange was when I did Cape Fear. I was, I think, 18, and Jessica was maybe 40, then. Now, I'm in my 40s, and I loved Diana Silvers who plays my daughter. That was an effortless, organic relationship. She's such a unique personality and so lovely and warm, and so I want to protect that, I want to nurture that in a young person, and in show business. You don't want someone to lose their sense of self or priorities, and so it is interesting being in a different position of responsibility. But also not leaning in too heavily to that authority, because I'm still like, I don't know how I'm going to make it sometimes from day to day. [laughs]

I feel like that's the big secret that everyone realizes once they reach 35 or something: There's not some switch that flips, and you suddenly gain access to all the knowledge of the adult world. You're still the same person. It's not like you suddenly can be someone other than who you were a year before.

No! And the biggest thing is, and I don't want to be cynical, but it doesn't get better. No, it gets different. You're not going to obsess for a weekend about your outfit like I did in junior high, but you're going to think about how you're going to take care of your parents in their old age. It's just scary. It's different. Life's nuts.

Your career has been so rich in that it's so representative of creative evolution, but despite all that change, you're still yourself within the whole madness of it all.

Still yourself, and you hope to evolve! For me, all I want is what I always wanted: storytelling and complex characters. And, thank god, I didn't build a career on being a sex symbol, because that would have had horrible repercussions for me, I think. So for me, it was always character work; I always relished exploring different personalities, people different from myself, and exploring their emotional tapestry. What people conceal and reveal is always fascinating in life and in stories. But I will say, even now, later you're sometimes competing with your earlier successes. It's sort of like musicians who are asked to play their hits, like, you want to play the new music. Every artist is kind of competing [with these past versions of themselves]; you can get stuck looking back, instead of looking forward.

It can be intimidating to have that legacy. What sort of things scare you?

In another way, what I find fascinating and can be scary... I was in a hotel recently, and there was a marathon of a paranormal something-or-other show on TV, and they were real-life ghost stories from paramedics and cops—from people who'd be cynical about ghost unrest or whatever. And that stuff, like an evil, just evil energy, is so fascinating to me. We've all had that in life, when we meet a person with a bad vibe. Like, what is that bad vibe? So, just people with that energy. Sometimes it's scary, but I tend to approach that with curiosity.

And then, horror movies, I'm more attached to psychological thrillers, where it's the element of real life. Or even when they're based on a true story. I'm into those things. And The Shining. And I liked Ma because it reminded me of Carrie and the bullying with the kids and what drove her vengeance.

There are so many different ways in which Ma is terrifying. There's no one who's safe around her, honestly.

And one of the scariest things about her—and you wouldn't expect it—is her manipulation.

So after this, if any teenagers ask you to buy them alcohol, what's your stance on that?

[Laughs] This is hilarious. I am so prudent. This is a great irony because I have lived on the edge; I've been in dangerous situations as a young person; I would not ever facilitate that kind of danger for somebody else. I want to protect people, nurture their voice and their reasoning capabilities to look at consequences. So, no. I'm not the booze supplier. I was in a rock and roll band for six years, and even then I'd see people on acid—on every different substance—and I'm the person offering them water. Like, here, drink a lot of water on your trip.