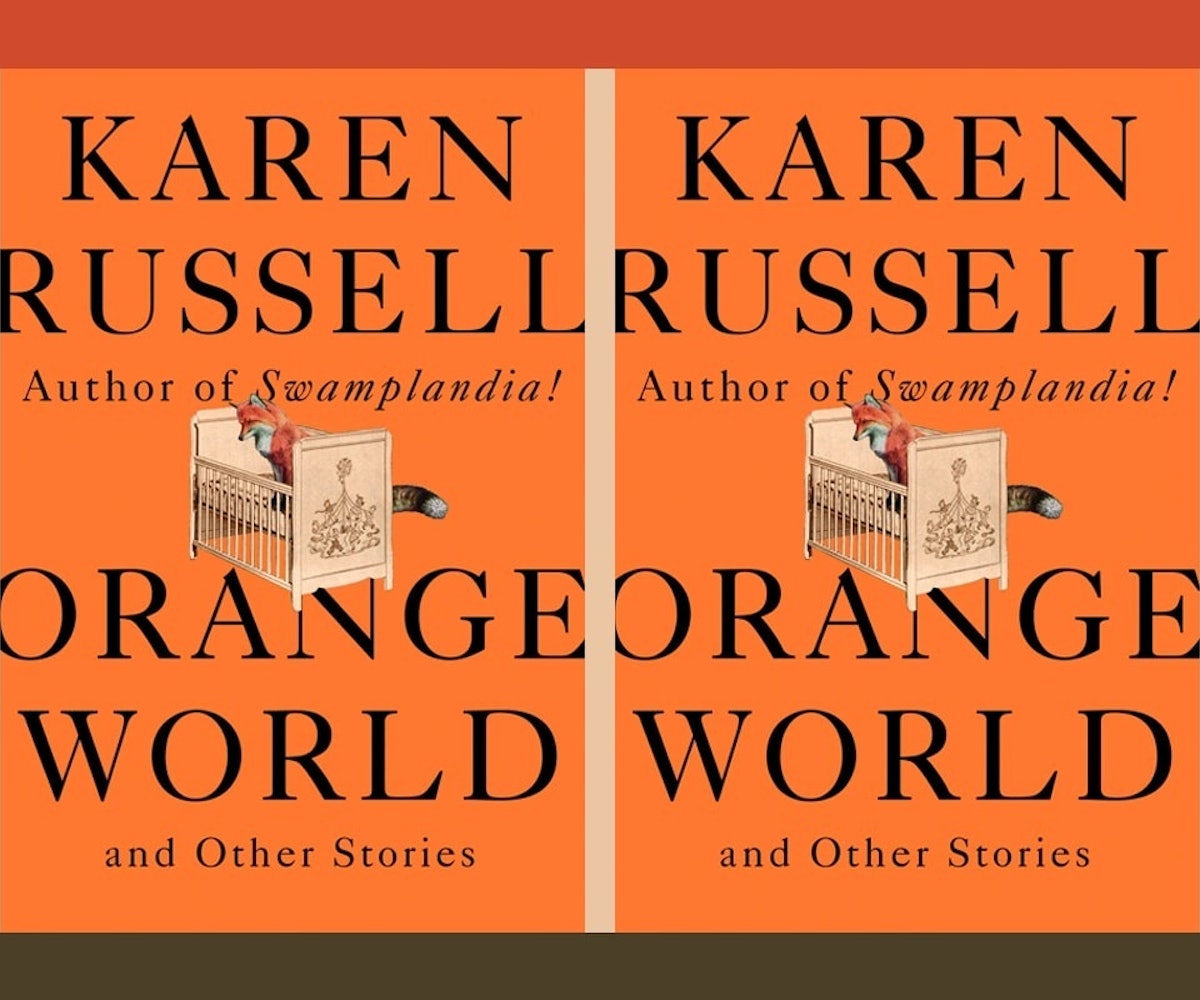 "Who would come here? Who would live here? What kind of desires could flourish in a place like this?" These are the questions Karen Russell, author of the new short story collection Orange World and Other Stories, tells me she asks herself when she's thinking about a new story, figuring out its setting, determining how its environment affects its characters. Russell is a writer whose often surreal, always sublime—but, sublime in the sense of a lightning storm in the middle of a never-ending desert—work feels designed to unsettle, and to subvert any sense of comfort we have, and idea that we know where we are in this world. Russell does this by having her characters push against known boundaries and explore new frontiers. Those frontiers are sometimes literal, as in the first story in this collection, "The Prospectors," in which two young women in the 1930s go to gold-rush Oregon to try and earn their fortunes; and they're sometimes figurative, as in that same story, when the women wind up at a party populated by men who've recently died in an avalanche. Then, too, Russell explores those times when we feel not like our environments are alien, but rather like we are the aliens; in the book's titular story, "Orange World," Russell writes about a particularly amorphous state of being: new motherhood, also a time when it's possible to feel like a pioneer, even when knowing how many people before you have walked the same, well-trod path.

But perhaps what Russell does best of all is ask us to question our drive to explore, to live out some sort of twisted manifest destiny, to satisfy our own ego-driven desires, even if it costs us our safety, or at least our sense of it. There's a beautiful perversion to our collective need to disorient ourselves in order to find ourselves, and nobody captures that better than Russell.

Recently, I spoke with her over the phone, and we talked about the appeal of short stories, her interest in frontiers, and the fine line between literature and a Saturday Night Live sketch.

How do you start a story? What is your process for knowing when an idea is going to become something more?

I'm always interested in what other authors tend to say because I'm hopeful somebody else has a less demented method [laughs]. I think I'm embarrassingly bad, for somebody who's been trying to do this for a while now, at knowing if the kernel of a story is something that I can make live on paper. And I feel like I spend quite a bit of time on drafts that never really get off the tarmac. And it sort of feels like sitting in a plane with no engine and getting everything in the plane set up and then having this quiet that shows it's just not the right vehicle to explore something that's a genuine question. And that's usually what it ends up being.

I really start with setting a lot of the time, so to this story and this collection about Joshua Tree National Park, and I had never been to the desert, and I went there, and I just was agog [laugh]. It felt like there were magnets under the earth or something. It was such a spooky and marvelous place and so foreign to me. It really felt like the surface of Mars or something.

So, sometimes it'll be a place, but then that sort of generates questions about, "Well, who would come here? Who would live here? What kind of desires could flourish in a place like this? What desires would be really poorly matched to this particular setting?" And a lot of times, if it works at all, then sort of the geography will shape the plot in this way where the exigencies of a particular place and time.

But I have lots of ideas that always sound really bad, actually, in paraphrase [laughs]. They always sound pretty dumb. My sister was saying they sound sort of like bad Saturday Night Live sketches or something, and that's always been a cue my whole career. I was like: "What would happen if the daughters of werewolves were re-educated by nuns?" And everyone's like: "There's something wrong with that" [laughs] They never sound too promising in the idea stage.

So many of your stories are so rooted in their environment, and so many of those environments are sort of frontier environments, places where people feel like pioneers. Maybe in some ways, they are actual pioneers going to chase after the Gold Rush or sometimes it's people who are out in Joshua Tree—which I've also been there, and it is such an alien and strange place where you just inherently feel kind of like a pioneer...

Like a trespasser a little too, right? You just don't belong there, and so it takes a special kind of person to willfully ignore the signs. [laughs]

And you become part of them in this way, that's so specific. Which, also another type of frontier is new motherhood, and new mothers are kind of like pioneers, in a way, which is an experience you write about in such a twisted, illuminating way. In "Orange World," you reference the "dark egotism" that informs early motherhood, the certainty that something bad will happen to your child, out of all the children in the world. But that kind of egotism, and its reverse, drives a lot of our experiences, our trips into new territories. Is that what makes writing about frontiers so appealing?

It's funny because every time I start off [a new story], I'll start naively believing that it really is a kind of frontier for me imaginatively. I'll be like, Oh, this will be a very different kind of story than its predecessors. [laughs] Time and again, I'll be like, Oh my god, [it's the same].

I think that's how you, just in a kind of humbling way, discover your own obsessions, and that feels like a haunting to me a little bit, or like those bad horror movies where the person thinks that they're escaping, and then the cab driver turns around, and it's actually the killer taking you back to the house, and you're like, Oh, no. It can feel like a recurring dream or something, where it starts to feel meaningful, because why do you keep regenerating the same images or the same preoccupations?

Then, there's a tension with that dark egotism. Everybody feels like they're the protagonist in their own story and they're striking out for the first time, and I think that can be a little dangerous too. We're sort of locked into the architecture of feeling at the center of things, even neurologically. So, it's kind of built into the organism.

I think that's how we experience our lives, and then I think it can be sort of disorienting to collide with either a landscape that's quite inhospitable to your dreams—your personal, individual dreams or the collective movements of people—and also with people who have a very different relationship to that place than you do.

I was thinking about that "The Prospectors." I really was a kid kind of obsessed with stories about the Gold Rush, and then I feel like there is just this untold, quiet mass grave of people who got mowed under by the quote, unquote American dream... There's something beautiful and necessary, probably, about that kind of demented hoping, hoping against all odds. I just think everybody is sort of born with the foreknowledge of their own death, and everybody needs to have a beautiful dream.

I do sort of think that there is that tipping point, where that kind of optimism becomes delusion or where it becomes something greedier, more self-focused, more dangerous. That's really interesting to me, and I just find that I really do keep finding different ways to tell that same story.

So much of your work acknowledges the boundaries that we're all aware of existing, and shows their permeability and how essential they are to our sense of selves, even as we resist them. And writing about those boundaries feels like another way of grappling with the essentials, the questions of nature and life—including parenting.

I think that [parenting] really was, for me, that same disorientation, where on the one hand you're sort of aware like, "Yes, this is the oldest story in the history of humanity. This is not a new genre," but, I really felt newborn too. I really felt muted at first. That experience was so totally transformative, and it was all new terrain for me, and it didn't really matter that there are thousands of commercially available maps and manuals to this place [laughs]. I had plenty of friends share their experiences. I read a bunch of books, and it still didn't matter. I was still like, What is this place?

They're my very favorite. One of the probably obvious advantages is that relative to a novel, they are short [laughs]. It's really not the same sort of "I'm taking an insane gamble" I just feel with longer projects. Swamplandia!, I feel like I had to rewrite that book multiple times, and it took half a decade, and you never know if it's going to pan out, and so, I think with stories, the timeline is a little different. Mercifully, I was telling you that I don't always know if it's going to work, but I figured that out much quicker, which is a relief. And then I also just think I've just been an avid story reader my whole life and there's something about fairy tales and ghost stories and myths, these more compact forms, where I feel like they can work on you almost the way that a poem does. There can be this real refinement of the language, and I love reading sentences and writing sentences, and there's a way where you can maybe slow down and pay attention to this sort of micro-pulsing of language. Not that you can't do that in a novel, but I just think it's a little harder for me anyway to sustain that sort of attention on the level of the line and sort of suspense on the level of the line.

And I really do think there's something about being able to sit down and finish something in one sitting. You retain it in a different way. Stories haunt me in a different way, and I think part of it is that I feel like I can hold them entirely in my memory. It's like some kind of geometry that I can hold and walk around the periphery of and examine from different angles.

Orange World and Other Stories is available for purchase, here.

NEXT UP
Entertainment
‘Euphoria’ Star Dominic Fike Is Going On Tour
Entertainment
Megan Thee Stallion To Host & Perform On 'Saturday Night Live'
Life
Gabi Abrão's Notes On Shapeshifting Will Soothe Your Existential Woes
Life
Rachael Finley Never Got A Guide To Life, So She Wrote Her Own