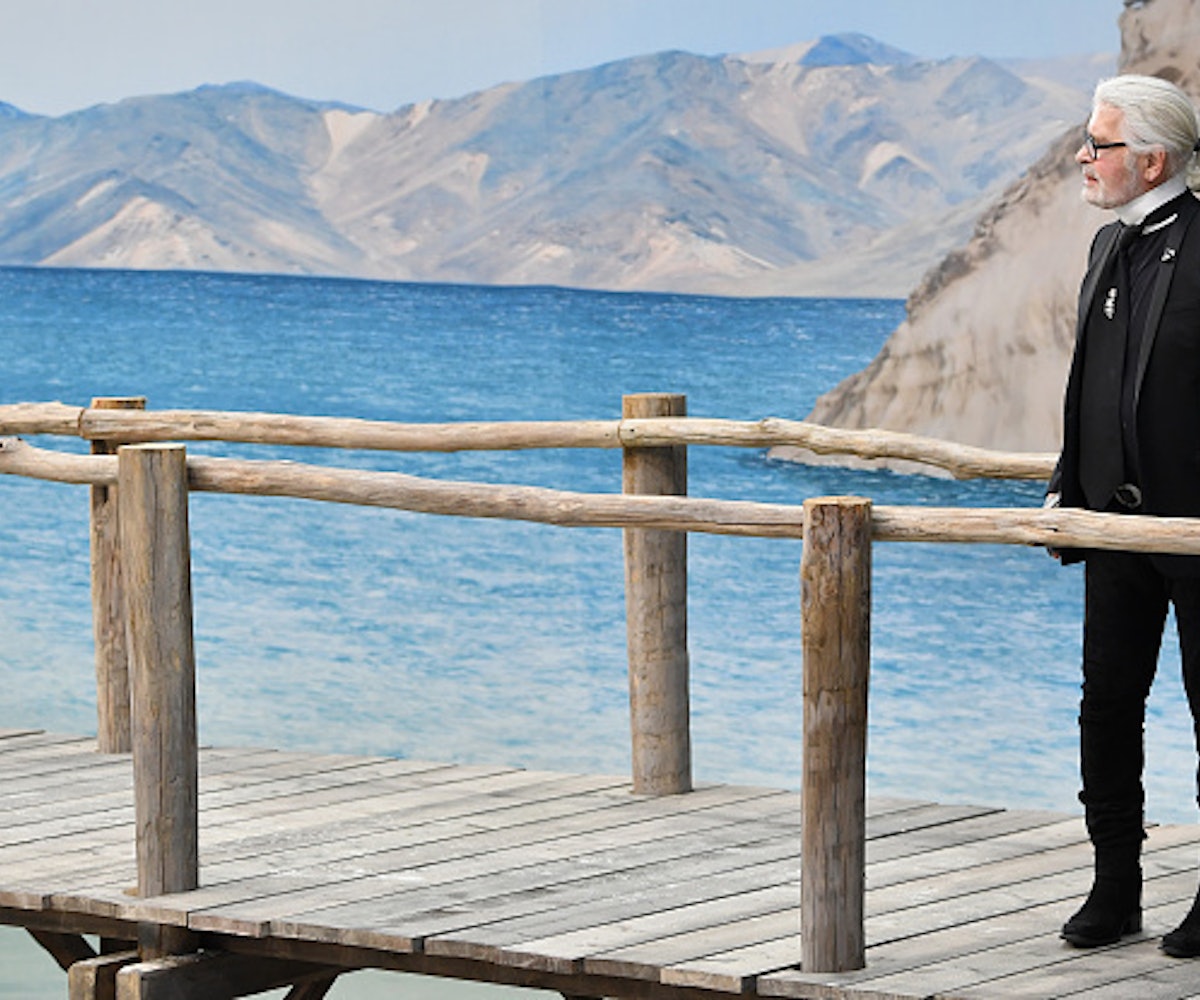 Lagerfeld died yesterday, and this quote is one of the many from the Chanel designer that have been circulating. It's evidence of his ability to shock the world by saying the sort of things that the bitchiest girl you knew in eighth grade was prone to declaring as she applied yet another layer of Bonne Bell Lip Smackers while looking into her own limpid eyes in the cloudy mirror over the sinks in the second floor girls' bathroom.

But in the same way that a 13-year-old girl's facile pronouncements have the ability to influence those around her, Lagerfeld's many cutting remarks—whether off-handed or deliberate or both—on everything from the way "no one wants to see curvy women" to the tackiness of tattoos (having them is like "living in a Pucci dress full-time") were able to transcend their inherent banality and make an impact on the culture. His words had the ability to delight those people who felt an implicit camaraderie in them; endorsing them felt like a tacit acceptance into his elite sphere. But Lagerfeld also dismayed those people who felt his quips were proof that all the cruelest things they think about themselves are also thought by cultural tastemakers, making for a cultural atmosphere that's toxic to all but the impossibly beautiful, the impossibly thin, the impossibly rich; making for a cultural atmosphere that, for all its heady external glamor, is as impossibly boring as middle school itself.

The toxic allure of Lagerfeld is akin to the toxic allure of a middle school queen bee; it is purely aesthetic, and it is pure in its aesthetics, and it is appealing for a while, until it decidedly isn't anymore. Because, the closer you get to it, the more you realize how vapid it is, how clearly it's a case of the emperor's new clothes. This is why Aleksander's Times profile of Kroenig and the cult of Lagerfeld was so brilliant, because in offering up Lagerfeld's absurd lifestyle, filled with fax machines and small talk about Dubai's weather, it exposed completely the conventionality of high fashion, the ways in which snobbery's aesthetics are ultimately pedestrian; it's all a capitalist flex, a perverse joke.

Just because something's a joke, though, it doesn't mean it's funny; it doesn't mean that it can't hurt. And Lagerfeld's willingness to be cruel—about ugly people, about fat people, about Syrian refugees—while never funny to begin with, only revealed the ways in which he was not only no longer a cultural leader, but existed outside of the culture altogether. Lagerfeld and his ilk hid behind a cloak of courtly appeal, they tried to divorce aesthetics from morality, claiming they were only celebrating their idea of beauty, and defending it from any dilution or debasement. They claimed that if you don't like what they have to say, or don't like what their tastes dictate, you can ignore it.

If only it were that easy. The reality is that the casual cruelty of Lagerfeld's worldview affected fashion for decades, and affected the way millions of women see themselves. And, of course, Lagerfeld was not alone in this, he was just a primary avatar of the way the fashion world works. But the fashion world is currently undergoing a reckoning; barely a day goes by without finding out an esteemed fashion house has done something wildly offensive. That's why it's unsurprising that, in the wake of Lagerfeld's death, there are as many paeans to his importance in the fashion community, as there are condemnations for his refusal to accept the fact that the inherent amorality of aesthetics doesn't mean we should ignore when they're deployed in an immoral way.

What has been most interesting about the personal Lagerfeld tributes that rushed in over the last 24 hours is the way in which so many of the warm ones focused on Lagerfeld, the man, not Lagerfeld, the designer. People like Cathy Horyn and Christy Turlington praised his "sanguine nature" and his generosity—his manners, his adherence to a bygone code of etiquette. What is being praised, then, is Lagerfeld's commitment to appearances, his desire to promote beauty (or, his idea of it, anyway) over everything else. This used to be enough, this idolization of aesthetics above all; it used to be the fashionable thing to do. But it isn't anymore. Now, people want something different from fashion and from those who work within it; they don't want to see stolen designs, culturally appropriated and racist looks, on the runway. They want something substantial, something that matters, something that evokes the future, instead of relying on the outmoded past.

Lagerfeld is a symbol of that past; he was one of, if not the, last of his kind. And that past had moments of beauty, but it relied on a current of ugly truths to fuel its existence; just like the fashion industry itself has moments of beauty, but relies on the horrors of sweatshop labor, and massive pollution and waste, to fuel its existence. Change is coming, though, no matter how slowly; and no matter how ugly that process of change might be, one thing is for sure: There is nothing very depressing about it.