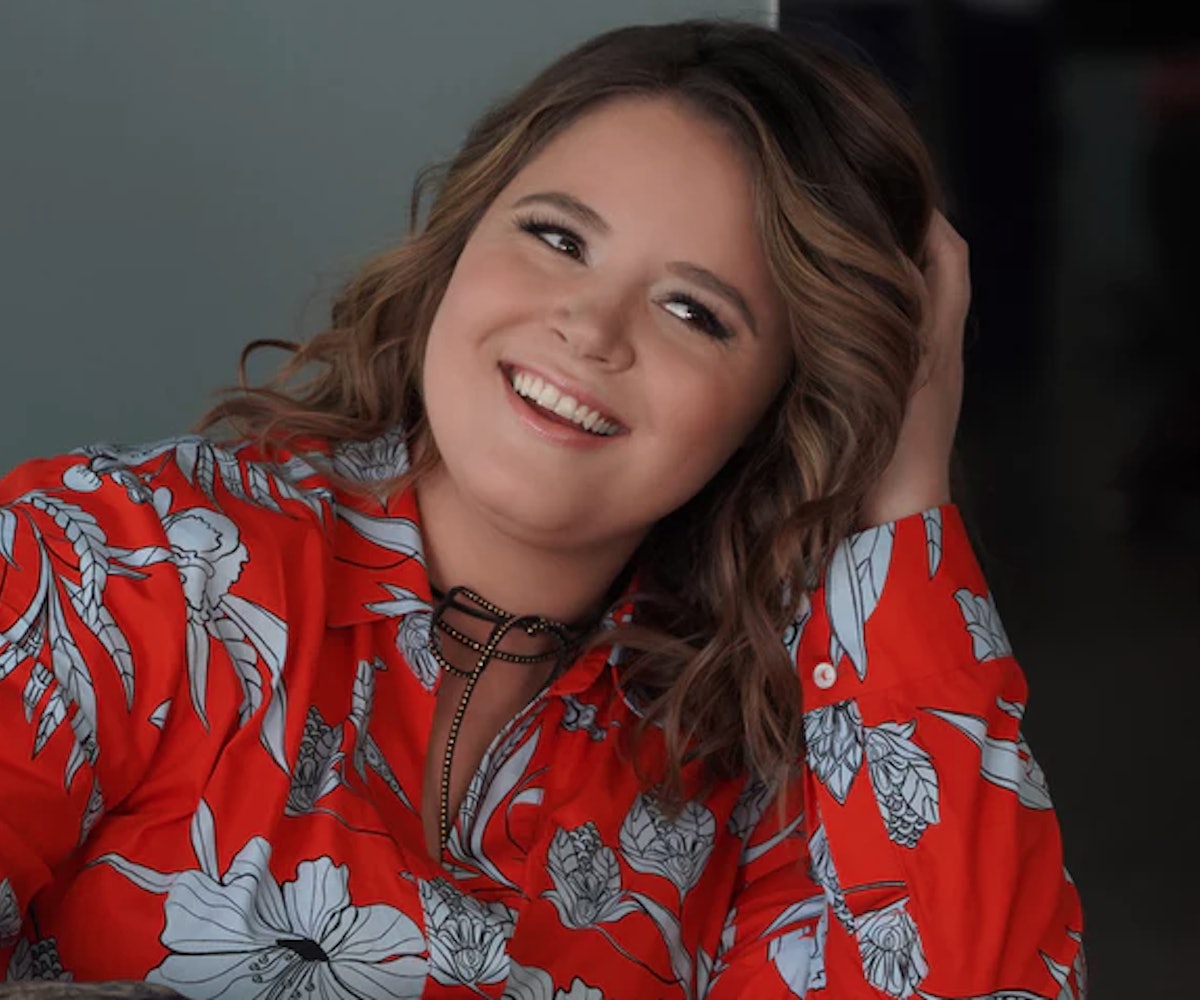 When you play a character who is probably best known for stabbing her husband, it is perhaps normal to want to maintain some distance between yourself and the part that you inhabit. But that's definitely not the case with Kether Donohue, who, when I ask her what her role as Lindsay on You're the Worst has taught her about herself, first assuring her that I know she's nothing like Lindsay, laughs and trills, "Welllll.... whenever someone says that, there's a part of me that's embarrassed, because I'm like, 'There are some aspects that are similar.'"

While this doesn't mean that Donohue advocates husband-stabbing (although, in Lindsay's defense, her marriage was punishingly boring), it does mean that she embraces the opportunity, she says, to explore her "shadow self," a Jungian concept that Donohue learned about from one of her favorite books, Women Who Run with the Wolves, by Clarissa Pinkola Estés, a Jungian analyst. Donohue tells me that, in the book, Estés talks with her female clients and helps them "embrace and tap into the darker parts of their psyche that they've repressed." And that's what playing Lindsay has done for her, as well; she explains: "Playing Lindsey has opened up a freedom to embrace that darkness, and see it as an opportunity rather than a shameful thing. I think it does play into that theme of embracing the complexities." But, Donohue points out, "It's not even just playing Lindsey, it's being on the show in general."

You're the Worst, which is airing its series finale tomorrow night, has been notable over its five-season run for offering an unflinching, often brutal, always funny look into the lives of four incredibly self-interested, near-fatally flawed friends, living in Los Angeles. The two leads, Jimmy (Chris Geere) and Gretchen (Aya Cash), have had a tortured on-again, off-again romantic relationship, and their respective best friends, Edgar (Desmin Borges) and Lindsay, have had their own friends-with-benefits situation as well. What makes You're the Worst so distinct from other shows centered around misanthropic friend groups is that it's been unafraid to make clear precisely why each of these characters are, you know, the worst, by confronting their mental health issues, like depression and PTSD, in a realistic, often uncomfortable, but wholly necessary way. You're the Worst doesn't offer mental illness as an excuse to treat other people—and yourself—badly, but rather offers it up as an explanation, a foundation for why its characters behave in often hurtful ways.

As serious as all that is, the show is also bracingly funny—and Donohue's Lindsay, the queen of perfect pettiness, is one of the funniest, frothiest television concoctions ever; the antihero we didn't know we needed, but of whom we can't get enough. Lindsay is an example of a woman who has probably been marginalized for reasons beyond her control, just by virtue of looking a certain way, or having a voice pitched at a certain tenor, or because she's a woman, and so takes control of her life by lashing out as she sees fit at the exigencies of the world. Donohue gives a revelatory performance, balancing the broader humor inherent to Lindsay's character with a palpable restlessness at her station in life and an urgent vivacity; Lindsay's dark streak is pure black, but it has some sparkle thrown in too. She's impossible to pin down, defying any label you'd like to place on her.

"People love to compartmentalize other people, particularly women," Donohue tells me. "For example, whenever I have a cracked phone screen, people are like, 'Well, you must be disorganized in other areas of your life.' And I'm like, 'Well, not really!' It's not that cut and dry." Showing that nuance, is one of the things Donohue appreciates the most about You're the Worst, telling me, "I think the show has certainly been a real gift, because, in comedies, it's rare to be able to play such a complex range of the human condition," and adding: "It's also telling me to not take things so seriously. It's okay to fuck up and make mistakes and not take things so seriously."

This is an important life lesson to learn, and Donohue makes clear to me that she's learned a lot not only from being on You're the Worst, but also just from having had the opportunity to spend the last five years—a pivotal time in her life, going from her 20s into her 30s—on the show. She says, "I have a joke where I say that the 30s feel like the puberty of adulthood. I booked this show in my late 20s, where you can still get away with being disorganized and not having your shit together. Then, when I hit 30, I was like, Fuck, I still feel like a complete disaster, but now I feel like I have to pretend that I know how to be an adult." But being on the show taught her that she was not alone in this feeling; she says, "I would look around and realize that none of us know what we're doing! You start getting pimples all over again. It's the puberty of adulthood."

Beyond accurately portraying the woes of Puberty the Sequel and the realities of mental illness You're the Worst also addressed other aspects of life that are rarely seen on TV, like having an abortion, which Lindsay did in the show's third season. "It was literally right during the 2016 election. It almost felt like the episode was perfectly timed—even though I know that wasn't the intention. Obviously in the writers' room, a year prior, it wasn't calculated. But, it just so happened that we were airing an episode where Lindsey is going to unapologetically have an abobo and then eat a pie after it right when the election was happening. It felt really good to portray that at that time, because it was like, Fuck you."

For Donohue, this ties into her larger experience of playing Lindsay, and how portraying this sometimes ditzy, always daring, complicated woman felt like a political move. She says, "Just to push that idea forward, that [an abortion] is not something that should be a big deal and that our rights are at stake and at risk... That does tie into the portraying the range of female complexities, too. Even Lindsay stabbing her husband, to me, that felt symbolic of a larger repressed anger coming out against the patriarchy in some way."

Donohue mentions the Twitter account of playwright John Patrick Shanley, and says that he once tweeted something like, "Art is supposed to depict the emotional savage places." It was an idea that really resonated with her, that spoke to the wild woman inside of her, the shadow self that Jung talks about, the manifestation of the id as seen in Lindsay. Donohue says, "I just remember reading that: 'emotional savage places.' I love that. I felt like I got to do that with Lindsey. Any emotion where in real life people would be like, 'Oh, that's inappropriate,' or, 'You should contain that,' I just felt like it was welcome and appreciated."

Donohue explains, "We all want to fucking scream at the top of our lungs a lot of the time, and we can't do that. It's nice to see a character that just fucking does it impulsively whenever she wants or feels like it, and I think that's appreciated. We all think and feel things and can't always express and be accepted with it."

Because, when it comes down to it, the state of the world, the tenuousness of its future, has so many of us wondering whether to just lay down and close our eyes or stand up taller and let loose with a primal scream. Seeing characters like Lindsay, who are not role models, per se, but certainly indicative of the ways in which it feels not just cathartic, but generative, to push back against society's norms, are so important. It reminds us that the world might be a cruel, careless place and filled with cruel, careless people, but that perhaps by extending care and forgiving ourselves for the tiny cruelties we inflict on others and on ourselves, we can reach another place, one of understanding, where there's the potential for progress, and an acceptance of our whole beings, full of shadows and light.

Easier said than done, of course. So, for now, maybe it's just time to say goodbye to You're the Worst and to Lindsay, a husband-stabbing, abobo-having antihero for the ages. But maybe that too is easier said than done. Donohue tells me, "I know intellectually that the show is over, but I don't know that I've emotionally processed it yet. I've been going through the motions of talking about it like I know what I'm talking about, but the truth is I'm probably going to get off the phone and have a big fucking cry."

The series finale of You're the Worst airs on FX on April 3.