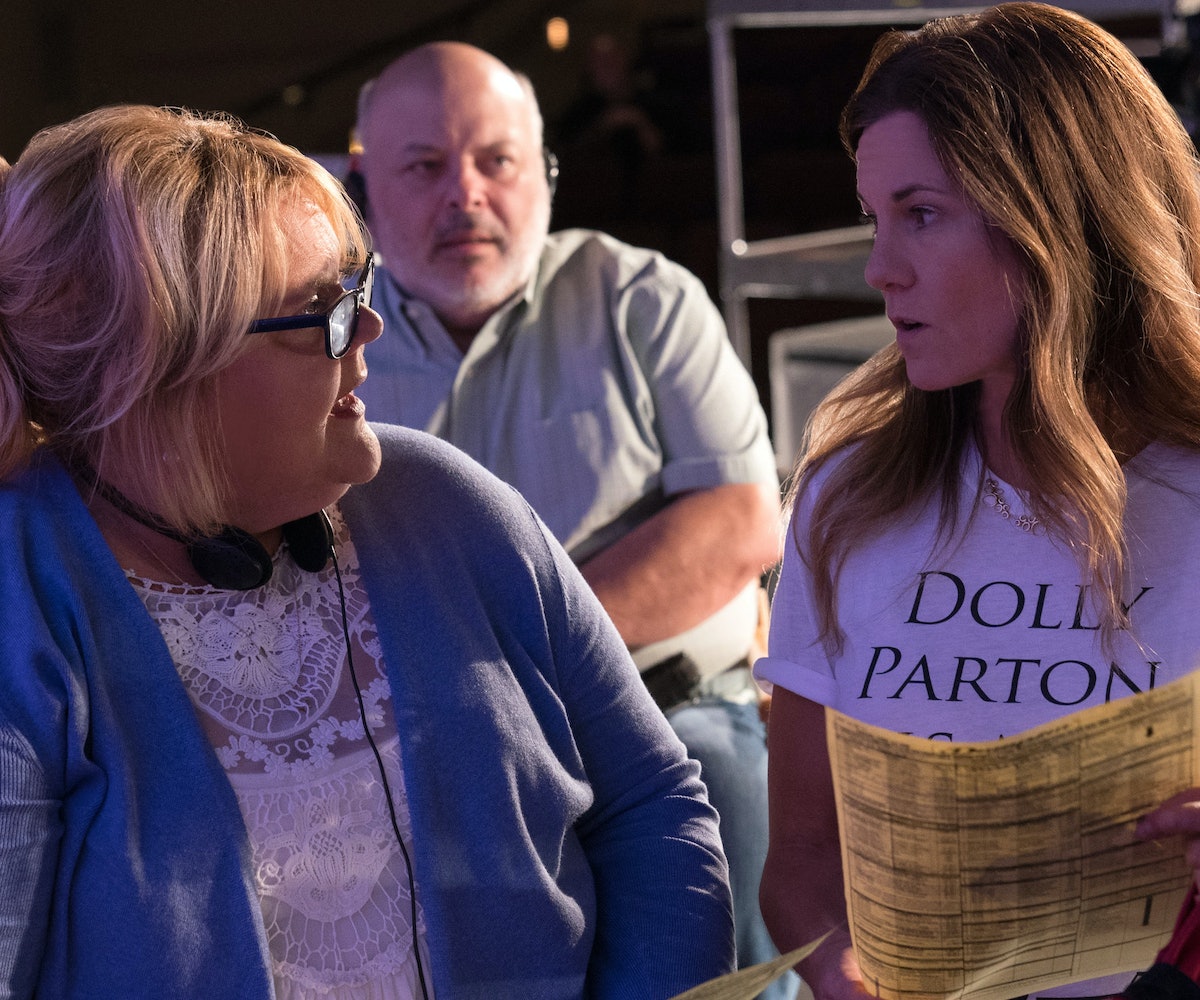 Dumplin' is not just a film, it's also a love letter to Dolly Parton—and it's a love letter to being a woman, and to mothers everywhere. Co-producers Jennifer Aniston and Kristin Hahn have been best friends for years, but Aniston had never acted in a project produced and written by Hahn as large-scale as this. Based on a book of the same name, by Julie Murphy, Dumplin' is that rarest of things: an actual feel-good movie that doesn't feel pandering or saccharine, just celebratory.

"Body positivity is what this movie is about, being more inclusive and giving women more permission to define beauty for themselves," Hahn told me recently. "Giving girls the inkling of the idea that maybe they don't need to buy into whatever it is they're being sold as the very narrow idea of what they have to look like… in order to be beautiful." She's excited that the film can be part of the broader conversation about image that's going on right now, and added, "That message is definitely out there. Dumplin' is not introducing that idea. Dumplin' is simply a part of a growing consciousness around that."

Below, we talk with Hahn about her work on Dumplin', how the film became an homage to moms, and, of course, Dolly.

What made you first pick up the book?

I was sent the book by my agent... The day the book came to me, I had typhus, which is a bizarre thing to have in the year 2018. And I was misdiagnosed, so I was pretty sick for about a month, and I'm fine now, but I was literally bedridden, I could not physically move. So I was trapped in a bed, and Dumplin' came, and I could do nothing but read and listen to music.

I opened this book, and I started to read, and I read it in basically one sitting because I couldn't move, and I fell in love with it. And I felt instantly like, god, this is an amazing movie waiting to happen. I loved so much about it.

What made you realize its potential as a film?

One of the things that I loved that I think we were able to capture in the film is there are multiple threads of story lines that are in this book—if I counted them there's probably like seven, and it was a great challenge for me as a writer to try and thread all seven of these story lines together in a way that was cohesive and organic—it's a layered cake of a love story.

The most important love story aspect of it, to me, is the one of self-love that Willowdean has to find for herself, and that's really the arc of the movie, self-love. But within that, there are the mini love stories that are a big part of that self-love story, which is a mother-daughter story, a story between two best friends, a story between a group of misfits who never thought they would all become close and they do. It's a story between a fairy godmother and Willowdean, who happens to be a drag queen. It's a story about an aunt and a niece; kind of like the second mom that becomes a really important person in your life if you're lucky enough to have one. And then the love story between Rosie and her aunt and Dolly Parton and Willowdean's best friend Elle. There's the love story of kind of an iconic figure who represents something to them that gives them inspiration and optimism to keep going and to believe in themselves.

Which parts of the script really transformed when the actors took them from page to screen?

The part that probably evolved the most was the drag queen sequences because once we got in there and cast the roles and started playing around with those scenes, they evolved and Ginger Minj is one of the most brilliant, brilliant improvisational actors, and Harold Perrineau who was an extraordinary craftsman. We had a lot to work with once we started the process of rehearsing and getting into it, but those two probably evolved the most.

What was it like writing and producing on a film starring your best friend [Jennifer Aniston]?

It was so fun and easy. Jen and I have worked together in all kinds of different capacities, some that people aren't even aware of. It was very organic, meaning I've shot, directed commercials that she's in, I've shot behind-the-scenes stuff. We've just kind of been behind the scenes together for so long now that it just felt like the completely normal evolution of that creative collaboration that we've had, and that trust that we've had for a long time.

For her to have been such an integral part of the first screenplay that I wrote is so symbolic for me. It's so moving, and the fact that it's kind of an homage to both of our mothers is just icing on the cake, because I knew Jen's mom, she knows my mom and we kind of had fun pulling things from both of our childhoods and our mothers in a loving, kind of fun way.

She's a brilliant producer, such an amazing editor. She's just incredible with stories, with notes, with characters and character-building and authenticity. She has an amazing work ethic, so all those things combined with her obvious incredible talent just make for a force. She's a force of nature at this point.

I just pinched myself sitting on set, watching her work and getting to write for her after all these years of working together. It was a dream, it really was.

Are there any specific traits or moments that came from your mom, or Jen's mom?

My mom is still living, and Jen's mom passed away. Jen's mom was a former model and an actress and was very focused on her physical appearance, and both of our moms were raised in a generation of women who were pioneers. They were pioneers in the workspace, and it was not easy, and they were so driven by, frankly, fear of other people's judgment and living up to some ideal of what a woman was supposed to look like, sound like, act like, and at the same time try and make progress in their chosen fields.

My mom was in business and banking, and she was the first woman in a boardroom in her world, and she felt like she had to dress a certain way, present a certain way, and there was just a lot of pressure behind it all… The aspects of Jen's mom and my mom that I infused into the character on the page, and then Jen kind of brought to life in her own character-building work that she did for Rosie, was really kind of a loving homage to the pressure and the fear that women are so often subjected to, in the sense of like beauty and acceptance in this very confined, small box.

There's a line in the script that comes directly from my mom, where she would do her hair in the morning, and she would say, "Do I have any holes?" I would have to come in and check the back of the hair every morning before work, before she left. Because back then, it was like they would do this helmet, kind of almost like they were going into battle, helmet hair, with a lot of hairspray. And you had to check for holes before you sprayed the helmet into place.

What was the most rewarding/effective piece of advice you've ever received in your career?

"Never take no for an answer." But I mean that in the sense that, if you get a "no," go to the next door. It doesn't mean you have to never leave that first door and wait for a hundred years for a yes, it means keep going, go to the next door, the next door, and the next door. If I stopped every time I was rejected, I'd be living in a gutter somewhere because everything we do is… you have to find your like-minded people who understand what it is you're trying to do in life, what story you're trying to tell, what you're passionate about, and if you get a no, it just means, to me, that that person or that company or entity is just not in that same mental space as you are in terms of the passion and the vision you have.