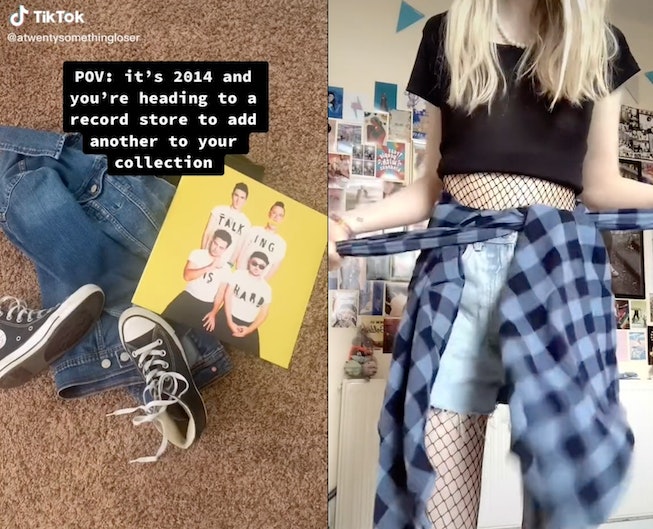 It’s time to plug in your copper string lights, cue up The 1975 and get Zooey Deschanel bangs again: TikTok has come for 2014 Tumblr nostalgia. It was only a matter of time before knee socks over fishnets and Perks of Being A Wallflower-core floated back into our orbit, because when it comes to the rapidly increasing wheel speed of the trend cycle — which used to be every 20 or so years, but now is apparently as short as seven — nothing is sacred.

It’s unclear why 2014 Tumblr is trending, as opposed to some of its earlier heyday years before it was purchased by Yahoo in 2013. In an informal poll of eight of my 27-29-year-old friends, every single person listed 2010-2012 as peak Tumblr era, which for me, was between junior year of high school and freshman year of college — a time when I religiously updated my Tumblr “Chaos Is A Friend Of Mine,” to quote Bob Dylan with Blind Pilot lyrics and photos of “and in that moment, we were infinite” tattoos in typewriter font.

Nevertheless, the hashtag #2014tumblr currently has 68 million views, which dwarfs #2013tumblr with 2.5 million views. The hashtag #tumblr2012 has only 1.1 million views. Creators are embracing Tumblrcore in a way that celebrates both its nostalgia and cringe — with users sharing things they posted on Tumblr with the same exuberant shame usually reserved for a song you wrote when you were 14 or for an embarrassing diary entry.

Many of the videos involve getting ready after being on Tumblr, where a creator dons an outfit that probably includes some combination of the following: fishnets, ripped sheer tights, velvet circle skirts, lace-up boots, high-top black Converse, that American Apparel canvas tote, oversized band tees, an Arctic Monkeys record, and liquid cat eye liner. It’s an aesthetic that can best be summed up by one commenter, who wrote: “This video smells like urban outfitters.”

Other videos are less tongue-in-cheek self-referential, and more genuinely nostalgic. One video is captioned: “The things i’d do to go back to 2014 tumblr😔” and then is just a slideshow of images that are distinctly, nauseatingly 2014: succulents, Coachella, American Horror Story, Vine, and girls climbing chain-link fences in combat boots. Its comments include things like: “I was 16/17 in 2014 and this is making me feel ancient brb calling the cemetery to reserve my grave plot.” Or the more potent: “Not ya’ll romanticizing SIX years ago like it’s been years.”

One video shows some friends really going in and throwing a 2014 Tumblr party to celebrate the aesthetic — which outfits that include wool wide-brimmed hats, horizontal stripes and flannels tied around waists. Most of the comments are users saying they still dress like this, which, fair: It’s only been seven years.

While #tumblr2010 and #tumblr2011 hashtags aren’t a thing on TikTok, and at the risk of sounding too “old man yells at cloud,” this girl gets it: