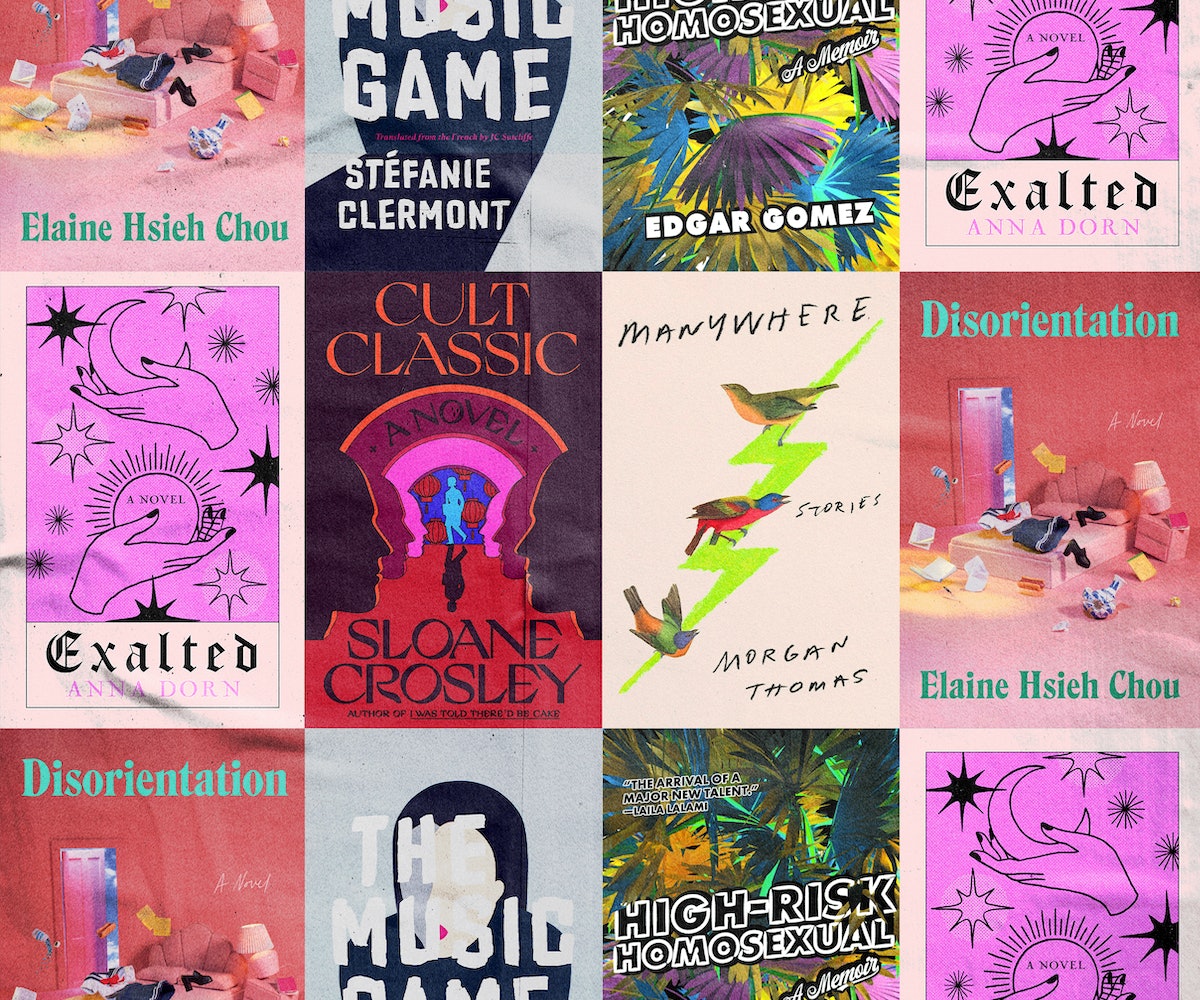 Heidi Montag, former star of The Hills, recently expressed on Twitter the only New Year’s resolution that feels worth trying for. “I want to start reading books again,” she wrote.

It been a difficult year, one where keeping the concentration to read has felt near-impossible, where the stack of books on my nightstand can’t rival that TikTok trend where girls dance to the caption, “is he hot or is he just not into you” and where I abandoned my reading goal months ago. I’m not going to pretend like all our problems will be solved now that it’s 2022. But two things are true: The days are getting longer, if only by seconds — and there will be new books.

We’re excited about Manywhere by Morgan Thomas, a collection of short stories about queer characters in the South that range from warm to the uncanny. We’re looking forward to the second poetry collection Time Is a Mother, from Ocean Vuong, whose sentences are like little icebergs: exquisite and annihilating. We can’t wait to sink our teeth into Sloane Crosley’s surrealist novel Cult Classic, about a woman who ducks out for cigarettes and runs into all her exes — and there are so many more books we’re excited to add to our ever-growing stack. (P.S. If there’s a book that looks cool, we suggest you pre-order it to help out the writer!)

This debut novel is a love letter to a group of friends and immigrant families from Queens. Andreades writes about the soundscape of growing up in New York City: “If you really want to know, we are the color of 7-Eleven root beer,” she writes. “Dark as 7 p.m. dusk, when our mothers switch on lights in empty rooms. Exclaim, Oh! There you are.” Of course, they’re teens, so they also belt Mariah Carey and roam the streets while pining over crushes.

This novel captures the ever-so-complicated intensity of those female friendships that feel more like soulmates — from teens running though seedy L.A. bars through adult life in California and New York, Fiona and Jane are two women who deal with a lot of s*** that comes with life: opportunistic partners, a parent’s sudden death, etc. Their relationship is strained by it all, but they always have a home in each other (*sobbing*) in this intimate, raw portrait of friendship.

We know you shouldn’t judge a book by its cover, but everyone does, so who cares — look at that stunning cover! In this debut novel, a wedding planner for the wealthy and her congressman brother in Brooklyn deal with ambitions, their Puerto Rican roots, family secrets (dun dun dun!) and their absent mother in the wake of Hurricane Maria.

This gorgeous and hilarious queer coming-of-age memoir from Edgar Gomez has it all: cockfighting, amateur strip shows, and two absolutely bananas losing your virginity stories — but at its heart, it’s about the sense of belonging and love for a community, and a deep joy for not just being able to dance at the club, but for having someone to smoke cigarettes outside with you when you get kicked out.

Praised by ballsy writers like Tommy Orange and Nico Walker, Fuccboi is a debut coming-of-age (but probably not in the traditional sense!) novel about hypocrisy and self-awareness, told through the story of Sean, a f***boy failed SoundCloud rapper and weed farmer who’s back in his college city to write, work for Postmates, hook up with a rotation of girls, and avoid responsibility.

Praised by Torrey Peters and Roxane Gay, this book of stories follows queer and genderqueer characters in the South, ranging from warm to the uncanny. In one story, a trans woman purchases a pregnancy bump. In another, a young trans person brings home a replacement daughter for their elderly father. And in another, a young Virginian flees their relationship to pursue an intersex person from Colonial-era Jamestown.

Things get weird in this mesmerizing debut short story collection featuring 12 stories about macabre, beautifully dark images (not unlike a Lana Del Rey song) that include: a girl growing wings on her legs, a group of children who steal a haunted doll, and a runaway bride who encounters a sea monster. Think: sexuality, guilt, contradictions, drama!

My Mess Is a Bit of a Life: Adventures in Anxiety by Georgia Pritchett, HarperCollins, February 8

Like many of us, TV comedy writer Georgia Pritchett (who’s written for all your favorite shows, including Succession and Veep), has struggled with anxiety her whole life. She went to a therapist, who suggested she write down a list of things that worried her. Instead, she wrote this book of essays that captures anxieties from wondering if the monsters under her bed as a kid (LOL) were comfy enough to apologizing to the doctor to let him know she was in labor.

Let’s hear it for an indie sleaze-era novel. After their friend commits suicide, three women go out into the world of 2010s Canada to California and back, where they navigate class issues, deep friendship, betrayal, a gender transition and anti-globalization protests. You know, just millennial stuff.

The Nineties: A Book by Chuck Klosterman, Penguin Press - February 8

Gen X icon Chuck Klosterman, the original Hot Take Guy whose Sex Drugs and Coco Puffs made a generation of college students think they’re really, really smart, is back! This time he’s vamping on the ‘90s. We’re interested to hear the takes from the man who surmised that Weezer frontman Rivers Cuomo (no relation to NY’s disgraced former governor) is devoid of the irony he purports to have. In his new book, Klosterman talks about “Cop Killer,” Titanic, phone books, Oprah, and Alan Greenspan, and will include the painfully Klosterman line: “The video for ‘Smells Like Teen Spirit’ was not more consequential than the reunification of Germany.”

This queer, coming-of-age, psychological novel is about a girl who transfers to a chilly, picturesque boarding school in Maine and becomes obsessed with the girl who leads the cult chapel choir. Think preppy, Gothic, woods, dark academia, obsession, Fight Club, drama!

This memoir is about a Native woman growing up in the thriving punk scene of the Pacific Northwest trying to balance her punk rock life while doing the honor of her icon great-grandmother — a linguist who helped preserve her Indigenous language — proud.

In this satirical, outrageous debut novel, Ingrid Yang, a 29-year-old PhD student, just wants to be done with her dissertation on the late canonical poet Xiao-Wen Chou. But she finds a note in his archives that leads to an explosive discovery that upends her world and the world of everyone around her, shifting Yang’s relationship to white men, white institutions and herself in what becomes a kind of Asian American literary studies whodunnit with at least one drug hallucination scene. Nothing better to spoof and critique than the absurdity of academia.

New England boarding school sex scandal alert! Sink your teeth into something salacious and meaningful with this novel about an English teacher tasked with investigation a charge brought by one of his classmates that he was abused by a teacher, who was one of the English teacher’s greatest mentors. He must grapple with everything the Thought He Believed In.

Ocean Vuong’s sentences are like tiny icebergs: exquisite and annihilating. You may know him for his novel On Earth We’re Briefly Gorgeous, which is going to be adapted by A24. But he’s a poet at heart — and in his second book of poetry, he explores life in the aftermath of his mother’s death. Here’s a little teaser as a gift: “How else do we return to ourselves but to fold/The page so it points to the good part,” he writes.

This suspenseful novel has two narratives that can be read in either order — choose your own adventure! Each section is narrated by a South Asian migrant to Australia and contends with the monsters that plague them and so many others: racism, misogyny, and ageism. Lili’s narrative is set in Montpellier in the early 1980s where she worries about her creepy neighbor and how other North African immigrants are treated, while Lyle’s narrative is set in a near-future, radically right-wing Australia where he works for the sinister government and keeps a low profile life in a country that’s banned Islam.

We know, we know: You read books to not think about the internet. But what if instead of thinking about the internet in a “get me off of this thing,” way, we deepen our understanding of how it functions in our lives? In this book of essays in alternative forms, including programming language, tweets, and lyric prose, Joanna Walsh explores what it means to be a woman on this thing called the internet. Expect some philosophizing on tech, identity, selfies, and social media.

Elif Batuman, author of the intoxicating novel The Idiot about the strange relationship between Selin, a Harvard linguistics major and her crush Ivan, is finally coming out with a much-anticipated sequel. Either/Or takes places in 1996 and follows Selin throughout her sophomore year as she attempts to make sense of everything that happened the summer before.

Whenever I read Sloane Crosley’s essays, I laugh out loud, prompting people to turn their heads and try to get a glimpse of the book jacket. Which is why I’m especially excited for her upcoming surrealist novel Cult Classic, about a women who ducks out to buy cigarettes during a dinner party and ends up running into every single one of her exes.

This witty novel is follows Emily Forrest, the woman behind @Exalted, a popular Instagram astrology meme account. Unfortunately, she doesn’t really believe in astrology anymore — until she finds a guy with a birth chart so perfect, she begins to lightly stalk him around Los Angeles. An hour or so east, Dawn Webster is an aging, single lesbian who scrolls the account to feel seen — and to help her through yet another break-up. Exalted bounces between both perspectives, for a brutally funny and observant ride through astrology culture, love, and self-discovery.

A young journalist from Mexico City’s investigation of a murder in a rural town leads her to a woman who has become the most legendary healer in all of Mexico. We see the stark differences in their lives and learn about the healer’s journey, from taking mushroom to talk to her ancestors to the loss of her abilities when her cousin is murdered in this sharp, witchy novel.

Taking place over a semester in a San Francisco art school, Joelle has one assignment to complete. But she keeps getting distracted by everything: the pressure to make Art under deadline, her own dysfunctional family, the guilt trip her mom gives her for not sharing her loan money, and by her beautiful, wealthy roommate who makes beautiful art without a care in the world — for anyone whose ever thought, “WTF am I doing,” about a creative pursuit.