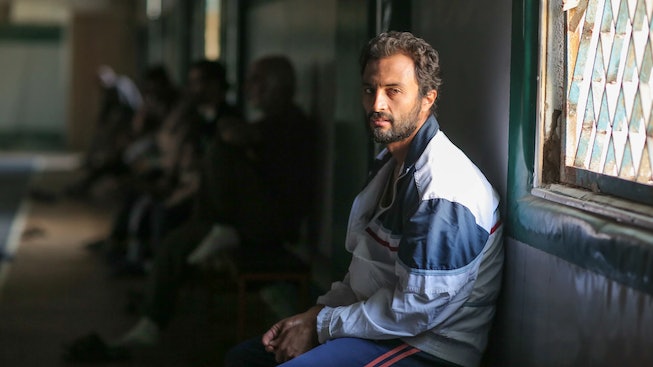 When we first see Rahim, the puppy dog-eyed protagonist of Asghar Farhadi’s A Hero, he’s on the ascent. Rahim climbs the endless scaffolding affixed to the exterior of Naqsh-e Rostam, the ancient and revered archeological site that’s the final resting place of Darius the Great and his son Xerxes; he’s jovial, a little winded, and welcomed by workers who offer him tea. Rahim declines, and is promptly teased by one of the men. Does he prefer tea from the prison over tea served in one of the country’s most respected historical landmarks?

As Rahim begins his descent, the reality of his impromptu visit shifts into focus: Rahim is on a brief leave from prison, where he’s serving out his sentence for an unpaid debt. The pain of his imprisonment reverberates across Rahim’s life; his young son Siavash suffers from both a stutter and the absence of his father; his clandestine girlfriend Farkhondeh longs to start their life together; and Rahim himself can’t bear the thought of returning behind bars. Then suddenly, as if God himself decided to cut Rahim some slack, Farkhondeh finds a purse with 17 gold coins — enough to potentially get him out of jail and on his way to repaying the rest of his debt to his creditor.

The jubilation is, of course, short lived. Whether it’s a God-fearing reflex or his screaming conscience, Rahim vows to find the coins’ rightful owner. He’s successful, and it’s here that the old adage “no good deed goes unpunished” — an observation noted by many a critic since A Hero premiered at the 2021 Cannes Film Festival — swings into action. Rahim’s Samaritan act becomes easy public relations fodder for the prison, which jumps at the opportunity to cover up another prisoner’s suicide with a feel-good story. Rahim is coached for newspaper and television interviews that praise him as a local hero. A charity raises money to help with his remaining debt, and even secures him a job with the city council.

But just as Farhadi has Rahim climb Naqsh-e Rostam only to quickly come back down, A Hero follows the same trajectory. The creditor morphs from an ambiguous, heartless being to a flesh-and-blood man who reasonably casts doubt on Rahim’s story and lofty promises. Rumors discrediting Rahim circulate online. Does something as elementary as good or bad, right or wrong, even exist in a world that grows more convoluted by the minute?

“He's basically a simple man who's in a very complicated situation,” explains Farhadi to NYLON over Zoom. “There is a line, for example, in the film that I took out in the edit that Rahim would tell to his girlfriend, Farkhondeh, that ‘I'm too simple for this life.’ When he says he's simple, it's not actually not a bad thing. Life right now, unfortunately, is too complicated. The natural way of living is where Rahim is. When I was younger, most of the people were like that, like Rahim.”

Farhadi’s gripping drama may be set in Shiraz — an ancient city embedded deep in the Iranian cultural conscience and associated with historical and mythical champions alike — but there are no heroes, or conversely, villains, to be seen. A sense of morality no longer creates legendary figures; instead, it has an unfortunate human cost. Farhadi reminds us of this throughout the film, but it’s especially poignant in the first act, when a fellow prisoner accosts Rahim for speaking positively of the jail to the press, not out of material benefit, but out of unadorned sheer goodwill. "Nothing?” he asks Rahim, bewildered. “You covered up their sh*t for free?"

Farhadi discusses reputation, the realism of his films, and more, below.

A Hero is now playing in theaters and is available to stream starting Jan. 21 on Prime Video.

A Hero is set in Shiraz, which has immense cultural significance in Iranian culture, especially in terms of its legendary heroes. But in the film, we don’t see much of the city and the story plays out in everyday interiors like cars, homes, and offices. What was the reasoning behind this?

Yes, and when I even made my movies in Paris, we didn't go to tourist spots, what really makes us choose what location that we are going to shoot the film is the story itself. And because this is a story that is kind of realism, the realistic stories, we see mostly inside the lives and the houses of these people. Shiraz is a city beloved by all Iranians, and because of its history, everybody respects it. But even in that film we don't go and see the very historical spots, with the exception of Naqsh-e Rostam at the very beginning of the film, which has a story point. That's why it shows up. When I went to Shiraz for the film and saw Naqsh-e Rostam in person, it really moved me and I think it's really one of the most important archeological places in the whole world. I didn't want to start it off at a tourist spot, I wanted it to be woven in the fabric of the film.

Rahim means well and is very likable, but is also an incredibly passive character in the film. Almost all of his decisions are ones that are suggested to him. How did you and Amir Jadidi balance him to operate like this but not come off like an idiot?

Yeah, when I decided the title, A Hero... when you hear the word "hero," you always have this cliché in your head of the characters being very practical, very actionable, they do stuff. They make decisions very fast and are strong. But we have a character here that doesn't make any decisions for himself. He always makes decisions based on other people's needs and wants. This is the complete opposite of being a hero.

And it could make the character super passive and a kind of an idiot that we don't like, but I wanted the character to be relatable. I didn't want people to not like the character. One of the reasons that makes us like him is that we understand that he's not a calculating kind of guy.

He's basically a simple man who's in a very complicated situation. There is a line, for example, in the film that I took out in the edit that Rahim would tell his girlfriend, Farkhondeh, that ‘I'm too simple for this life.’ When he says he's simple, it's not, it's actually not a bad thing. Life right now, unfortunately, is too complicated. The natural way of living is where Rahim is. When I was younger, most of the people were like that, like Rahim.

I actually hear that a lot from my parents, too. They say the same thing. While Rahim is this simple, passive guy, the women in this movie are the total opposite. They're the ones who are making the decisions. They're doing everything and he's listening. And I found that very realistic. In my experience with Iranian women, they are decision-makers.

Well, that's a very correct thing that you pointed out. If you look at it from the outside, from a foreign perspective, people look at Iran and it seems like that women are passive and men are more active. But in the real life of Iranians these days, it's actually completely the opposite. Women are more active and men are more passive. And this is not something that I forced upon the film, that's a reality of life in Iran, that because of all the limitations that women are going through, they're active, they're trying to be active and women are way more than men.

The children in this movie are great. They're such good actors for how young they are. How do you direct a young child? What is this experience like?

Working with child actors is very hard every time that I work with them. I feel like I always tell myself that this is the last time I'm working with them, but when the films are over and I see how impactful the children are in the film, I change my mind and I bring the children in my next movie as well. Looking at this film, the children are up to a point just observing the adults fight. But as we gradually get to the end of the film, we see that the children are getting more involved in the fights between the adults and trying to find a solution to the problem. In my other films like this, the children would always stay as an observer throughout the film, but in this film it actually seems that they have grown up. They move to another level.

These children, they all have an iPhone and an iPad in their hands and they're in touch with the whole world. They're really different from those times. Working with children and trying to get good acting out of them is very hard, because it's interesting that children are always full of imagination. They're always playing games all the time, but at the same time, when they don't believe the games that the adults are playing. Because making a movie is kind of like a game, right? We’re just saying, "OK, you're going to be Rahim, you're going to be Bahram." So we are just playing a game. But at the same time the children, looking at this game, and they just don't take it seriously. They're just laughing at it. What kind of game is this? And the method of working with children is very different from adults. I'm not trying to give them back a story. I'm not trying to explain the characters to them. Everything should be very simple. It's very different from working with adults.

The core of A Hero and Iranian culture in general, is pride and reputation. Those are huge things, especially for older generations. For my generation, it's always been a point of confusion. I’m wondering if you've seen an attitude shift in Iran. Are the younger generations, like these children with their iPhones, moving away from these long-time norms?

I think the new generation, the way that they look at their honor and reputation is very different from the last generation. With the last generation reputation was the biggest investment that people had in their lives. It had good points, but at the same time, some people will sacrifice everything they had in order to project a good image of themselves to the society. And it would cause them to have a double life. Their private life and their social life are completely two different things. But the new generation has less of this in them, and their private lives and their social lives, they're getting closer to each other. Maybe part of it is the social media, because they can share their private life to everyone much easier.

Throughout A Hero, there's a lot of talk about miracles. Rahim worries what God is going to think, all of this stuff. And then also at the beginning of the film, we see the title card Be Nameh Khodah, in the name of God. Could you expand on this?

This is something that has a both religious and cultural side. You can see some people who are not religious people that act in a way that is very religious, even if they don’t believe. It has a very deep roots in our culture. So for example, Rahim's character, we never see anywhere that he's a religious person, but the way that he speaks and acts in the movie, it’s as though there’s supernatural forces at play, like the calculator that doesn't work and the pen that doesn't write, and he believes it.