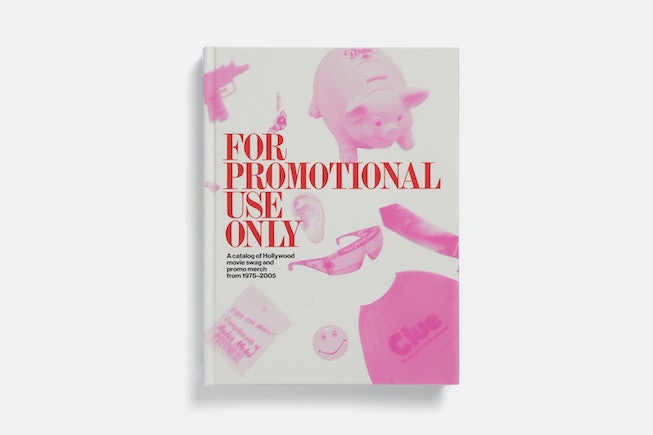 From a fisherman’s hat emblazoned with the logo for The Notebook to Being John Malkovich Russian nesting dolls to Jaws beach bags, studios have gone to some absurd lengths to promote their films. If you’re lucky, you find some of this merch while boldly browsing the t-shirt rack at Goodwill, but most of it ends up lost in boxes in people’s basements — until now. A24, the studio behind strange, bespoke films like Midsommar, Moonlight and this wild Lamb movie I can’t wait to see, is unearthing some of the strangest movie marketing merch in a new book, For Promotional Use Only: A Catalogue of Hollywood Movie Swag and Promo Merch from 1975-2005.

For Promotional Use Only presents 165 marketing artifacts that show just how far studios go to promote movies, making it an equally good gift for the movie lover or marketing cynic in your life. Of course, there’s an irony in selling a coffee table book ($52) of what are essentially ads — but nothing is sacred and advertising has long been a form of art in itself, even reaching fine art classification.

The photographs, which together look like the greatest thrift store haul of all time, but equally like treasures you’d find in a McDonalds Happy Meal two decades ago, include everything from a Godzilla flashlight and a Bean mousepad to a Twister necktie and a Clue crewneck (would 100% buy). They’re also interspersed with essays on the history of movie merch, including an interview with Steve Ellman, who was behind the Jaws beach bag, and an essay from culture critic Lindsay Zoladz. (As an aside, they may not make movie merch like they used to, but book publishers have been employing some over-the-top tactics, like this confusing Sally Rooney bucket hat.)

As part of the release, the studio is hosting a charity auction of most of the items, including a lime green Parent Trap fanny pack, a Sixth Sense knockoff Magic 8 ball and a Wayne’s World plastic cup. The auction is being hosted in partnership with @NightPromoting, a Twitter account that chronicles weird movie merch.

The auction will go live on Thursday on A24 Auctions and will last through the end of the week, with proceeds going to the Vidiots Foundation, an alternative video store in LA that hosts screenings and educational programs. See a peak from For Promotional Use Only, below, and buy the book here.

A24
NEXT UP
Life
A24’s On The Dance Floor Is Its Most Fun Coffee Table Book Yet
NYLON Nineteen
Kosar Ali Is A Met Gala Aficionado
Culture
Jenna Ortega’s Childhood Hobbies Included Animal Autopsies
Culture
Remember When Gossip Girl Made The Quintessential Thanksgiving Episode?