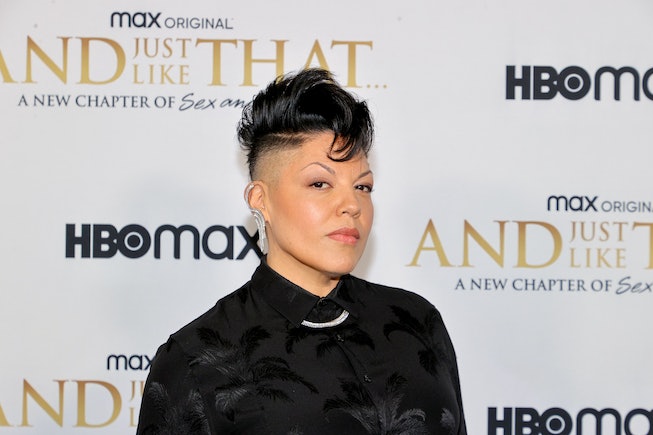 We couldn’t make it half a day into Pride month without an appearance from the one and only Che Diaz. In a cover story for Variety, interviews with Sara Ramirez and showrunner Michael Patrick King reveal that whether we asked for it or not (and I don’t think anyone did!) we’re getting a lot more Che Diaz in And Just Like That Season 2.

Ramirez’s Variety photoshoot is one we can only hope meant to be “zany,” but is more a cautionary tale about why one should never do a costumed photoshoot. Ramirez looks, purposefully, like a clown, polka dot necktie and flower brooch and all, with, for whatever reason let someone draw a heart onto their face. The cover and corresponding headline, “Yep, I’m Che” (a riff on Ellen’s ‘Yep I’m Gay’ 1997 Time Magazine cover) was enough to spawn not one but two groups texts between my friends commenting on the continued absurdity of whom the article calls “the most polarizing character on TV.”

The article is half about Ramirez’ journey to playing Che — a character written specifically for them — and half King musing Che is polarizing because people aren’t used to seeing a nonbinary character on TV. Whatever your opinion of Che Diaz is, King confirmed that we’re going to be seeing a lot more of them in Season 2.

“One of my burning passions about Season 2 is Che,” he said in the interview. “I want to show the dimension of Che that people didn’t see, for whatever reason — because they were blinded, out of fear or terror. I want to show more of Che rather than less of Che. Like, really.”

While he has a point — and it is true that Che is certainly the most famous nonbinary character on mainstream television — the widespread “terror” Che that incites from queers and straights alike that has gifted us with enormously funny tweets, memes and bootleg merch — isn’t necessarily because Che Diaz or Ramirez is nonbinary. Part of the widespread LOL feels like it’s the character of Che Diaz themselves, who, at times, feels like an HBO exec’s version of a woke nonbinary comedian. Other times Che Diaz sometimes feels like they’re more there to teach an audience about being nonbinary 101, or to help Miranda with her gay awakening, than to just be a person. But wherever you land on Che, I think we can all agree that no comedian in 2022 would ever refer to their show as a “comedy concert.”

The interview is significant in that Ramirez mostly stayed out of the press during the show’s run, and in the interview they seem to distance themselves from the character. “That’s the beauty of being grown — I don’t have to receive everything! And this is Michael’s baby,” they said. “He created this role. He wrote it. Those are his and his writing team’s jokes.”

“What I love about Che is that Che is complicated and messy and human. Che is a great reminder that even when we don’t like someone in our community, they still deserve love, safety and joy, like everyone else,” they continued. “But the movement for liberation includes everyone, even people we don’t like. This movement, this fight, this party of pride, isn’t just for the people who make us feel cozy and cute — it’s for everyone.”