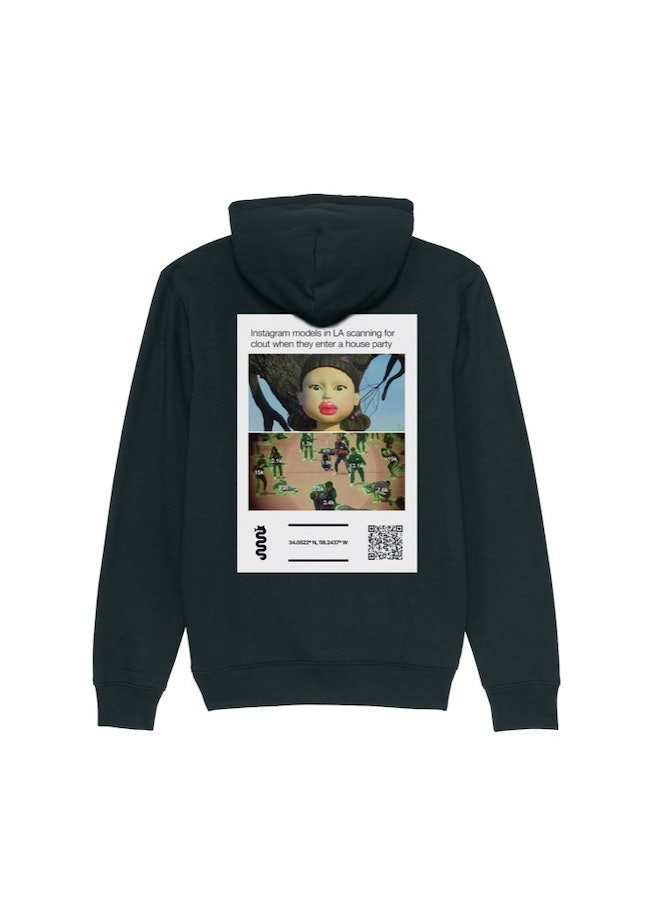 “There was no real intention. I just thought of a snake,” he says. “I wanted to talk about high society and the stuff that I knew about and that we'd make fun of with friends, like travel, nightlife, restaurants, all that stuff. High society gossip.”

Metaxa started posting anonymously, and about six months in, Cara Delevingne started following, and then “a lot more high profile, A-list type people.” Now, it's his full-time business. He has an agent and is trying to sell three TV pilots. Metaxa also uses Supersnake to create content for luxury brands, including everything from sneakers to nightclubs, whether it be in the form of videos, memes, Stories, or event coverage.

“I wouldn't know how to describe what Supersnake is,” Metaxa says. “It's now such a pillar of this world. The ironic thing is that I'm making fun of the world but the brand has become very important within it.”

NYLON caught up with Metaxa about Supersnake and the current wave of “eat the rich” satires in media.

What are the shows you’re working on?

Well, none of them have been made yet, but they're all kind of within the same realm. They're all comedy/drama, but more predominantly comedy focused on the same subject matter: high society, jet set people. Wealthy people. Just satirizing them. I talk about a lot of my content that is the party circuit: An international group of people that travels for these different cultural and sporting events, but they don't really have interest in what the events are. It's more about the parties around it. You've got Fashion Week; you've got Coachella; you've got Burning Man; you've got Formula One. What you begin to see is there are people that are not part of those respective fields that will just be there every single time because that's where the guys hang out, or that's where the beautiful women hang out, or that's where the powerful people, powerful men or women, tend to socialize. That's kind of the subject matter and the focus of most of my content – that type of person and those types of places that they frequent.

So I take it you are a White Lotus fan?

I'm a huge fan of The White Lotus. Huge fan of Succession. The White Lotus and Succession are the two comparables in my most recent show. I've written an animated show, which I've described in the pitch as a hybrid of South Park meets White Lotus with a hint of Succession. It's basically this world that I've created where all of the men are animals and all the women are regular women. It's set in New York, but each episode is in a different international place focused around an event.

With that one, the animals are meant to represent the different stereotypes that I talk about. The animal that they are is dependent on what type of man they are. Let's say the fat wealthy Russian oligarch is a blue whale. And then you've got the club promoters are rats scurrying along the floor. And then you've got the playboys, which are lions and so on and so forth. But all the women are regular women.

What’s interesting is that Supersnake is satirizing this world, but you're also part of it too.

I think I'm always toeing the line between not being a whistleblower that's doing these exposés, which has never given the intention. I think the humor is hidden behind layers of complex satire. And I think some people get it and some people don't. But regardless, the people that are the subject of the humor like it. Because they're like, "Oh my God. Finally, there's someone that's talking about this world that no one knows about it." They know about it all in detail. And then when they meet me, either they didn't know it was me doing it. That was before me sharing my face. Or they're like, "Okay. Well, this is a guy that is part of this world and is not some investigative journalist that's wormed his or her way into the world and is trying to write exposés." That's not the intention at all. It's more just a gentle satire.

But there are some more deeper themes deep down that I do try and touch upon, that I do find are problematic, like what I would describe as the trafficking of beautiful women around the world. It's not quite trafficking, but women being compensated to travel with wealthy men, which is just a bit strange. And then various other themes that I do touch upon in a more gentle way. It's not as direct and upfront, but I do think those are important to shed light upon. Not that I'm trying to pursue any sort of change, it's more just trying to make these people aware of the fact that they're ridiculous. But I don't think it's really worked because they still think it's cool.

There is a big interest right now in the one percent and how sinister that culture can be. Your account is definitely right along the lines of what is popular right now and what people are curious about.

Yeah, definitely. I think I deliver it in quite a peculiar way, so some people just don't get it.

You don't think everyone gets the memes?

Well, people get a bit too bogged down in the details and the specificities. They're like, "Oh, I don't know what spicy rigatoni is." Or they don’t know the terminology that I use or slang which is prevalent within the scene.

Some people do understand it, and I'll get messages from people. Like, "Hey, I have... Honestly, I have no idea about the details of what you're talking about. But it's really interesting to me that rich men go to charity events and fly in girls and all this stuff." And I was like, "Yeah, it happens."

So some people do understand it. And I'm not calling anyone out by name, but it's more the wider critique, which is fascinating.

NEXT UP
Nylon Nights
How Renzo Rosso Turned The Pelican Hotel Into A Miami Must-Stay
Culture
TikTok Dating Advice Is Hell On Earth
Entertainment
Meet Amy Allen, The Grammy-Nominated Songwriter Behind Pop's Most Honest Hits
Culture
6 Shows To Binge Once You've Finished 'The White Lotus'
Style + Culture, delivered straight to your inbox.