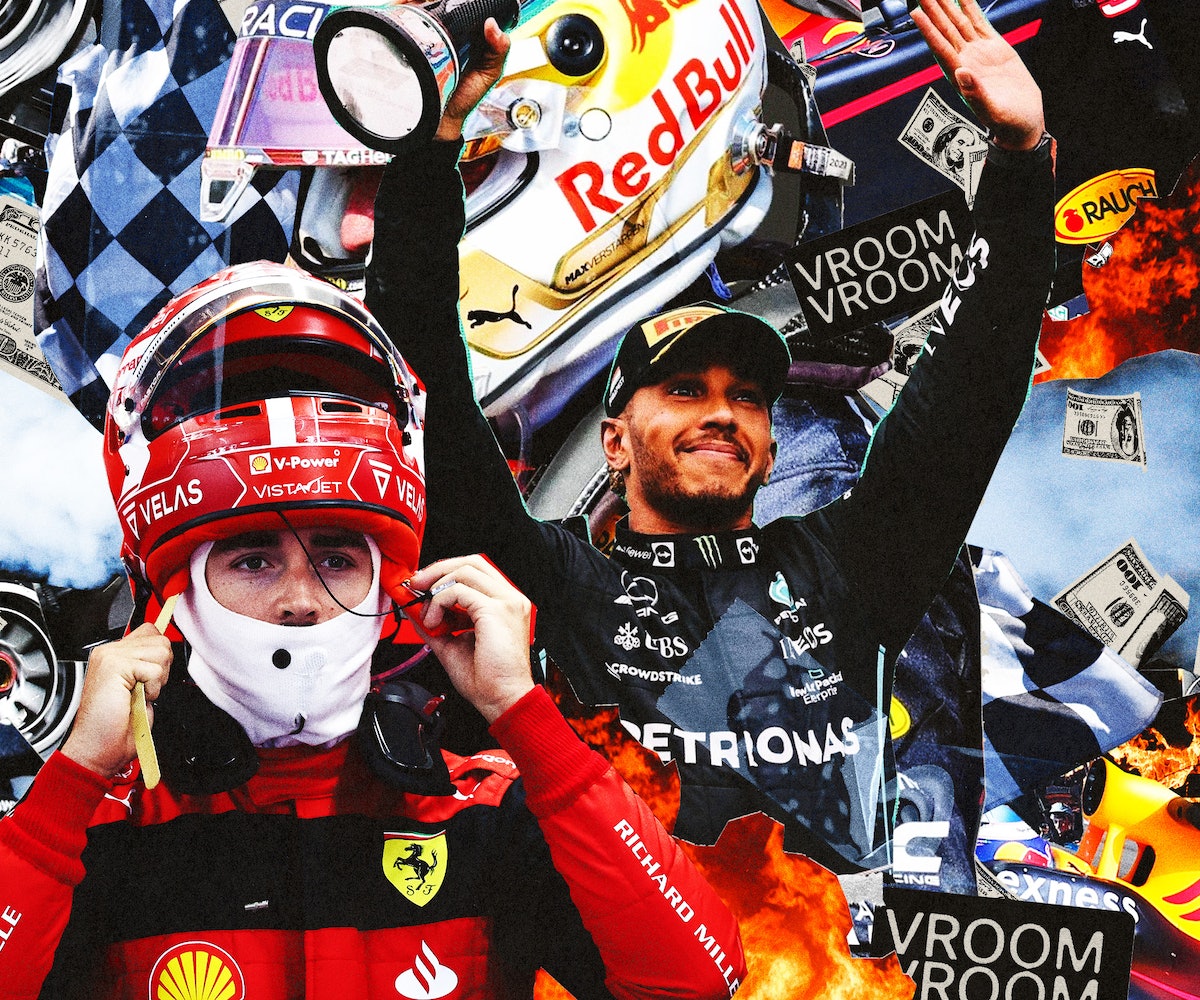 MacKenzie Reynolds was scrolling through Netflix’s catalog during the first lockdown of 2020 when she landed on a docuseries titled Formula 1: Drive to Survive — a behind-the-scenes look at the drivers and the races of the Formula One World Championship. She first heard about Formula 1 through her job in communications back in 2018, but she didn’t quite grasp its appeal until she watched the Netflix series — and from the first episode, she was instantly hooked. “The power, the money, the seriousness, the danger, the dedication from the drivers — it was intense,” she tells NYLON. “Plus, the first episode focused on Daniel Ricciardo, who is a total hunk and so charismatic.”

Formula 1, or F1 for short, has long been a fan-favorite sport in Europe since the early 1900s, but in recent years, it has garnered more attention in the United States. You probably have come across snippets of some of its larger-than-life personalities on social media, with #F1 gaining 36 billion views on TikTok alone. I mean, who doesn’t love fast cars, hot guys, and lots of money?

Eliza Huber, a 26-year-old fashion editor in New York City, says F1 has been her offline obsession for years, and that it serves as an interest that doesn’t correlate with her work. “I started watching F1 during the 2018 season, and it was only really because a few friends of mine were into it and they had the race on in their apartment one time. If I’m remembering correctly, it was the Russian Grand Prix and Lewis Hamilton won,” she recalls. “Even so, it was the Scuderia — Vettel was third — that immediately drew me in. I’ve been a Ferrari fan ever since.”

Huber gets her F1 news through a number of outlets like Twitter, motorsport journalists, along with alerts from ESPN, Planet F1, and podcasts. Huber is not a “huge sports fan,” but F1 feels different. “[There’s] something about the speed and the adrenaline involved that draws me in,” she says. “I also love the messiness of F1 in the sense that there’s always a bit of drama, whether it be during a silly season or with team principals fighting over the tiniest ruling.”

Brian Muller and Matt Elisofon, co-hosts of the Red Flags F1 Podcast, also trace their F1 fandom to Drive to Survive. After a friendship rift and watching DTS separately, they reconnected on the topic, crediting F1 with building a bridge between them again. Since launching their show, the duo can be seen chatting about things from competition season and the heated drama between teams, but ultimately, their podcast aims to make F1 content more accessible, especially with their American fanbase through humor. (We all want to know who ends up in “Daddy of the Week.”)

“I was blown away,” says Muller. “Here are these athletes who are so good-looking and have such egos. There’s this pageantry and money dependence that I didn’t expect at all.”

Hailing from London, the Quick Stop F1 podcast hosts Thandie Sibanda and Nyasha Sakutukwa reign as one of the few, if not the first and only, Black podcasts for Formula 1 fans. Sibanda and Sakutukwa’s show has amassed thousands of F1 fanatics on social media, Twitter especially. The pair stands out among other podcasts by breaking down the techniques and simplifying everything for those who don’t know. “Even if it’s been a bad race and your favorite drivers lost, we’re going to make it hilarious and help you see the fun side of everything to do with Formula 1. [Quick Stop F1] is really a Hitchhiker’s Guide to Formula 1,” Sibanda says.

But what exactly makes a “good driver” in Formula 1? According to the fans, it’s a cumulation of traits like great sportsmanship, team cooperation, and synergy between drivers and teams. While having a consistent pace and a developed car that uplifts and hails good results outside of the capability of the car are key, it boils down to the driver’s awareness on and off the track.

Sibanda and Sakutukwa explain that the best drivers are those who have a fast, consistent pace, on top of the team’s ability to develop a car that brings results that are likely beyond the capabilities of your car, with vehicles reaching 60 mph in roughly 2.6 seconds and a top average speed of 223 mph. “When you see a driver who’s consistently able to perform at a high level in any condition and in any car, those are normally the best drivers,” says Sakutukwa.

“A good driver needs to be smart and confident in their abilities, knowing when to go for a lunge, when to hold back for another lap, and how to mess with their competitors in order to get an advantage,” adds Huber.

For Reynolds, it’s the drivers’ endurance that really appeals to her as a fan. “The drivers put their bodies through extreme physical conditions every race — heat, g-forces, insane speeds, dehydration — and at the same time their mental abilities must be switched on at the highest level for a full two hours, thinking about strategies, memorizing the tracks, and working the complicated steering wheel,” she says.

But aside from the intricacies of driving technique, F1 fans are drawn to the sport’s place within global power structures. “There’s this added level of foreign aspects since the sport is so global, and there’s so much money involved,” says Muller. “There are also these big players, billionaire owners involved, too. This sort of power play adds a Succession quality to the sport.”

“The whole idea of ‘stan culture’ is essentially similar to a cult. And with every cult, comes a charismatic leader that has certain qualities that makes you follow this person.”

The world of F1 is packed with stiff competition, and a team’s success is not only limited to the drivers and their staff, but the fans also enable their faves to reach the top at any and all costs, from spending thousands to attending games around the globe to advocating for their top players online. Ferrari’s Charles Leclerc and Red Bull’s Max Verstappen have legions of fans, and Lewis Hamilton’s name is nearly always prefaced with “the greatest of all time.”

“The whole idea of ‘stan culture’ is essentially similar to a cult. And with every cult, comes a charismatic leader that has certain qualities that makes you follow this person,” Sibanda says. “For me, that’s Lewis Hamilton. He uplifts other Black people and stands for something like his kindness to animals and the environment, his affinity for fashion, and helping other people get into Formula 1 who aren’t from rich backgrounds. That’s what makes him [as a driver] so appealing.”

F1 drivers have become essentially celebrities and “brands” of their own, gracing magazine covers and launching their own companies on the side. “Lewis Hamilton was on the cover of Vanity Fair, and the Ferrari drivers were on the cover of GQ, so the cool kids know what’s up! There are more races being announced in the U.S., so it’s gaining traction,” says Reynolds. “Even watching the action around this year’s Miami Grand Prix was amazing. So many brands and celebrities activated around the moment. I think it still feels a bit out of reach for some consumers due to its ‘elite’ status.”

F1 is a historically white institution, and with that comes a diversity issue both in and outside of the sport. At times, the F1 fandom has been known to cultivate a toxic space. “I’m not going to lie to you, it’s a very wild place. And if the drivers are messy, then the fans are definitely messy,” says Sibanda. “If you don't like a certain driver because of the values that they have, it’s likely that their fans uplift those values. When I was in Sweden, I was at the airport and I was wearing this black Mercedes top. The Swedes are known to be a certain way towards other drivers, and it’s not Lewis Hamilton, so it felt that I was in ‘opp’ territory.”

Elisofon also notes the pushback their podcast gets from European fans, explaining that many take issue with the DTS to F1 pipeline, as well as how U.S. fans tend to treat the sport like a reality TV show. “When we post our videos, we usually talk about the drivers’ personalities, the psychology, their Instagram presences — that kind of stuff, and we’ve received a lot of pushback from European fans,” adds Muller. “But what’s met with that is all these American, newer, and younger fans who want to hear exactly those things, and that’s the part that interests them, as well. It’s more of a human interest side to it than maybe other sports that are maybe a little bit more focused purely on what's happening on the court or field.”

For those getting into the fandom, there are many starting points, especially with the 2022 World Championships well underway. Huber recommends going back and watching old, classic races. “The sport has been around for a long time, so I think it’s important to understand where it was compared to where it is now and appreciate just how dangerous the sport is,” she says. “It’s fun, of course, but also it has a sad, dark history, so knowing that I think is essential to being a real fan. 2012 is a great season to watch for newcomers.”

Ultimately, Formula 1 awakens an exhilaration in those watching from afar, knowing that not many could ever do or achieve even close to what these drivers have. “In a sense, these drivers are super-humans, and that sets them apart from other athletes,” says Sibanda. “And part of being a fan is being able to appreciate that aspect and the fact that the drivers are literally facing death at every turn.”