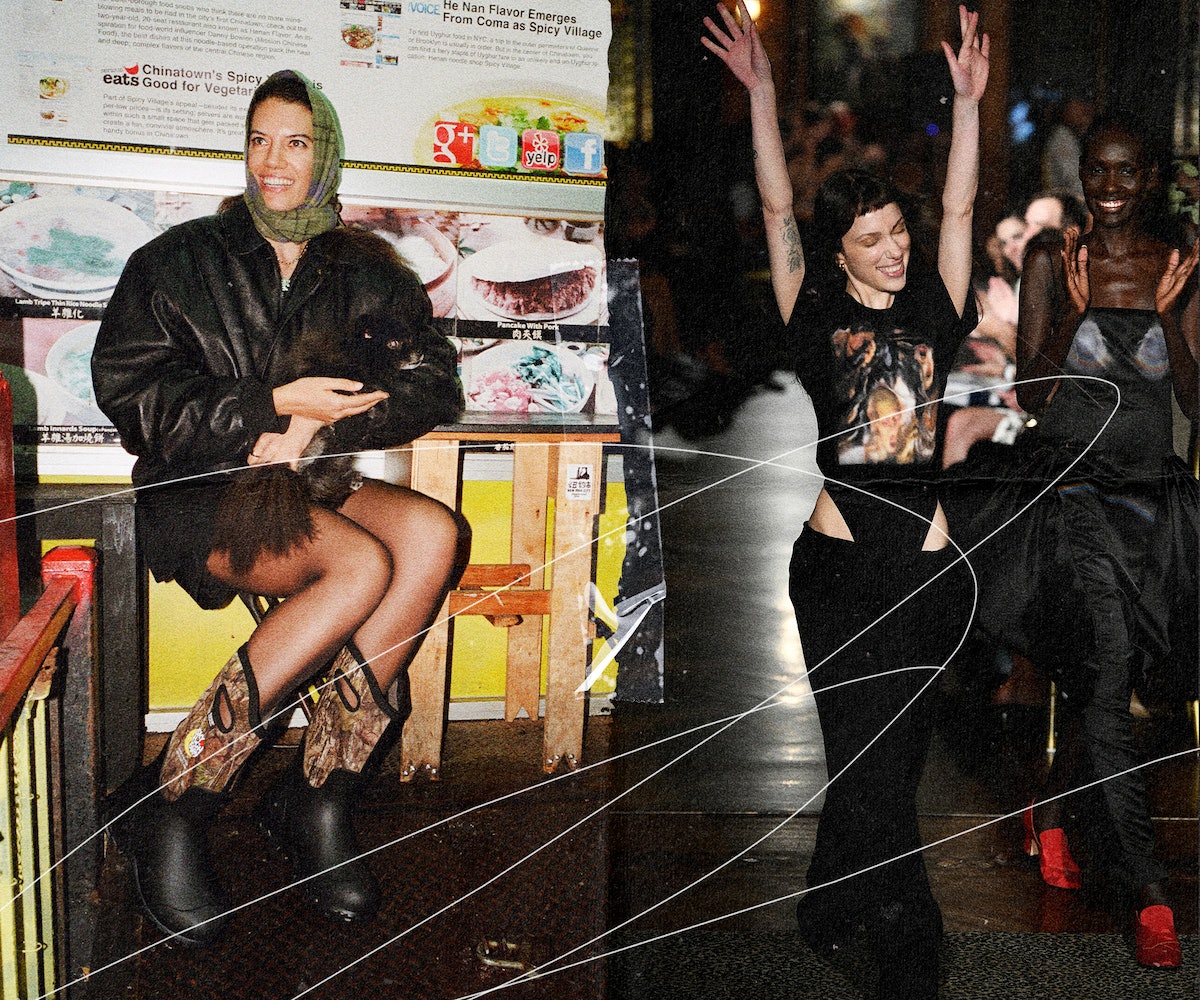 With the Metropolitan Museum of Art’s annual Costume Institute exhibitions regularly drawing record-breaking crowds and building a renewed interest in heritage couture brands like Schiaparelli or Jean Paul Gaultier, there’s no denying that fashion is an art form in and of itself.

But lately, it seems like the coolest clothes you can buy are made by actual, literal artists — as in, people with a background in the fine arts who have moved into the fashion world. Dan Colen — the artist who once appeared on the cover of New York Magazine alongside Dash Snow and Ryan McGinley, and whose sculptures are seen everywhere from the Gagosian to the U.N. Plaza — now has Sky High Farm Workwear, a line that features designs from Colen and art scene friends with a portion of the proceeds benefiting the nonprofit Sky High Farm.

Sterling Ruby, whom the New York Times named as one of the most interesting artists of this century, went from collaborating with Raf Simons on both his eponymous brand and at Calvin Klein to launching a fashion label of his own, S.R.STUDIO.LA.CA., in 2019. The line between gallery-worthy paintings and skate-ready puffer jackets blurs with Colm Dillane’s LVMH Prize-winning KidSuper, where every graphic piece features Dillane’s original artwork.

If there’s one designer who exemplifies this style moment, though, it’s Puppets and Puppets founder Carly Mark. As an art kid in high school, she was interested in fashion but didn’t think it could be for her, career-wise.

After a decade working at galleries and in her own fine art studio, where she developed a following for her paintings of snack packages (like a piece inspired by Haribo Gummy Bears shown at The Armory) and similarly-themed videos starring the likes of Eric Wareheim, Mark realized she wasn’t feeling fulfilled. It turned out that art is a business, just like anything else, and the practice of making her work could be lonely. “At least for me, my art practice, I had assistants, but art practices in general feel pretty isolating — at least the way that I really liked to do it. With fashion, it really takes a village — or, I like to call it a circus — to get anything done,” she explains.

There were a few different avenues she wanted to try in 2018, but the first would turn out to be Puppets and Puppets, where Mark combines her sculptural and graphic approach to art with a “less is more” consumption ethos. Finally, everything clicked into place for her.

“I loved the transparency of it — I love that you know you're making a product, that is what you are here to do,” says Mark. “Then once the product is made, it goes onto a body, and every body is different; everybody styles it differently, and it moves in the world. There's something more transcendental to me about it than [what] I've found in art.”

Now, fans can pick up pieces of Mark’s art for far less than they would have if they’d wanted to buy, say, a painting: One of Puppets and Puppets’ cookie bags goes for around $475, while a painterly coat is around $1,500.

A Sky High Farm Workwear hoodie will set you back around $200 — a downright steal compared to the $3 million price tag his 2005 flame paintings, “Untitled (Fire, Red/Black U),” earned at auction in 2014; on the opposite end of the spectrum is a $1,000 graphic tee from S.R.STUDIO.LA.CA, which is still a fraction of the €58,000 you’d spend on one of Ruby’s original ceramics. And at KidSuper, the Sotheby’s puffer printed with Dillane’s work is $500; one of his original paintings sold at a Dazed exhibit in South Korea for 40 times that price.

Even better, that investment lives a life bigger than it otherwise would in, say, your living room. “You enjoy both daily, but in very different ways,” says Cary Leitzes, founder and president of LEITZES&CO, the creative agency behind some of fashion’s biggest art collaborations in recent history. (Think: Cindy Sherman for MAC, or Kenzo’s Antonio Lopez-inspired Spring 2017 collection.) “Artwork you live with, it's on the wall; clothes, I see as an expression of who you are — it’s a signifier.”

A certain creative freedom can also exist for designers who didn’t get traditional fashion-school training. “Because I don't know the rules, I don't know if I'm doing something wrong,” Mark says. She has a team of people at Puppets and Puppets who did go the Parsons/Pratt/FIT route who can help turn her ideas into wearable garments — but her perspective often means she can structure clothing in unorthodox ways.

“I'm looking at the thing as it is, I'm not thinking about it as it should be,” she explains. “I understand getting in your head about something when you've been taught to do it a certain way, or you have different voices in your head — teachers, mentors, et cetera — but I don't have any of that.”

Mark uses the example of some early boned pieces in her collection, which weren’t quite coming together in the shape she wanted. The team knew they were running into technical issues from their training, but Mark approached it without any expectations of how it should be built and was able to solve the problem with just a piece of string.

Maybe that means fine artists won’t always make the most technically impressive clothing, but that doesn’t lessen the impact of their ideas. “Great creatives can fluidly transfer their vision into multiple mediums; part of fashion is self-expression through clothes, whereas artists [find] self-expression through whatever the medium is,” Leitzes says. “A creative mind, if they've created a world and an identity and a language of their creativity, they can filter that through multiple varieties of mediums.”

At the end of the day, though, two creative minds are almost always better than one — which is why, for Leitzes, the best way to meld the worlds of fine art and high fashion is through collaborations between artists and designers. Artists are accustomed to a more solitary way of working and a slower process, whereas designers are used to meeting the fast-paced demands of the fashion calendar in a more crowded studio.

“To put the two together, and have to work in a different way, different set of parameters, different resources, is inspiring to both sides and that's where I think the best collaborations come out of,” Leitzes says. “There's a lot of mind expansion that goes into the collaboration when you have two creatives from slightly different fields.”

She cites Marc Jacobs, both as his own line and through his work at Louis Vuitton — where he regularly collaborated with museum-level artists like Takashi Murakami, Richard Prince, and Stephen Sprouse — and Kim Jones as creatives approaching artist collaborations in a brilliant way; wherever art can meet fashion, though, is a win. With lines like Puppets and Puppets, it can make fine art more accessible to a wider audience.

“I want people to interact with what I'm making; if it's just like sitting somewhere making other people feel dumb, or left out, what am I doing? Not spending my time well, in my opinion,” Mark says. “That's why I love my puppet sweater and my cookie bag because you can buy them, you can exist in the world with them. They might be a little weird, but they're quite practical, and you can be part of that — I want you to be part of that.”