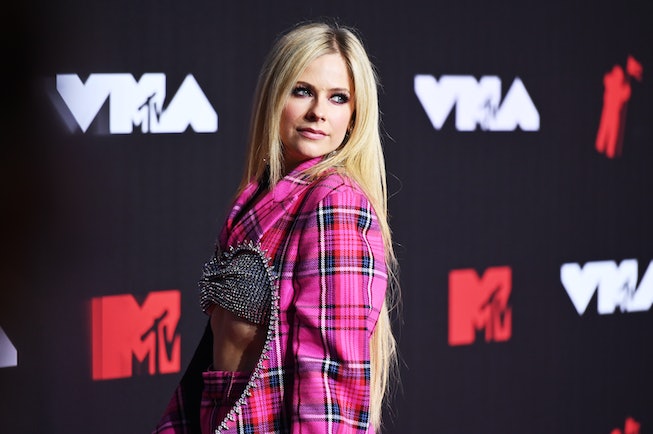 Nothing better has come along with the pop-punk revival than new Avril Lavigne music. And that’s saying a lot, considering that the revival has also brought us Olivia Rodrigo and the return of the plaid pleated skirt. Of course, Lavigne has released new music since 2004, but that is if you count the Harajuku era, which was so misplaced it contributed to a long-running conspiracy theory that the artist actually passed away in 2003 and was replaced by a lookalike named Melissa.

Lavigne made her TikTok debut earlier this summer, greasing the wheels of the ever-spinning 20-year trend cycle by posting a skateboarding video with Tony Hawk, because it’s 2002 all over again. And in November, she posted a teaser of her newest song on TikTok with Travis Barker playing the drums, which currently has 23.1 million views. Now, she’s signed to Barker’s DTA records and has released her first single, “Bite Me,” off her upcoming album. Here’s everything we know so far about Lavigne’s return to music.

The album is called Love Sux

Fittingly, the singer’s return to pop punk is called Love Sux, and will be released on February 25, just in time to nurse fragile hearts from the disappointment of Valentine’s Day. On the moody album cover, Lavigne is decked out in all black pop-punk essentials: lace-up pants, platforms, tons of black eyeliner, and a bunch of black balloons to hammer it in.

The second is called “Love It When You Hate Me”

Lavigne posted on Twitter on January 12 that her next single “Love It When You Hate Me” will feature blackbear and is out on January 14. Good news for longtime fans: The clip sounds very 2002 Avril.

4. I Love It When You Hate Me (featuring blackbear)

12. Break Of A Heartache

If “Bite Me,” a high-energy, true head-banger is any indication, Lavigne’s new music is going to be a return to her pop-punk roots. Her 2019 album Head Above Water saw her going in more of a pop singer-songwriter direction, with the album featuring a black-and-white photo of her naked holding a guitar, sitting in a shallow body of water. The album art for “Bite Me” is bringing back everything pop-punk we love about Lavigne: a plaid skirt, black corset, and in Olivia Rodrigo fashion, a black-and-red cake that reads “Bite Me.” She’s always been pop-punk at heart — and the world is finally ready to welcome her back.

“Bite Me” is a breakup anthem

“I am excited to be dropping ‘Bite Me.’ It’s an anthem about knowing your worth, what you deserve, and not giving someone a second chance who doesn’t deserve you,” Lavigne said in a release. Yesssss.

She’s been working with Travis Barker for a long time

“Avril and I have been friends for a long time, but I think I’ve been a fan of hers even longer! She’s a true badass and an icon as a performer, songwriter, and presence,” Barker said in a release. “We had gotten in the studio earlier this year, and we were having so much fun that I knew I wanted to ask her to join the DTA team.” Thinking about Lavigne and Barker just “getting in the studio” together is enough to make me express order black jelly bracelets.

The two artists go way back: Barker also helped produce Lavigne’s 2007 album The Best Damn Thing. “I have really enjoyed watching him develop into the producer that he is today. We spent a lot of time writing songs and working on this record together, and signing to his record label, DTA felt like the perfect home for me and my new music,” she said in a release. “Travis understands my vision as a musician, my creative process as an artist, and my goals at this stage of my career.”

This article was originally published on November 10, 2021