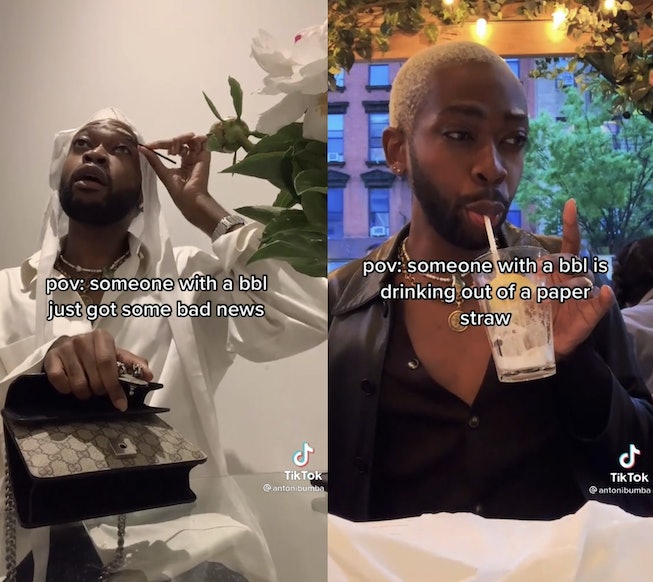 Open your third eye for one second and listen: Hot Girl Summer ran so The BBL Effect could sprint. For the uninitiated, BBL is short for a “Brazilian Butt Lift,” a fat transfer operation that takes fat from one part of the body and adds injects it into the buttocks for an enhanced and more voluminous ass. It’s the celebrity procedure du jour (although good luck getting most famous people to admit that!) and the premises for one of the funniest meme trends on TikTok.

Spearheaded by New York City-based creator Antoni Bumba in late April, The BBL Effect pokes fun at the recipients of the procedure, and how it inadvertently rewires their brains and mannerisms for a whole new attitude. Bumba’s BBL Effect character is a bad b*tch incarnate: a haughty attitude, immaculate hair and makeup, and always exuding a sense of fabulous unattainability.

“They’re always mildly unimpressed no matter how much money is spent,” writes Bumba in a description of the their BBL Effect character in the club post-vaccine. Yeah, she might be having fun, but she’s had more fun before. Next!

The BBL Effect character is just like you — only so much better. Bumba puts their character in everyday situations: think exiting an Uber, ordering dinner, finding out something bad, but all with the unmistakable and highly entertaining air of hubris. Yes, she’ll cry once in a while, but you better believe she’s delicately dabbing away at her tears. She just got her lashes done and is not trying to mess them up. Even something as banal as drinking from a straw is different when you’ve got a BBL; it’s a tongue-first situation, complete with a smug look around the restaurant to make sure everyone has their eyes on you.

Bumba’s impeccable BBL Effect characterization is so on point that it birthed a slew of fans who put their own spin on the meme, all soundtracked by “Knock Knock” from 19-year-old Atlanta rapper SoFaygo. For the BBL Effect, everything and everyone is fair game, from the casual adjustment of a hijab to the Pope himself. Tap into your own BBL attitude and watch Bumba’s character take over TikTok below.

NEXT UP
Fashion
How To Wear 2022’s Biggest Denim Trends, According To A Stylist
Fashion
Paloma Elsesser Launches First-Ever Plus-Size Collection With Miaou
Fashion
Rihanna Is Opening Savage X Fenty Stores In 2022 — UPDATE
Fashion
Behind The Scenes With Laura Harrier For The 2022 Met Gala