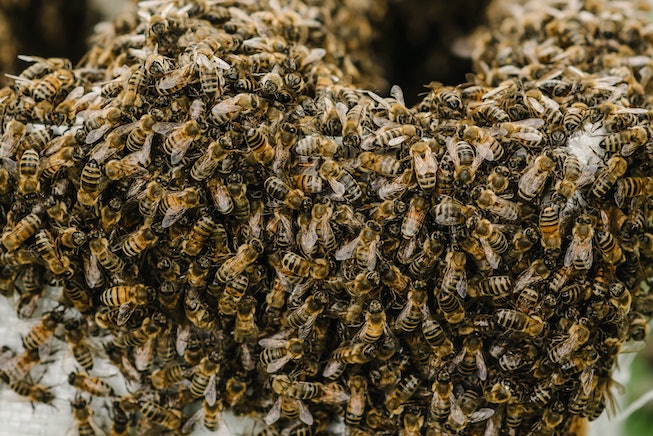 Every few months, Twitter erupts in awe over a TikTok of a beekeeper who seems incredibly lax in regard to her approach to bees. As a beekeeper and removal specialist, the Bee Lady AKA Erika Thompson’s job is to make sure that bee hives are carefully extracted from their poorly-placed locations — think everywhere from under floorboards to literal toilet tanks, which she documents on her TikTok @texasbeeworks — and safely placed in a new ones. She’s rarely seen wearing the clunky beekeeper costume we’ve come to assume is part of the job. In fact, she regularly scoops bees with her hands from one hive into the next. Thompson talks about the “gentle honey bees” in a soothing, ASMR-worthy voice. Who knew bees were such docile little creatures, right?

Wrong! Allegedly, this PR for bees is too good to be true. Back on May 22, another professional bee removal specialist on TikTok, @lahoneybeerescue, posted a video in the midst of a swarm of bees up high in a tree. The vibe could not be more different than the image of bees that Thompson shows. The bee removal specialists are completely obscured in protective equipment, and the bees straight up do not seem pleased to have them there. “These bees are all trying to sting me,” says the beekeeper amidst the deafening buzz of bees. “This is why what Texas Bee Works [does] is dangerous. She doesn’t show this.”

“The Bee Girls Are Fighting”

To quote writer Bolu Babalola: “Not this...the bee girls are fighting.” The person behind @lahoneybeerescue posted follow-up videos clarifying the initial call-out. Essentially, the criticism of Thompson’s beekeeping image is that it sets a dangerous precedent for non-beekeepers. Thompson’s version of bee removal seems so gentle — and dare I say fun? It seems like even the most bee-adverse people can scoop up bees into their new hive and do their part in saving the bees. She even makes a swam of bees seem somewhat inviting and not like a living nightmare. A true feat!

And that seems to be the problem. @lahoneybeerescue alleges that Thompson’s work is doctored: “I don’t know if you’ve noticed, but @texasbeeworks doesn’t carry ladders, she doesn’t carry power tools. Her husband does all of that. She’s a beekeeper, she’s not a bee removal specialist.” (Thompson is seen using power tools and beekeeper headgear in a video from September 17, 2020).

Have we been duped?

@lahoneybeeresue continues her explanation, noting that Thompson’s long hair, casual clothes, and exposed skin are hyper-unrealistic in the world of bee removal specialists. She also states that a beekeeper or bee removal specialist can’t tell if a bee colony is africanized — what we as normal bee-fearing people refer to as “killer bees” — just by the bees’ size and color. One must antagonize the colony to find out for sure, and that’s something that Thompson never shows to her followers.

On June 6, Thompson released an Instagram statement on the now-viral accusations. She called the allegations “untrue and hurtful” and noted her disappointment at the media coverage. “It’s a sad day when people see a woman doing something that’s so outside of the norm, they assume there’s no way she can actually be doing those things, and if she is, she must be getting help from a man.”

She continued: “As a professional beekeeper, it’s my mission and my purpose to help people understand and appreciate the work of bees and beekeepers, and I’d really like to get back to doing that now. If you see a swarm or hive of bees that needs to be removed, don’t call an exterminator, call an experienced beekeeper to relocate the colony. Experienced beekeepers are the only ones who should be handling bees in these situations, because sometimes... bees need a helping hand.”

NEXT UP
Beauty
This Viral Black Honey Lipstick Dupe Is Only $5
Entertainment
19 Niche Music Festivals For Every Type Of Person
Entertainment
Meet Andreas Metaxa, The Man Behind The Miami Jet-Setting Memes Of Supersnake
Fashion
Meet The Depop Seller Making Belts Out of Tiny Bonne Maman Jars
Style + Culture, delivered straight to your inbox.