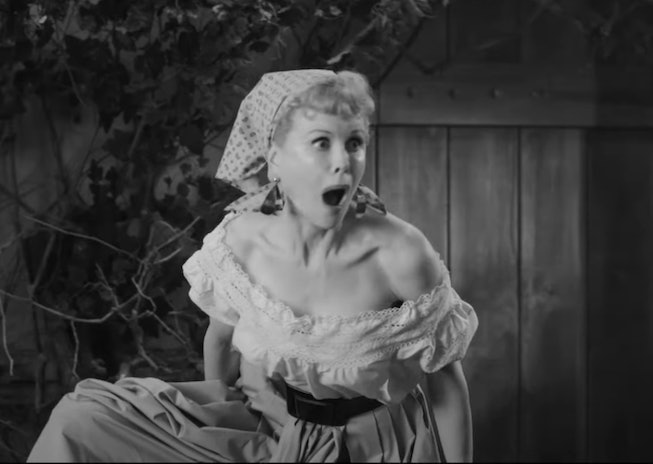 When it was announced that Nicole Kidman was set to take on the role of Hollywood’s most iconic redhead, Lucille Ball, the internet had a minor freakout. Was the acclaimed Australian actress the right person to inhabit the all-American Ball in Being The Ricardos? The haters can get bent, as the film’s first teaser trailer proves that maybe the four-time Oscar nominee has what it takes after all.

“I am the biggest asset in the portfolio of the Columbia Broadcasting System. The biggest asset in the portfolio of Philip Morris Tobacco, Westinghouse,” says Kidman as Ball. “I get paid a fortune to do exactly what I love doing. I work side-by-side with my husband who is genuinely impressed by me. And all I have to do to keep it is k*ll for 36 weeks in a row. And then do it again next year.”

Being The Ricardos chronicles a tumultuous five days in September 1952 as the cast and crew of I Love Lucy prepare for "Fred and Ethel Fight," the episode about Lucy’s attempts at reconciling the Mertzes as a separation looms. But behind the scenes, Ball and Desi Arnez (Javier Bardem) deal with crises that completely eclipse marital drama. Not only is Ball under investigation by the House of Un-American Activities Committee for ties to Communism and Arnaz's cover story spread in tabloid Confidential titled "Desi's Wild Night Out." Lucy’s got some ‘splainin to do, thanks to rampant McCarthyism!

“You know, I did this show so Desi and I could be together,” says Kidman. “I had no idea it was going to be a hit.” And boom! We see a Kidman transformed with coiffed hair and huge eyes as she recreates the show’s iconic grape stomping scene. The trailer shows glimpses the rest of the star-studded cast, including Bardem, Tony Hale, J.K. Simmons, and Jake Lacy.

Written and directed by Aaron Sorkin, Being the Ricardos prides itself on showing the private side of one of Hollywood’s most legendary couples. "The only thing better than a story people don't know is a story that people think they know but they're wrong," Sorkin said in an interview with EW.

Being the Ricardos is also a family affair. Lucie Arnaz, daughter of Ball and Arnaz, was directly involved with the production, including the disputed casting and script. Arnaz called the viewing experience “very emotional,” considering how it touches on the hardships in her parents’ marriage. "There are some moments that were harder for me to experience than they likely will be for the general public," she said. "But those moments were handled with such compassion that it wasn't as depressing as it could have been."

Being The Ricardos hits theaters December 10, and will be available to stream on Amazon Prime Video starting December 21. Watch the trailer, below.